As Turkish vessels are dispatched near Greek territorial waters, analysts say tensions in the eastern Mediterranean Sea could quickly escalate if leaders on both sides do not reengage in diplomatic talks. 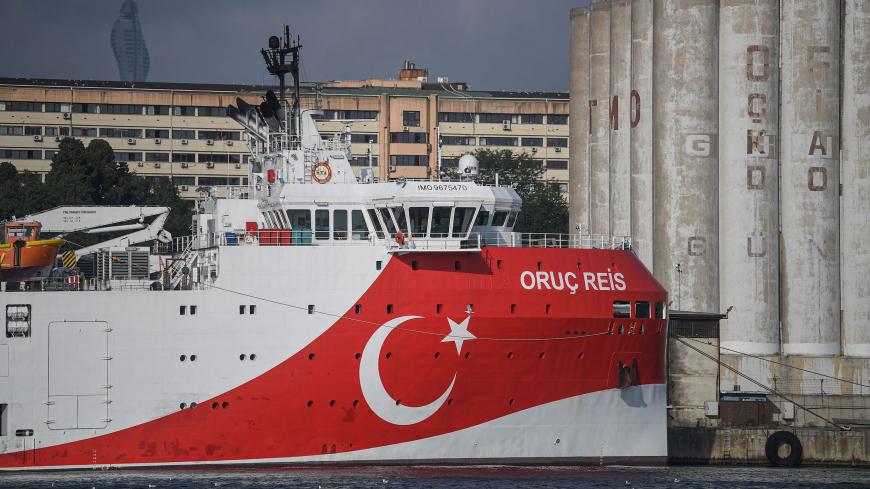 ​ISTANBUL — The Greek Foreign Ministry called on Turkey to stop what it deemed “illegal” gas exploration activities in the eastern Mediterranean Monday amid a potentially dangerous escalation between the two nations over contested maritime claims in the region.

The developments come after Turkey issued a navigational communication known as a Navtex Monday, stating the seismic research vessel Oruc Reis would be conducting surveying activities south of the Greek island of Kastellorizo until Aug. 23. At the same time, Turkey began two days of naval exercises Monday southeast Kastellorizo and the island of Rhodes.

On Friday, Turkish President Recep Tayyip Erdogan announced Turkey would resume its search for energy resources in the region following the breakdown of informal talks between Ankara and Athens, which had been in negotiations to resolve longstanding maritime delimitations between Greek islands and mainland Turkey.

Negotiations were shelved after the Athens government signed a maritime boundary agreement with Egypt Thursday, negating previous territorial claims by Ankara established in a November memorandum with Tripoli’s Government of National Accord (GNA) in Libya.

“We were engaged in talks with Greece for the last two and a half months in Berlin and had even agreed on a joint statement but Greece announced its deal with Egypt just a day before it,” presidential spokesperson Ibrahim Kalin told CNN Turk in an interview Sunday. “It is out of question for us to approve any move that will condemn Turkey to the bay of Antalya and exclude it from the eastern Mediterranean. But we still prefer to solve issues through dialogue.”

Now, as Turkish vessels are dispatched near Greek territorials waters with the Greek navy on standby, a dangerous game of brinkmanship is underway in the eastern Mediterranean that analysts say could quickly escalate if leaders on both sides do not reengage in diplomatic negotiations.

“As I understand it, Greek admirals have orders to prevent drilling in disputed areas, especially in the region near Crete,” Erol Kaymak, a professor of political science and international relations at Eastern Mediterranean University in Northern Cyprus, told Al-Monitor. He continued, “It seems there is a concern that the moment a drill touches the sea basin it confers rights onto Turkey. On the other side, Turkey is not deterred. So, yes, this could very well lead to further escalation.”

Naval mobilizations by both nations are “extremely worrying,” EU foreign affairs chief Josep Borrell said in a statement Sunday. Borrell, who has worked to mediate Turkey-Greece tensions in recent months, said maritime boundaries should be defined through dialogue and urged both sides to reengage in negotiations.

Despite the escalation, some analysts said the lapse in bilateral talks may be temporary. Zenonas Tziarras, a researcher at the PRIO Cyprus Centre and co-founder of Geopolitical Cyprus, said Turkish officials likely needed to save face by responding to the Greece-Egypt agreement for domestic and international audiences.

“If [Turkey’s] activities remain within areas that are not delimited, it is likely that tensions will not lead to any hot incidents, especially if external actors like the United States and Germany try to once again play a de-escalating role,” Tziarras told Al-Monitor.

In late July, previous Turkey-Greece tensions subsided following a phone call between Erdogan and German Chancellor Angela Merkel. The conversation is alleged to have fostered diplomatic negotiations between the two nations, and the United States is also believed to have soothed discord at the time by holding joint exercises with the Turkish navy on July 29.

While current tensions stem from the Egypt-Greece agreement, Tziarras said it is too early to dismiss the possibility of new dialogue in the near future.

“Turkey is not as annoyed with the Egypt-Greece deal as it likes to show because it leaves open the prospect for a Turkey-Egypt and Greece EEZ boundary,” he said, using the acronym for an exclusive economic zone in which states claim rights over resources.

He said the Greece-Egypt agreement could prove beneficial for all sides as it “directly disputes the arbitrary Turkey-GNA EEZ deal, creates an important legal and political precedent and sets the foundations for further maritime zone settlements in the area — be it through bilateral [or] multilateral negotiations or arbitration.”

Still, Ankara officials claim Greece’s many islands, some of which sit just a few kilometers off Turkey’s coast, bestow Athens with unjust territorial sovereignty over what they see as Turkey’s continental shelf. Speaking to reporters in Lebanon during a weekend visit, Turkish Foreign Minister Mevlut Cavusoglu said Ankara would continue to seek diplomatic solutions despite the Greece-Egypt agreement, which his ministry deemed “null and void” upon announcement.

“Firstly, no one can accuse us of causing tension,” Cavusoglu told reporters. “Plus, nobody can urge us that we cannot deploy our vessels to said regions. Even though they urge, we won’t listen. Because it’s now obvious that it’s Greece who does not want dialogue.”

At the heart of the matter is the UN Convention of the Law of the Sea (UNCLOS), which defines nations’ maritime rights and upholds current Greek territorial claims in the Aegean and Mediterranean seas via the nation’s many islands. Turkey is not a signatory of the UNCLOS and some Ankara officials claim they are not legally bound by the agreement.

“Turkey wants to sign a maritime delimitation agreement with Greece and is using coercive diplomacy to bring Greece to the negotiation table,” Unluhisarcikli told Al-Monitor. While Unluhisarcikli framed recent events as Ankara responding to Anthens’ “maximalist approach with its own maximalist approach,” he also believes current tensions would likely subside with the third-party mediated talks in the near future.

“Armed conflict between Turkey and Greece is strongly against the interests of NATO and the interests of the United States,” Unluhisarcikli told Al-Monitor. “I think there will be stop mechanisms.”