Amid maritime boundary disputes in the eastern Mediterranean and after a 2020 gas field discovery the Black Sea, Turkey’s state-owned oil and gas company is finalizing the purchase of a fourth drilling ship to expand its energy development activities. 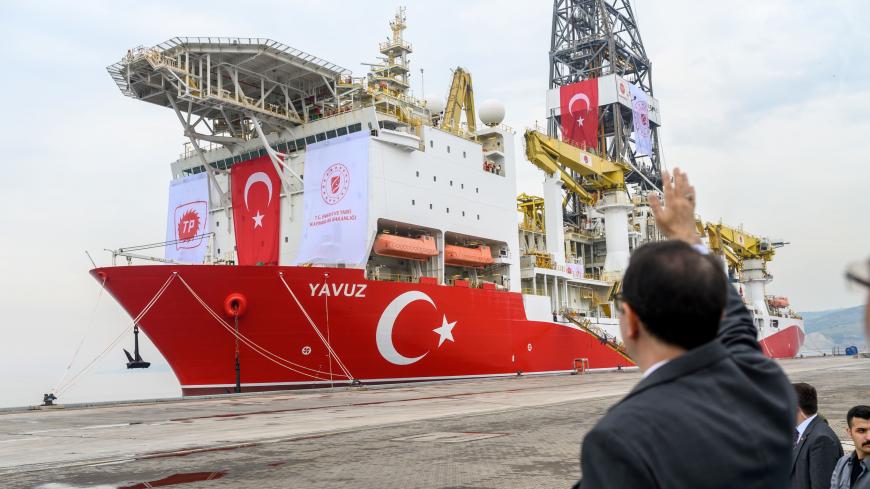 Turkish Energy and Natural Resources Minister Fatih Donmez waves to the drilling ship Yavuz, scheduled to search for oil and gas off Cyprus, at the port of Dilovasi, outside Istanbul, on June 20, 2019. It was reported in February 2021 that Turkey has made an agreement to buy a fourth drilling vessel. - BULENT KILIC/AFP via Getty Images

ISTANBUL — Turkey’s state-owned oil and gas company has made a preliminary agreement to purchase a new drilling vessel to accelerate energy prospecting activities in the eastern Mediterranean and the Black Sea, according to Turkish media.

The Turkish Petroleum Corp. is finalizing a deal to acquire a deep-water drilling vessel from Dolphin Drilling, a Norwegian rig company, for a yet-to-be disclosed sum, the media said.

The purchase would add a fourth drilling ship to the company’s fleet, which includes two additional seismic exploration vessels, and comes after a year marked by maritime boundary disputes in the eastern Mediterranean stemming from Turkish energy prospecting activities in areas claimed by Greece and the Republic of Cyprus.

Turkey largely suspended its energy projects in the eastern Mediterranean after EU leaders agreed in December to draw up sanctions over the nation’s activities and Ankara resumed high-level talks with Athens to de-escalate tensions in January.

The developments drew praise from German Chancellor Angela Merkel in a recent call with Turkish President Recep Tayyip Erdogan, yet the purchase of a new drilling vessel has raised concerns territorial disputes could resume in the region.

“A fourth drill ship could … indicate Turkey's plans to drill in locations off Greece, including key Greek islands such as Kastellorizo and Crete,” Zenonas Tziarras, a researcher at the PRIO Cyprus Centre, told Al-Monitor. “The latter scenario has been feared for some time and, should it happen, will stir a new crisis between Greece and Turkey.”

Details remain sparse on the new vessels’ planned use, but Turkish Energy and Natural Resources Minister Fatih Donmez said in October that officials were seeking to lease or acquire a new ship to expand drilling capacity, possibly in the Black Sea.

In August, Turkey announced the discovery of the Sakarya gas field 175 kilometers (110 miles) north of its Black Sea coast. The reserves are estimated to hold 405 billion cubic meters of natural gas, about eight times the nation’s annual consumption, opening the way to less dependence on energy imports.

Officials plan to establish up to 40 wells in the field, where drilling activities are ongoing, and Turkish Petroleum is considering partnerships to raise funds this year with aims to start production in 2023 — the nation’s centennial and a scheduled election year.

Noting that Ankara officials have sought to make Turkey an energy transit hub amid discussions of possible gas export projects from eastern Mediterranean fields to European markets, Michael Tanchum, a professor of international relations at the University of Navarra, said Turkey’s lack of significant energy resources outside the Black Sea will likely drive the Sakarya field’s rapid development.

“Even though Turkey is developing its rich renewable energy resources, Ankara faces an immediate pressing need to diversify its natural gas supply mix through the development of its newly discovered finds in the Black Sea as well as potential finds in its other territorial waters,” Tanchum told Al-Monitor.

Turkey’s Black Sea gas projects also benefit from the lack of territorial disputes the nation faces in the eastern Mediterranean. Dimitar Bechev, a nonresident senior fellow at the Atlantic Council, said the development of Black Sea gas could serve to boost morale in Ankara, and among voters, as Turkish officials wind down energy projects elsewhere and resume negotiations with Greek counterparts.

Bechev said gas extracted from the Sakarya field would add leverage to Turkey’s future negotiations with Russia’s state-owned energy company, Gazprom, which serves Turkish markets on costly take-or-pay terms that set predetermined cost agreements, regardless of whether or not gas is imported.

“The bulk of Turkey’s contracts with Gazprom are expiring in the next one to four years,” Bechev told Al-Monitor.

Currently, Turkish Petroleum’s Fatih drilling ship is conducting work on the Sakarya field, where it is expected to be joined by the Kanuni drilling ship in late March. Meanwhile, the Oruc Reis seismic research vessel continues survey activities near the Mediterranean coastal city of Antalya and the Barbaros Hayrettin Pasha research vessel stopped its work near Cyprus on Jan. 14, returning to port in Mersin. The Yavuz drillship is also undergoing maintenance in Mersin.

Turkey’s energy prospecting activities in the eastern Mediterranean have impacted reunification efforts in Cyprus, where offshore gas finds in the 2010s were initially saw as an avenue to help resolve disagreements over sovereign rights between the island’s two governments.

Recent statements by Erdogan and his Turkish Cypriot counterpart Ersin Tatar have both pointed to a two-state solution as an alternative settlement to stalled UN-led talks. Amid the current state of politics in Cyprus, Bechev said energy developments on either side of the island would face significant obstacles.

“I don’t think there will be gas or oil coming from Cyprus anytime soon because both parties have the means to be a spoiler for the other party,” Bechev told Al-Monitor.