At a time when tensions are on the rise in the eastern Mediterranean, Egypt and Cyprus are intensifying talks to start building an offshore gas pipeline from the Aphrodite gas field to Cairo in preparation for re-export to Europe. 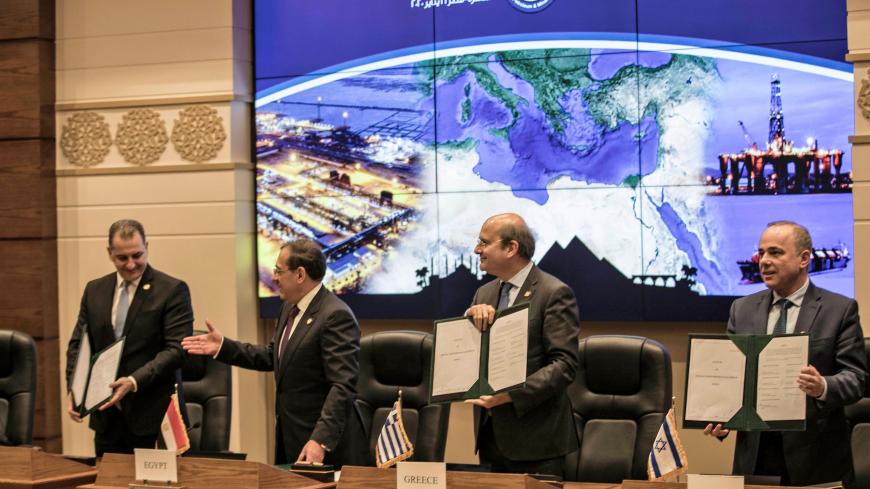 At a time when the oil and gas industry is facing economic uncertainty as part of the consequences of the coronavirus pandemic and the decline in global prices as a result of an oversupply, the eastern Mediterranean region is marred by a frantic struggle over natural gas resources.

Eastern Mediterranean countries have rushed to demarcate their maritime borders and exclusive economic zones in a bid to facilitate the gas exploration process.

The United States Geological Survey estimated the natural gas reserve in the Mediterranean in 2017 at 340-360 trillion cubic feet with a financial value ranging between $700 billion and $3 trillion.

While eastern Mediterranean countries have ambitious projects to gain a foothold in the European market with natural gas exports, the European Union (EU) is seeking alternatives to its dependency on Russian gas, as Russia is the third-largest oil producer in the world.

One of these projects sought by the EU consists of establishing a direct marine pipeline between Egypt and Cyprus to transport natural gas from the Aphrodite gas field in Cyprus, which contains approximately 129 billion cubic meters of gas, to liquefaction plants in Egypt and then re-export it to the European market.

Egypt and Cyprus signed an agreement in September 2018 to establish the marine pipeline project.

In this context, an Egyptian government official told Al-Mal economic newspaper Aug. 31 that intensive discussions are currently taking place between the two countries in order to complete the project as scheduled. The Cyprus gas is expected to arrive in Egypt in 2024-25.

The official said that the Egyptian-Cypriot gas pipeline will contribute to supporting growth and offsetting the economic repercussions of the coronavirus pandemic, hence the need to accelerate the implementation of the new project.

On Aug. 5, Egyptian Petroleum Minister Tarek El-Molla discussed via video conference with Cypriot Minister of Energy Natasa Pilides the establishment of a direct sea pipeline between the two countries. According to a statement by the Egyptian Ministry of Petroleum, the two ministers confirmed the ongoing coordination between the officials of the two countries to follow up on the measures needed to start implementing the project.

Gamal al-Qalyubi, a professor of petroleum and energy engineering at the American University of Cairo, told Al-Monitor that Egypt has all the capabilities and infrastructure needed to complete the project, whose cost is estimated at $1.3 billion, and bring it to fruition.

He said that Egypt is outperforming its eastern Mediterranean neighbors in developing deep-water energy projects.

Qalyubi noted that the Egyptian Zohr gas field — considered the largest gas field in the Mediterranean and discovered in 2015 with reserves estimated at 30 trillion cubic feet — gave Cyprus confidence that Egypt would have the ability to support its fields’ productivity.

Maher Aziz, a member of the World Energy Council, told Al-Monitor that the pipeline between Egypt and Cyprus is another reason for Egypt to be a focal point for energy exchange and trade in the region. Aziz noted that Egypt is seeking to become one of the leading gas exporters to Europe.

The course of talks between Egypt and Cyprus is positive, but it remains a political development in itself, according to Charles Ellinas, CEO of the Cyprus Natural Hydrocarbons Company and energy expert at the Atlantic Council research center.

“In order for such a pipeline to be built, there first must be a valid commercial agreement to sell the Aphrodite gas. … This would require Chevron, Shell and Delek [the companies licensed to exploit the field] to find buyers for this gas in Egypt,” Ellinas told Al-Monitor by email.

Zenonas Tziarras, a researcher focusing on the geopolitics of the eastern Mediterranean at the PRIO Cyprus Center, told Al-Monitor by email that the initial plan was for Egypt to receive Cypriot gas by 2022. However, he said, this goal seems somewhat ambitious at this stage given how the coronavirus pandemic has led to a slowdown in energy markets around the world, and given the important hydrocarbon discoveries in Egypt, which culminated in Egypt’s announcement that it would achieve self-sufficiency in natural gas by the end of 2018. Cypriot gas may not be as important to Egypt as it was before, he said.

Tziarras noted that it is unclear whether the Egyptian liquefied natural gas stations would have sufficient capacity to absorb Cypriot gas given the abundance of Egyptian gas. He said that there are also pending negotiations between Israel and Cyprus on the Aphrodite gas field that must be resolved before Cyprus can liquefy the gas without any problems.

Meanwhile, Cyprus and Israel have been for several years locked in a dispute over gas reserves that extend to the two countries’ maritime borders.

These four experts Al-Monitor spoke with believe that the project of transporting the Aphrodite field gas via a pipeline from Cyprus to Egypt faces two other challenges, one of which is financial, related to the development of the field itself, and the other is political, related to Turkey.

Ellinas believes that with current low global gas prices — hovering around $4/mmBtu in Asia — the Aphrodite field does not look commercially viable for energy companies operating there.

“Energy companies will only invest in Aphrodite when gas sales and high profitability are guaranteed and when prices go higher than $7/mmBtu. … But with the current challenges, conditions do not allow for the development of Aphrodite despite the fact that the Cypriot and Egyptian governments are boosting the project. This will require a fair amount of time and a significant market improvement, and this is somewhat unlikely in the foreseeable future,” he added.

Another challenge facing the Egyptian Cypriot pipeline, Aziz said, concerns Turkey, which argues that proceeds from sales of Cypriot gas should benefit all citizens of Cyprus, including Turkish Cypriots.

The island of Cyprus is divided into two halves. The Greek Cypriot government controls the southern part, which is equivalent to two-thirds of the island’s area. This part enjoys international recognition and is a member of the European Union. The northern Turkish Cyprus has been subject to Turkish control since 1974 and only Turkey recognizes it. Ankara maintains 30,000 soldiers there with a buffer zone separating the two halves.

“Turkey will certainly try to undermine the project and this could inflame the already existing tensions in the region,” Tziarras concluded.