Is new energy league an alliance against Ankara?

A Cairo-based partnership among Egypt, Israel, Cyprus, Greece, Italy, Jordan and the Palestinian Authority is ready to explore energy sources in the eastern Mediterranean — whether Turkey likes it or not. 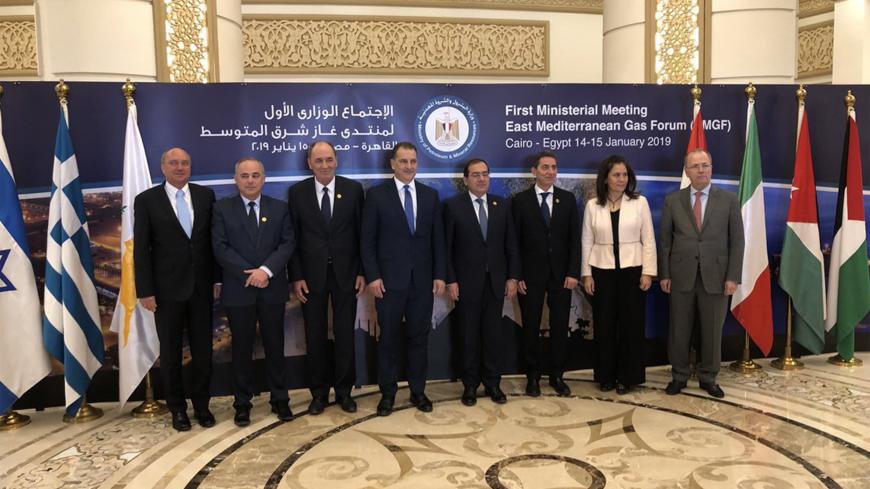 CAIRO — A new eastern Mediterranean alliance that includes Israel is moving to take advantage of the energy-rich region, which has natural gas reserves estimated at 122 trillion cubic feet (3.45 trillion cubic meters). Some observers say the coalition also wants to counter any efforts Turkey might make to control energy sources in the region.

The Egyptian Ministry of Petroleum announced Jan. 14 that six countries and the Palestinian Authority (PA) had agreed to establish the Eastern Mediterranean Gas Forum (EMGF), with Cairo as its headquarters. The presidents of Egypt, Cyprus and Greece had held a trilateral summit Oct. 10 on the Greek island of Crete during which they agreed to establish the forum.

Turkey began its first oil and gas exploration off the coast of Antalya by launching the drilling ship Fatih on Oct. 29.

Speaking at the launch ceremony, Turkish Minister of Energy and Natural Resources Fatih Donmez warned, “Turkish naval forces will take appropriate measures should the vessel be harassed.” He was referring to tensions between Turkey and neighboring Cyprus and Greece over maritime jurisdiction.

Meanwhile, Turkey reportedly is planning a massive military exercise in early March in the Aegean, eastern Mediterranean and Black seas. Some media speculate Turkey is staging the exercise as a message to the EMGF that Ankara won't be intimated or deterred from entering disputed areas to conduct its own exploration.

The EMGF countries include Egypt, Israel, Cyprus, Greece, Italy and Jordan, along with the PA. They are working to create a regional gas market, rationalize the cost of infrastructure and offer competitive prices.

Egyptian Petroleum Ministry spokesman Hamdi Abdelaziz said the forum is part of efforts to transform Cairo into an international energy and business hub, taking advantage of the great volume of natural gas in the eastern Mediterranean Sea.

Abdelaziz told Al-Monitor in a phone interview that Egypt seeks a greater international role by importing gas and re-exporting it to Europe, which can be done by taking advantage of the infrastructure of networks and liquefied natural gas (LNG) plants. He added that after covering the domestic need for gas, Egypt will export the surplus abroad. Cairo also will benefit from revenues from the transport of natural gas to and from Cairo.

Abdelaziz also expects an increase in private-sector investments in LNG in Egypt as a result of cooperation among the forum’s members, in light of Egypt's 2017 law regulating and liberalizing gas market activities.

Egyptian energy expert Ramadan Abu al-Ala said the EMGF is a “regional lobby” to counter any Turkish attempt to disrupt members' exploration in discovery areas in the eastern Mediterranean Sea.

Conflicts are growing there as competition increases to capture oil wealth in a region thought to be rich in natural gas. Turkey is mainly opposed to an agreement signed in 2013 between Egypt and Cyprus for the re-demarcation of the maritime border, under which Cairo discovered the Zohr gas field in 2015. This discovery changed the natural gas map in the eastern Mediterranean Sea, in light of the field’s gas reserves, which are estimated at more than 30 trillion cubic feet.

Egypt rejected Turkey’s opposition to the Cyprus demarcation agreement and deemed the deal to be legal. Meanwhile, tension has been escalating between Turkey and Greece over offshore resources in the eastern Mediterranean Sea.

On Feb. 11, 2018, the Turkish military obstructed a drilling ship contracted by Eni from approaching an area to explore for natural gas. Turkey claimed the ship was heading to the offshore maritime zone that falls into its jurisdiction or that of Turkish-claimed Northern Cyprus.

Gamal al-Qalyubi, a professor of petroleum and energy engineering at the American University of Cairo, said in a televised statement Jan. 15 that the EMGF aims to foil Ankara’s dream of becoming a regional energy source, collecting and re-exporting natural gas via the Trans-Anatolian (TANAP) pipeline from Azerbaijan through Anatolia to Europe. This is in addition to the TurkStream pipeline, which will transport Russian gas through Turkey all the way to Europe's eastern and southern regions. The pipeline is due to be completely operational by the end of this year.

In the meantime, talks about importing gas to Turkey from Israel have been going on for some time, but are likely to be futile. Israeli Energy Minister Yuval Steinitz said Jan. 14 that Israel will start exporting gas to Egypt within a few months. Reuters quoted Steinitz as saying Israeli gas exports to Egypt are expected to reach 7 billion cubic meters (247 million cubic feet) annually over 10 years. He expects Egypt's domestic market to consume half of the exports, with the other half being re-exported as LNG.

Steinitz has noted that Cairo and Tel Aviv are holding talks to build an underwater pipeline to transport gas between the two countries. The construction work is slated to begin next year to move gas from the Leviathan and Tamar fields in Israel to Egypt’s LNG plants for processing and re-exporting.

Egypt also signed an agreement with Cyprus on Sept. 19 to establish a direct maritime pipeline that would transport natural gas from the Cypriot Aphrodite field to Egypt’s liquefaction plants for re-exportation. By 2022, Cyprus is expected to start pumping 700 million cubic feet to Egypt per year.

Qalyubi believes Italy will be the EMGF gate for exporting natural gas, especially for Egypt, since Italy controls the biggest part of the European local network. In another televised statement Jan. 16, he said Italy has a major role to play in the EMGF strategy when it comes to receiving gas, which is to be re-pumped in the European market through its giant network, stretching more than 34,000 kilometers (more than 21,000 miles).

“Egypt has the geographical location and infrastructure to become an open energy market. It is jammed between the EMGF Mediterranean countries and North Africa, which allows it to open an energy market in those countries with ambitious exploration plans,” Qalyubi said.