Turkey announced the launch of an oil-and-gas drilling ship in the eastern Mediterranean amid tensions with several regional countries, including Egypt and Cyprus, over the energy wealth there. 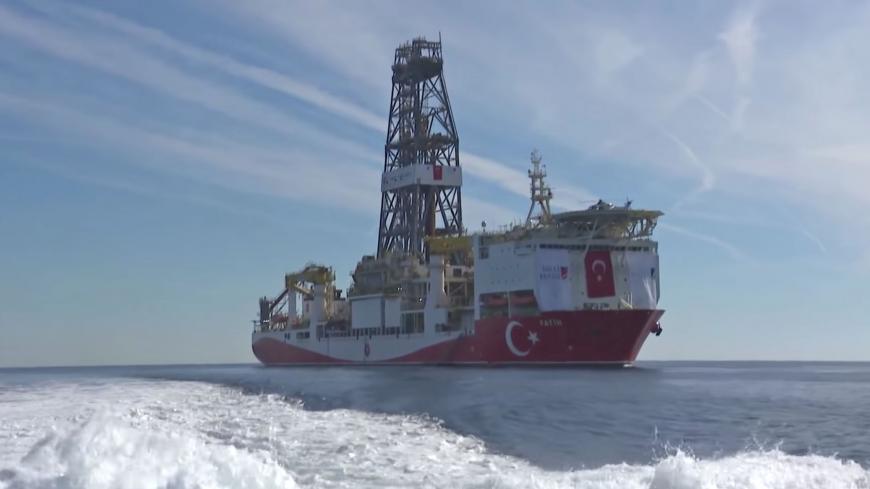 The Turkish oil drilling ship Fatih is seen after launch in a still from a video uploaded Nov. 7, 2018. - YouTube/TRT World

CAIRO — Turkey announced Oct. 30 that it has started drilling for oil and gas in the eastern Mediterranean. Speaking at a ceremony for the launch of the drilling ship, Turkish Minister of Energy and Natural Resources Fatih Donmez announced that Turkish naval forces would take all of the necessary steps should the vessel face any disruption.

This comes against the background of existing tensions in the eastern Mediterranean region between Turkey on the one hand and Egypt, Cyprus and Greece on the other.

Also, Egypt signed an agreement with Cyprus on Sept. 19 to link the Cypriot Aphrodite gas field with Egypt's liquefaction plants for re-exportation as part of Egypt's bid to turn into a regional gas-and-oil hub. The pipeline is to start pumping gas into Egyptian plants by 2022 with a capacity of 700 million cubic feet per year (19.8 million cubic meters).

Of note, Turkish Foreign Minister Mevlut Cavusoglu had announced in a press statement Feb. 4 that the agreement signed in December 2013 between Egypt and Cyprus to define the exclusive economic zones of the two countries was illegal. Cavusoglu claimed the agreement infringes on the Turkish continental shelf. On Feb. 11, Turkey blocked a drill ship chartered by Italian oil company ENI, claiming that certain areas in Cyprus’ offshore maritime zone fall in the jurisdiction of Turkey or that of Turkish Cypriots.

Hamdi Abdelaziz, the spokesman for the Egyptian Ministry of Petroleum, told Al-Monitor, “Egypt is not concerned about Turkey's actions in the eastern Mediterranean because it is working within the framework of the demarcation agreements concluded with Cyprus and Greece and in conformity with international law.”

“Egypt is seeking to turn into a regional source of energy by liquefying and re-exporting eastern Mediterranean gas from Cyprus. The country has made such huge progress that it is difficult for any party to undermine it. Egypt is capable of protecting its gains in the eastern Mediterranean,” he added.

“Also, Egypt is cooperating with international companies such as Italy’s Eni to explore for gas and oil in its economic zone in the eastern Mediterranean, and it will continue to do so,” he continued.

Egypt’s discovery of the Zohr field in 2015 changed the natural gas map in the eastern Mediterranean, as the field’s gas reserves are estimated at 30 trillion cubic feet (850 million cubic meters).

According to press statements by Egyptian Minister of Petroleum Tarek el-Mulla on Jan. 31, the Zohr field provides a gas supply worth $3 billion per year.

Also, Mulla said in a press conference July 5 that Egypt expects to start exporting gas in 2019.

Ibrahim al-Ghitani, a researcher specializing in energy studies, told Al-Monitor, “There is a dispute between Cyprus and Turkey over some areas that fall within the Cypriot economic zone in the Mediterranean. Turkey had previously blocked oil-and-gas drilling operations in some Cypriot areas.”

“Considering the fact that Cyprus could be affected by Turkey's actions and gas exploration bid in the eastern Mediterranean, then Egypt’s plan to build a gas pipeline with Cyprus could also be affected, especially in the event that Turkey blocks the Cypriot production or exploration process. However, Turkey is not likely to directly affect Egypt's exploration in its own economic zone,” Ghitani added.

Ghitani said Turkey is not likely to affect Egypt's success in the eastern Mediterranean as Egypt has already achieved self-sufficiency following its discovery of gas reserves in 2015. Turkey, on the other hand, he said, still has a long way to go before it is able to satisfy its local needs. In other words, it is difficult for Turkey to compete with Egypt to become an energy hub in the eastern Mediterranean. Ghitani said this is especially true considering that Egypt is now in a stronger position following its remarkable cooperation with Cyprus, Greece and even Israel.

Ahmed Refaat, a former president and professor of international law at Beni Suef University, told Al-Monitor that Turkey has not recognized the 2013 agreement between Egypt and Cyprus as a maneuver. Turkey, he added, comes from a weak legal position and does not have the right to excavate in the Cypriot area, let alone disrupt excavation works there because this is contrary to both international law and the UN Convention on the Law of the Sea.

“Egypt would not have made any progress in the field of energy in the Mediterranean had it not been for the border demarcation agreement with Cyprus and Greece. Any Turkish disruption to any exploration works would be tantamount to an act of aggression, and the disrupted states can consequently resort to the International Court of Justice. But should things escalate to this point, Turkey would be the ultimate losing party,” Refaat added.

“After several agreements that are compliant with international law were signed between Egypt and Cyprus, Egypt is required to step in and provide support for Cyprus should Turkey commit any violations against Cyprus. This does not mean an armed conflict must be waged, but there needs to be a legal and political body that acts as a deterrent to Turkey. Competent international bodies are needed in order to settle disputes between the involved states,” Refaat added.