Egypt hopes to boost its natural gas exports at a time when European countries are gradually giving up reliance on Russian hydrocarbons, including gas, in the wake of Russia’s invasion of Ukraine. 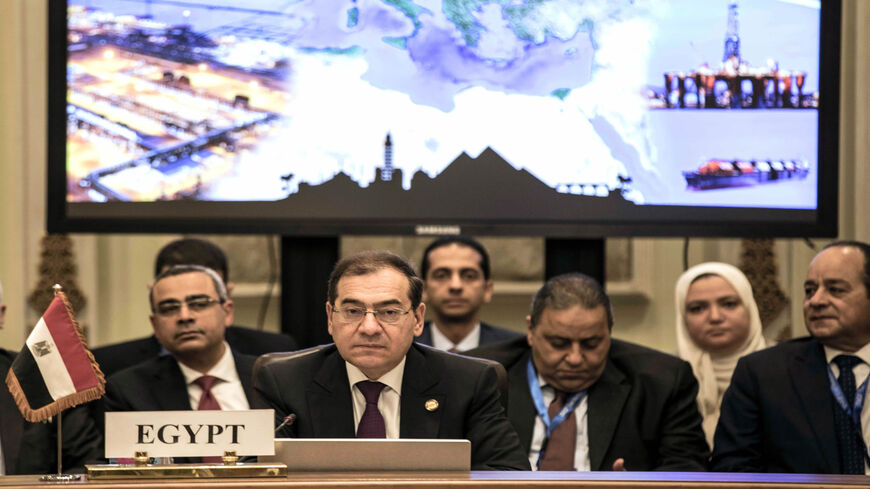 Egypt hopes to boost its natural gas exports at a time when European Union (EU) countries are gradually giving up reliance on Russian hydrocarbons, including gas, in the wake of Russia’s invasion of Ukraine.

The EU obtains around 40% of its natural gas needs from Russia. Amid the absence of an accessible alternative and in case the provision of supplies is obstructed, the EU countries hope to decrease their Russian gas imports by two-thirds in 2022, as part of a plan for independence from Russian fossil fuel by 2027.

The price of natural gas reached a record level in Europe and the United Kingdom recently, amid concerns over supplies following the Russian invasion of Ukraine. Meanwhile, the EU is still studying the possibility of imposing sanctions on the Russian energy sector, in the hope that Moscow will back down.

However, Russian Deputy Prime Minister Alexander Novak threatened in a televised speech March 8 to cut off natural gas supplies to Europe if the West went ahead with imposing a ban on its energy exports.

Russia has so far continued to transport natural gas to Europe via transit pipelines in Ukraine, according to Russia's state-owned Gazprom.

Speaking at the CERAWeek international energy conference held in Houston, Texas, March 10, Mulla noted that Egypt has good infrastructure and a distinguished geographical location, which enables it to provide part of the natural gas needs of Europe and Asia.

On the sidelines of CERAWeek, he discussed with the US and British energy ministers Egypt's efforts in exporting gas, in addition to cooperation opportunities to secure part of the energy supplies to global markets through the East Mediterranean Gas Forum.

Mulla also discussed with Clay Neve, head of Chevron for exploration and production, the company's plans in Egypt in terms of investments and joint cooperation between the two sides in transporting gas from the eastern Mediterranean fields for reexport. The company already manages investments in Egypt worth more than $360 million.

Egypt, in addition to Cyprus, Greece, Israel, Italy, Jordan and the Palestinian territories, formed in January 2019 the East Mediterranean Gas Forum, which later turned into an official, intergovernmental body aimed at creating a regional market for gas, rationalizing the cost of infrastructure and offering competitive prices.

In recent years, Egypt, Cyprus and Greece have demarcated their maritime borders and exclusive economic zones between them to facilitate exploration of gas in the region, which the US Geological Survey estimated in 2017 between 340 trillion and 360 trillion cubic feet, worth between $700 billion and $3 trillion.

Egyptian officials expect that Egypt's natural gas exports will rise to 7.5 million tons by the end of June, as the country seeks to become a regional hub for energy trading. This goal has been reinforced by the stifling energy crisis in Europe and the global shortage of natural gas supplies.

Energy experts who spoke to Al-Monitor believe that the Russian invasion of Ukraine and the EU’s desire to break free from its dependence on Russian gas will revive Egypt's exports of natural gas to the European market.

Egypt’s gas production has been growing steadily since December 2017, with the start of operation of the Zohr gas field, which is the largest gas discovery ever in the Mediterranean, containing an estimated 30 trillion cubic feet of gas, in addition to other discoveries entering the production line. At the time, Egypt had announced that it would achieve self-sufficiency in natural gas by the end of 2018.

Egypt holds 75.5 trillion cubic feet of proven gas reserves as of the end of 2020, according to a report by the London-based British Petroleum, with production capacity of natural gas reaching 58.5 billion cubic meters per annum in 2020, placing Egypt 14th in the world.

Egypt aspires to increase its exports to Europe through the two natural gas liquefaction stations in Idku and Damietta on the northern coast, with an export production capacity of 1.6 billion cubic feet per day.

The function of the two stations is to convert natural gas from its gaseous state to a liquid, so that it can be loaded onto ships and exported, rather than pumping it into pipelines.

He told Al-Monitor, “With as much as 200 billion cubic meters per year to replace — which is the volume of Russia's gas exports to Europe — Egypt will find it very easy to secure more export markets in Europe."

However, Ellinas sees that the constraints will be the limited capacity of the two liquefaction plants at Idku and Damietta, given existing exit obligations to clients in Asia and Turkey.

Egypt's gas exports in 2021 amounted to about 6.5 million tons, worth $3.9 billion. Egyptian exports were concentrated in Asia and Europe, according to government data. European markets received 15% of Egyptian gas exports, distributed to Spain, France and Belgium, while Turkey got 13%. In Asia, India received 22%, followed by Pakistan (17%), China (13%), Bangladesh (9%), Japan (6%) and Kuwait (5%).

Ellinas pointed out that Egypt has a clear opportunity to expand capacity by adding new liquefaction trains to Idku and Damietta. “As most of the required infrastructure already exists, doing this will be cost-efficient and could be done within three years,” he added.

Cyril Widdershoven, a global energy market expert, told Al-Monitor that Egypt can export to all European markets that have access to liquefied natural gas (LNG) regasification plants in place, including Italy, Spain, France and all of northwestern Europe.

The Egyptian government signed agreements with Greece, Israel and Cyprus to pave the way for increasing the volume of gas imports and then reexporting it to Europe after liquefying it at liquefaction stations.

Egypt is also in talks with the EU on increasing natural gas supplies to Europe in the short and medium terms. But it fears that Europe might not have the necessary number of terminals to receive more LNG imports.

“Until 2030-2040, there will be a major gas market existing inside of the EU and United Kingdom. Egypt will be at the top of the list of possible LNG and natural gas exporters to Europe,” Widdershoven said.

The European Commission, the EU's executive arm, is seeking to diversify Europe's energy supply away from Russia and shift more quickly to renewable energy.

However, Widdershoven sees that most new projects in renewables also depend on products that need to be supplied, such as steel and aluminum. Major producers are Russia and Ukraine. Therefore, hiccups in renewables’ expansion are to be expected for sure; keeping gas demand in place, he noted.

Egypt seeks to increase its natural gas exports to compensate for the losses it will incur due to the Russian invasion of Ukraine, most notably the rise of the price of wheat and the damage to the tourism sector, as tourists from the two countries constitute about a third of the total annual number of visitors to Egypt.

Egypt is the largest importer of wheat in the world, and mainly depends on Russia and Ukraine for up to 80% of its imports.

It is expected that Egypt will incur an additional 12 billion to 15 billion Egyptian pounds ($763-$954 million) than what was planned in its budget for the current year, due to the unprecedented rise by 50% in wheat prices in international markets.

Egyptian government spokesman Nader Saad said in a statement at the end of February that the fluctuations in the global energy market and the rise in the price of natural gas provide an opportunity for Egypt to export the largest amount of gas it has in order to take advantage of the price difference to compensate for its purchases of oil and wheat, which were also affected by the situation in Ukraine.

There is sufficient unutilized natural gas in the eastern Mediterranean to increase LNG production by another 10-15 billion cubic meters per year. Most of this can be exported to Europe for as long as needed and then to Asia, Ellinas said.

He added, “As a result of its existing plants, Egypt is not only able to respond to Europe's needs but also has potential to supply competitive LNG to Asia.”

Widdershoven concluded, “Without available additional volumes, exporting to Europe will be a dream only. There needs to be expansion inside of Egypt or in the eastern Mediterranean to support LNG exports to Europe soon.”