Gas flows hit a new record in the first quarter of the year and peaked in March, when Cairo purchased above contractual volumes. 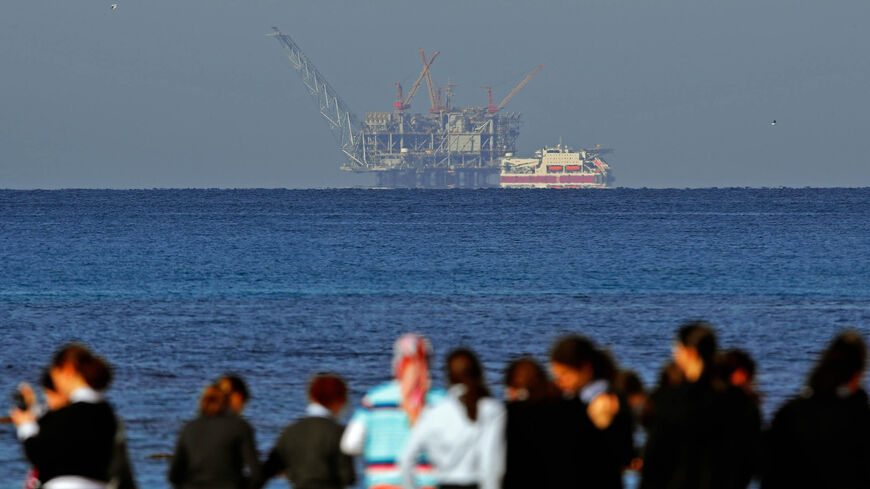 A view of the platform of the Leviathan natural gas field in the Mediterranean Sea is pictured from the northern coastal city of Caesarea, Israel, Dec. 19, 2019. - Jack Guez/AFP via Getty Images

In a further sign of deepening relations in the energy sector, Egypt recorded in March a new record in gas imports from Israel, which in turn boosted their first quarter flows to an all-time high. The record goes in line with Cairo’s efforts to become a regional hub for gas trade as well as Tel Aviv’s plans to take advantage of its thirst for gas to increase exports. But it remains to be seen to what extent the flow can continue to increase rapidly.

The significant increase in Egypt’s gas imports from Israel is primarily the result of the coming into play of the Arab Gas Pipeline (AGP), which connects Egypt with Jordan at the Red Sea and then extends to Syria and Lebanon. Initially built to export Egyptian gas, Cairo is now receiving Israeli gas from this infrastructure, to which Israel has access through a pipeline that connects its own national transmission system to the AGP in northern Jordan.

“That Egypt is taking record volumes of Israeli gas is expected, although the current levels are higher than the contractual volumes. Egypt is looking to maintain LNG [liquefied natural gas] exports, and importing Israeli gas is an important aspect of that,” Peter Stevenson, the Eastern Mediterranean editor at MEES, told Al-Monitor.

Egypt began importing Israeli gas in 2020 following the signing by Egypt’s Dolphinus Holdings two years earlier of two agreements to purchase 64 billon cubic meters of Israeli gas over a decade. One year later, the signatories to the $15 billion agreement amended the deal to increase supply to 85.3 billion cubic meters over a 15-year period. And in 2018, Israel’s Delek Drilling, US-based Noble Energy and Egypt’s East Gas Co. also purchased close to 40% of the shares in the East Mediterranean Gas (EMG) pipeline connecting el-Arish in Egypt and Ashkelon in Israel.

In parallel, Egypt has also been working to become a hub for the commerce of gas in the eastern Mediterranean region. But despite its considerable gas reserves, the country’s plans heavily depend on its ability to increase its gas imports for later reexport, and a key partner in this process is Israel, which has greater capacity to export gas through Egypt.

Both countries’ plans are currently benefiting from the European Union’s efforts to reduce its energy dependence on Russia amid the war in Ukraine, a strategy that inevitably involves seeking alternative gas suppliers. In this context, Brussels has recently resumed plans to negotiate the import of Israeli gas through Egypt, which would process the gas in its LNG facilities so that it can be more easily shipped to Europe, according to Bloomberg.

“For Egypt to become a real, interesting party for the EU, continuous, additional gas will be needed to flow into Egypt, especially during the summer, when local demand is higher. So, the sign that Israel is committed to bring gas, and committed to bring even more, is very significant,” Cyril Widdershoven, a global energy market expert, told Al-Monitor.

Despite its ambition to become a regional gas hub, Egypt’s capacity to significantly and sustainably increase gas exports on its own under current conditions is questionable. The country’s two LNG facilities, on which its greatest export hopes are pinned, were already running at maximum capacity last year, and its high domestic consumption and rapidly dwindling reserves in gas fields, coupled with intermittent outages, also limit its capacity to increase exports. For these reasons, experts in the gas sector insist that Cairo’s options for boosting its gas exports largely depend on increasing gas imports, mainly from Israel, and then reexport it using its own unique infrastructure, including its LNG plants.

Until recently, Egypt was importing Israeli gas from the Leviathan and Tamar gas fields through the EMG pipeline, which has an annual capacity of 7 billion cubic meters. But in the face of increased demand for Israeli gas from Egypt, Israeli oil and gas firm NewMed Energy — formerly Delek Drilling — informed the Tel Aviv stock exchange in March of the start of the piping of natural gas to Egypt via Jordan, marking the first time Israel has exported gas to Egypt using the AGP. Israel approved the start of the gas flow to Egypt via Jordan in February.

“As Egypt moves forward, it will need even more gas from Israel if it is to keep LNG exports going,” Stevenson anticipated. “From July 1, imports from Israel are set to rise to 650 million cubic feet per day from current contractual volumes of 450 million cubic feet per day, although Egypt has been [already] importing more than contractually obligated,” he said. “The reason is that the gas it buys from Israel is much cheaper than current LNG spot prices, so it makes financial sense for Egypt.”

Looking ahead, however, a further increase in Israeli gas imports by Egypt could require more infrastructure to support it. Here, Stevenson noted that negotiations are underway to connect the Israeli Leviathan gas field with the Egyptian LNG plant in Idku, which would allow for further increases in LNG exports. But the expert said that Chevron, the company that operates the Leviathan field, is hesitating for several reasons, including past payment delays by Cairo and fears that Egypt could in the future redirect some of that newly imported gas to its domestic market rather than export it if it faces local shortages.

Stevenson also noted that Israel currently suffers from some bottleneck issues in its own gas network that prevent it from sending its full contractual volumes to Egypt via the EMG. To solve this challenge, Israel has planned the construction of an offshore pipeline stretch connecting Ashdod to Ashkelon to bypass the previous bottleneck. But the expert notes that this infrastructure could be delayed, limiting higher flows to Egypt.

“The pipeline was due to be ready for July 1, when [contractual] volumes were due to increase, but it could be delayed to mid-2023, although INGL, the Israeli gas network operator, says it will be ready by April next year,” Stevenson said.

Widdershoven added that to maintain the upward momentum, Egypt should also increase its gas liquefaction capacity, and Israel should increase its production. “After a couple of years that the Israeli government didn’t want to issue new licenses offshore, there are going to be new ones to produce additional gas. And that will also go into Egypt,” he concluded.

Energean, the owner of the disputed Karish gas field in the eastern Mediterranean, said June 6 that it had moved a floating platform dedicated to the production, storage and offloading of gas in the area. The platform joins those in the Tamar and Leviathan gas fields already operating and supplying the market. Israeli Energy Minister Karine Elharrar said the platform would position the country as a “natural gas power” and allow it to increase exports to Egypt and Jordan, and from there on to additional countries in Europe. The news was criticized in Lebanon, with President Michel Aoun saying, "Any action or activity in the disputed area constitutes a provocation and a hostile act."