An agreement was recently signed allowing the Egyptian Eastern Mediterranean Gas company to use the Eurasia-Israel pipeline, which would allow the resumption of natural gas exports to Egypt. 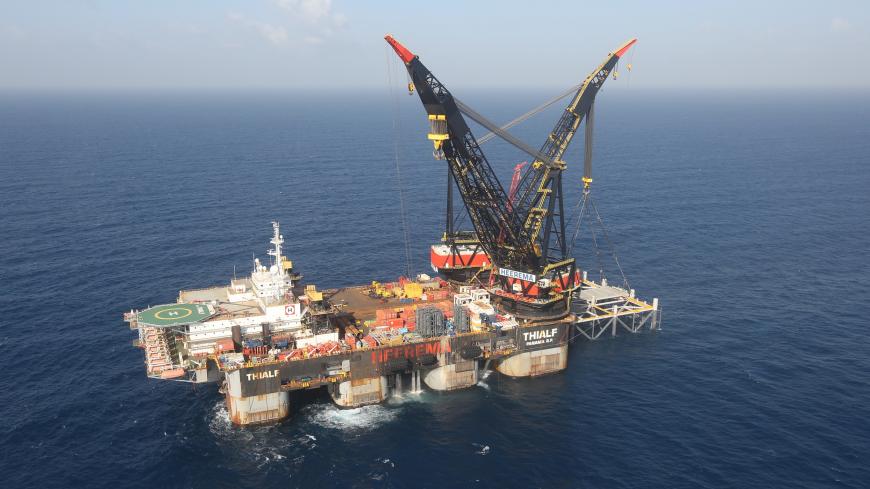 An aerial view shows the newly arrived foundation platform of the Leviathan natural gas field, in the Mediterranean Sea, off the coast of Haifa, Israel, Jan. 31, 2019. - Marc Israel Sellem/Pool via REUTERS

Israel will start exporting natural gas to Egypt after Eastern Mediterranean Gas (EMG) and Israel's Europe Asia Pipeline Co. said on Sept. 8 that they had signed an agreement allowing the former to use a second terminal to export natural gas to Egypt.

According to oil experts and economists, the deal has removed the last obstacle to the start of gas exports from Israel to Egypt. On Feb. 19, 2018, Israel's Delek Drilling company and Texas-based Noble Energy announced the signing of a 10-year contract worth $15 billion with the Egyptian Dolphinus Holdings company to export natural gas to Egypt. The two companies decided in September 2018 to buy stakes in EMG’s pipeline to facilitate the deal.

“Israel was finding a major obstacle in providing an offshore pipeline to supply gas produced from Israeli offshore fields of Tamar and Leviathan to the Egyptian grid. After signing the agreement, EMG’s pipeline would be used to link the Israeli city of Ashkelon to el-Arish in Egypt’s Sinai Peninsula,” Ahmed el-Shami, professor of feasibility studies at Ain Shams University, told Al-Monitor.

Shami said that in spite of the fact the deal is between private companies, the Egyptian government will indirectly benefit from it and the deal will increase state revenues.

The economist explained that Israeli gas is cheap compared to imported liquefied gas, and that alleviates the burden on the Egyptian government in providing gas to the industrial sector as well as helps the government supply national projects already underway with energy and meet local demand.

“The Egyptian government already makes gains indirectly from the private companies that purchase gas — whether it is from Israel or any other country. That is because the government collects fees in return for using the national network of gases and incomes of using Egyptian liquefaction stations,” he added.

Shami also said that what is most important is the fact that the agreement supports Egypt’s strategy to become a regional center for the gas industry and gas exports to the world. “Egypt will use Israeli gas and treat it in its liquefaction stations for re-export to Europe. That would be a game-changer for Egypt,” he said.

Tharwat Ragheb, professor of petroleum and energy engineering at the British University in Cairo, also said that the agreement was very beneficial for Egypt, as it has helped to settle an international arbitration case against Egypt as a result of halting gas exports to Israel in 2012.

In light of the decision of the International Criminal Court on Dec. 4, 2015, against the Egyptian General Petroleum Corporation and Egyptian Natural Gas Holding Company (EGAS), the Israel Electricity Authority was entitled to receive damages estimated at $1.7 billion in addition to the amount of interest, as Egypt has stopped gas exports to Israel due to unrest following the January 25 Revolution in 2011, according to the Ministry of Petroleum. Egypt signed a deal with Israel in 2005 in which it agreed to sell $2.5 billion worth of gas to Israel.

Ragheb said that the General Petroleum Corporation and EGAS reached a “friendly agreement” to resolve the dispute with Israel, and the two Egyptian entities managed to settle and reduce the amount of the ruling issued in favor of the Israel Electricity Authority to an amount of $500 million.

“That was a remarkable achievement. Egypt used that agreement as a pressuring card in order to get a settlement of its gas dispute with Israel,” he told Al-Monitor.

Ragheb added that Egypt’s gas agreement with Israel also goes in line with the country’s plan to be a gas exporter to Europe, which seeks to wean off Russian oil.

“Although the agreement stirs public confusion and worry on the backdrop of historical conflict with Israel, boosting gas cooperation with Israel will be of great benefit to Egypt at the local and regional levels,” he added.

Since 2014, Egypt has been ramping up its efforts in order to put an end to energy shortages and become an oil and gas exporter again after it turned into an importer following the January 25 Revolution.

The statement also highlighted that Egypt achieved self-sufficiency in locally produced natural gas by the end of September last year due to a gradual increase in domestic gas production as a result of the completion and development of new phases of four major fields in the Mediterranean Sea.

“This has rationalized the use of foreign exchange directed at imports and reducing the import bill which is a burden on the state budget,” the statement added.

The ministry also said that a total of 31 projects in this field have been implemented over the past five years with investments worth $21.4 billion and a total production rate of 6.9 billion cubic feet of gas.