Israel to begin exporting gas to Egypt next month

In just a few weeks, Egypt should be receiving natural gas from Israel's Leviathan field. 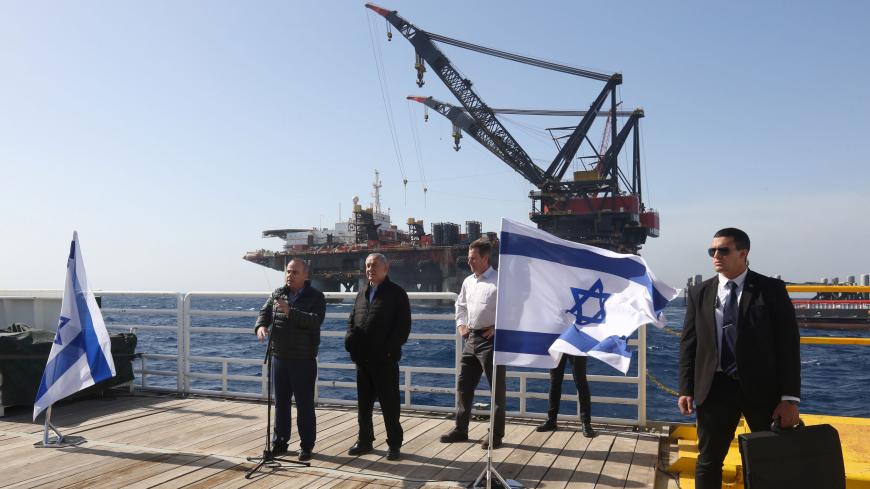 Israeli Prime Minister Benjamin Netanyahu and Energy Minister Yuval Steinitz speak during the inauguration event of the newly arrived foundation platform of the Leviathan natural gas field, in the Mediterranean Sea, off the coast of Haifa, Israel, Jan. 31, 2019. - Marc Israel Sellem/Pool via REUTERS

CAIRO — Egypt will soon start working off a debt to Israel by importing Israeli natural gas.

Egypt had faced a $1.76 billion settlement awarded to state-owned Israel Electric Corporation (IEC) in 2015 because Egyptian companies for years had been unable to fulfill a long-term contract to supply IEC with natural gas at a fixed rate. To reduce that settlement to $500 million, Egypt is reversing the flow, so to speak, and will buy gas from Israel.

Texas-based Noble Energy, which operates Israel’s largest offshore natural gas field, Leviathan, will start supplying the local Israeli market by the end of December. "In the weeks right after that, we will export to Egypt and Jordan," Binyamin Zomer, Noble Energy’s vice president for regional affairs, said Dec. 2 at Israel's annual Energy and Business Convention in Ramat Gan.

Noble Energy and Delek Drilling are substantial partners in the operation of Israel’s Leviathan and Tamar offshore fields in the Mediterranean. The two companies had agreed to sell $15 billion worth of gas to a customer in Egypt — Dolphinus Holdings — but in October, the deal was amended to increase supply by 34% to about 85 billion cubic meters (3 trillion cubic feet), or about $20 billion.

Praising the supply deal, Ministry of Petroleum Spokesman Hamdi Abdel Aziz said, “The new amendments also increased the gas quantities from the Leviathan field to 60 bcm, while shrinking those from Tamar field to 25 bcm from 32 bcm, during a period of 15 years instead of 10.”

Egypt only recently was able to work out an arrangement to adjust the amount of money it owed IEC. In 2005, Egypt had signed a 15- to 20-year contract to sell gas to Israel at a fixed price but “after the January 2011 Revolution and the state of insecurity prevailing over the country, Egypt found itself unable to fulfill its commitment to supply gas to IEC," Abdel Aziz told Al-Monitor. In addition to the general instability in the country, Egypt's gas pipeline to Israel was hit by dozens of explosions. In 2015, IEC claimed Egyptian natural gas companies were obligated under an arbitration award issued by the International Chamber of Commerce to pay it $1.76 billion in compensation for halting gas supplies in 2012.

In June of this year, Egyptian General Petroleum Corporation and Egyptian Natural Gas Holding Company signed an agreement with IEC.

“Egypt agreed to import gas from Israel in exchange for Israel reducing the compensation amount due by approximately $1.3 billion,” Ayman Samir, an international relations researcher at Al-Ahram newspaper, told Al-Monitor.

In addition to settling the debt, Egypt will be able to export the gas it imports to other countries after its liquefaction at stations in northern Cairo, Samir said.

He affirmed that Egypt plans to become a regional energy hub, especially after developing production from the Zohr field in the Mediterranean. He added, however, "The Zohr field will not allow [for] dispensing with Israeli gas imports in the coming years, to meet the needs of the local market and power stations.”