Now that Cyprus, Greece and Israel have agreed to build a subsea pipeline to supply Europe with natural gas, officials are downplaying its potential impact on Egypt's ambition to become a regional energy hub. 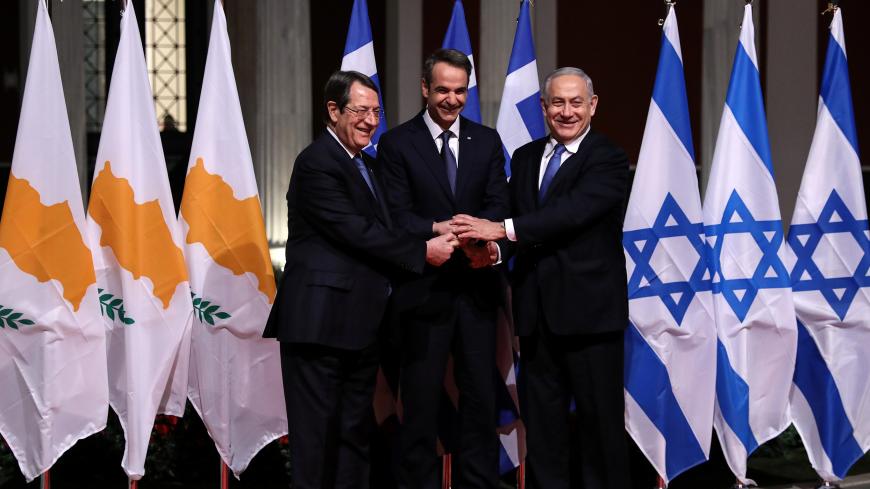 CAIRO — The East Mediterranean pipeline agreement signed by Cyprus, Greece and Israel Jan. 3 in Athens to supply Europe with natural gas has raised questions about its potential impact on Egypt. The project comes at a time when Egypt is striving to become a regional hub for the trade and distribution of liquified natural gas to Europe and Turkey is working to extend its control over energy resources in the Mediterranean through the drilling for gas off the coast of Cyprus.

The future EastMed subsea pipeline is planned to extend over 1,872 kilometers (1,163 miles) and promises to transport 9-11 billion cubic meters of gas annually from the marine reserves of the Eastern Mediterranean Basin off Cyprus and Israel to Greece, as well as to Italy and other countries in southeastern Europe.

Egypt has a strategic location and energy infrastructure with two gas liquefaction stations in Idku and Damietta, from which it exports gas shipments to global markets. A series of gas fields have been discovered in the area during the past few years to supplement gas imported from the fields of Cyprus and Israel.

The largest is the Zohr field discovered in the Mediterranean in August 2015. The field’s reserves were estimated at 30 trillion cubic feet and its production stood at 2.7 billion cubic feet per day at the end of 2019. Zohr brought Egypt back to the export market.

In a telephone conversation with Al-Monitor, member of the World Energy Council Maher Aziz denied that the EastMed gas pipeline will have any impact on Egypt as a focal point for energy trade and exchange in the region. “It is normal for the gas line to extend from Israeli fields to Cyprus and from there to Europe,” he added. “It is not unlikely that an agreement will be reached during the next meeting of the Eastern Mediterranean Gas Forum to extend another line from Egypt connected to the EastMed line.”

On July 25, 2019, Egypt created the East Mediterranean Gas Forum with the participation of seven countries: Egypt, Jordan, Cyprus, Greece, Italy, Israel and Palestine. The forum aims to create a regional gas market that serves the interests of its members by managing supply and demand. Gas reserves in the region are estimated at 122 trillion cubic feet.

Aziz continued, “Egypt already has an agreement with Cyprus to construct a pipeline. This means Egypt can reach Europe, especially since it has a surplus of natural gas that Europe, thirsty for energy, needs. It is normal for it to get its gas needs from Israel and Egypt.”

“The seven countries of the Eastern Mediterranean Gas Forum share a vision of regional integration,” Aziz said. “This supports cooperation between them and not competition.”

Former Egyptian Minister of Petroleum Osama Kamal argued in a phone call during the “Cairo Now” TV show Jan. 7 that the EastMed line will not affect the deal between Egypt and Israel under which the latter exports to Egypt gas from its marine reserves.

Israel is expected to start exporting natural gas to Egypt soon, according to a $15 billion deal over 10 years signed in 2018 by US-based Noble Energy and the Israeli Delek Drilling to export up to 64 billion cubic meters of natural gas from the Tamar and Leviathan fields in Israeli territorial water to Egypt’s Dolphinus Holding.

Egypt announced in 2018 that it had achieved self-sufficiency in natural gas. This means the gas imported from Israel and Cyprus will be allocated for exportation to global markets.

In a Jan. 3 interview with New Europe, Israeli Energy Minister Yuval Steinitz affirmed that Israel and Cyprus need the EastMed natural gas pipeline. “We have enough gas in Israel and Cyprus to justify even two pipelines so certainly we have enough gas for one pipeline.” He asserted that his country intends to export some gas to Egypt via the Egyptian liquified natural gas terminals and send it to Europe.

Ramadan Abul Ela, a petroleum engineering professor and vice president of Alexandria's Pharos University, said the EastMed line will never be implemented due to its planned length, its passage in deep waters and its enormous cost of $7 billion. He explained to Al-Monitor that this pipeline has been under consideration since 2015.

Abul Ela added, “Talking again about the construction of this subsea line now is an attempt to send a message to Egypt that there is an alternative for it to supply gas to Europe to keep it from setting future conditions on the passage of gas through its territories.” He noted, however, “Assuming the EastMed pipeline was constructed, it would not affect Egypt.”