Does Egypt really have gas self-sufficiency?

Despite the frequent announcements by Egyptian Minister of Petroleum and Mineral Resources Tarek el-Mulla of achieving self-sufficiency in natural gas and halting imports, in addition to the completion of the phases of operation of Zohr field, Cairo's continued import of Israeli gas stirred confusion. 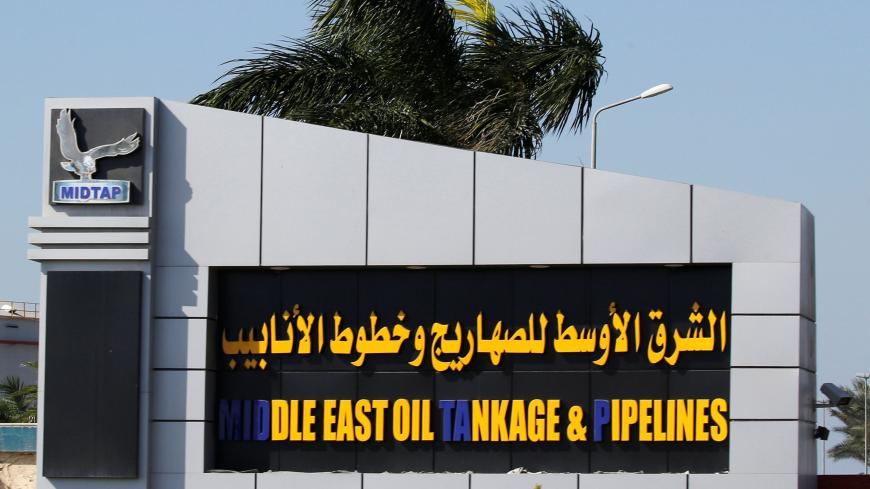 The entrance of Middle East Oil Tankage and Pipelines is seen at the highway of Alexandria, Egypt, Nov. 7, 2018. - REUTERS/Amr Abdallah Dalsh

CAIRO — Egyptian Minister of Petroleum and Mineral Resources Tarek el-Mulla announced that Egypt achieved its highest rate of crude oil and gas production in August. Domestic production scored 1.9 million barrels of oil equivalent per day, while the investment rate in the sector climaxed to $30 billion.

At the inauguration speech of the 10th Mediterranean Offshore Conference and Exhibition in Alexandria — delivered on his behalf Oct. 15 by Mohamed Safan, first undersecretary of the Ministry of Petroleum for Petroleum Affairs — Mulla said Egypt achieved natural gas self-sufficiency in September.

However, more than a year ago, Mulla had said Egypt would stop importing liquefied natural gas (LNG) in October 2018. In an interview on Aug. 15, 2018, with the Egyptian newspaper Al-Watan, Mulla had said, “September [2018] will see Egypt’s last gas shipments from suppliers abroad. We have been importing eight shipments and then we reduced them to seven. In September we will only import three shipments, which will be the last imported shipments. This means that as of Oct. 1 [2018] Egypt will completely stop imports, and this will be the beginning of gas self-sufficiency. We will start exporting surplus as of January 2019.”

In tandem with the completion of operation phases at Egypt’s Zohr field, which began actual production in mid-December 2017, and despite Mulla’s repeated announcement of achieving LNG self-sufficiency, Reuters reported Oct. 2 that Israeli energy companies are planning to increase their natural gas imports to Egypt.

“Israel will significantly increase the amount of natural gas it plans to export to Egypt under a landmark deal,” Reuters said, quoting Israeli energy companies. “Under the amended agreement, the companies said the amount to be sold from the Leviathan field will nearly double to 60 billion cubic meters of gas over 15 years."

The news about these deals with Israel in light of new petroleum discoveries in Egypt, in particular at the Zohr field, stirred controversy.

On Jan. 31, 2018, Egyptian President Abdel Fattah al-Sisi inaugurated the first stage of Zohr gas field. Italian energy company Eni discovered the field in August 2015. “Zohr is the largest gas discovery ever made in Egypt and in the Mediterranean Sea and could become one of the world’s largest natural gas finds,” the company said.

Gas reserves in the 100-square-kilometer (39-square-mile) field are estimated to be about 30 trillion cubic feet, or 5.5 billion barrels of oil equivalent," Mulla said during the inauguration ceremony that was broadcast live on Egyptian TV channels.

Actual production began at Zohr in December 2017, according to a Ministry of Petroleum statement.

In his interview with Al-Watan, Mulla had justified the continued import of gas from Israeli companies. He argued that gas imported from Israel would allow Egypt to quickly turn into a regional energy export hub. “Israel needs to market its gas. For Israel, Egypt has a special location in a competitive region. [Egyptian] private companies will import Israeli gas instead of [this gas] being sent to European countries and this gas will be liquefied in Egyptian plants. Egypt would reap an economic revenue from [this] gas’ liquefaction, export, storage and transportation inside national networks.”

Egypt has two LNG terminals, overlooking the Mediterranean Sea. The first is Idku in Beheira governorate, which is owned by the state-owned Egyptian LNG Company (ELNG). It has two LNG production trains and was inaugurated in 2000 under a contract for 50 years and operating under the free zone system.

The other terminal, SEGAS Liquefied Natural Gas Complex, located in Damietta, 60 kilometers (37 miles) east of Port Said, was also inaugurated in 2000, with only one production train. The terminal is controlled by the Spanish Union Fenosa Gas and ENI of Italy. It started operation in 2003.

These two terminals convert natural gas from its gaseous state to the liquid state, to be loaded onto ships and exported, rather than being pumped into pipes.

As a result of the shortage of gas supply in Egypt since 2012, due to the foreign investors’ fear in developing local gas fields, Damietta plant stopped working.

Egypt hopes to become a regional hub for exporting gas to the world, by exploiting the advantage it has over other countries of the Eastern Mediterranean, i.e., its gas liquefaction terminals.

Former Minister of Petroleum Osama Kamal explained that achieving gas self-sufficiency does not mean that Egypt will not need to import gas from Cyprus or Israel. He told Al-Monitor, “Restarting Egyptian liquefaction terminals, settling international arbitration cases and turning Egypt into a regional energy center, in addition to the cheap Israeli gas compared to liquefied gas, are the main reasons behind the recent deal to import Israeli gas.”

Kamal believes the Israeli or Cypriot gas supply to Egypt has nothing to do with achieving self-sufficiency in gas. “Negotiations with Israeli or Cypriot parties are aimed at recommissioning the Egyptian liquefaction terminals that have been suspended as a result of insufficient Egyptian gas for export,” he noted.

He added, “This deal is based on commercial considerations. Israel says it will profit a lot from this deal.”

Medhat Youssef, petroleum expert and former vice president of the Egyptian General Petroleum Corporation, told Al-Monitor that importing gas from Israeli fields will help achieve Egypt's goal of becoming a regional energy hub. “Importing gas from Israel will not entail any obligation on the Egyptian state. This import will take place through the private sector,” he said.