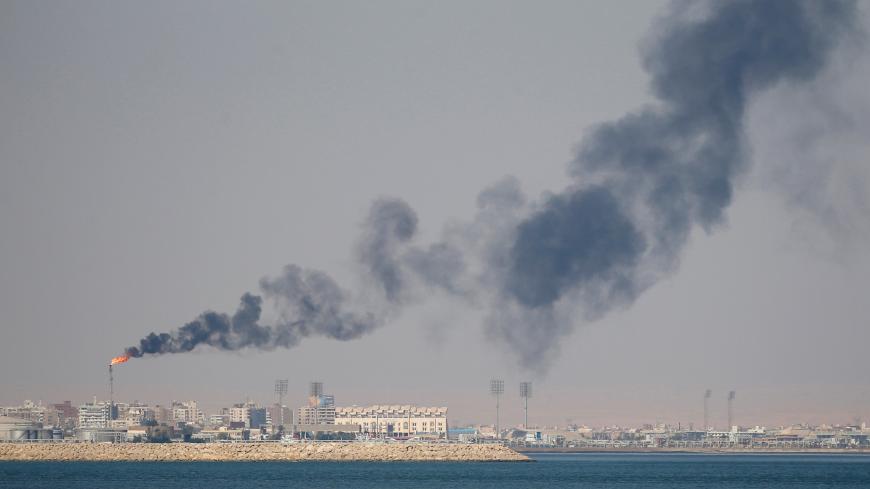 Black smoke rises from a petroleum and gas company near the Gulf of Suez, north of Cairo, Egypt, Aug. 17, 2016. - REUTERS/Amr Abdallah Dalsh

The signing of a $15 billion deal allowing an Egyptian private sector firm to buy natural gas from Israel over the coming decade has sparked widespread controversy on social media despite garnering enthusiastic praise from officials in both countries.

Under the deal — hailed as "historic" by Israeli Prime Minister Benjamin Netanyahu — the Egyptian company Dolphinus Holdings would import around 64 billion cubic meters of gas over a 10-year period (starting at the end of next year) from Israeli drilling company Delek and its US partner Noble Energy, a move that Netanyahu said would strengthen Israel's security, economy and regional relations.

Egyptian President Abdel Fattah al-Sisi has also lauded the deal as "a victory,” saying it would "help transform Egypt into a regional energy hub."

"We have scored a goal," Sisi told Egyptians in televised comments on Feb. 21. He was keen to indicate, however, that "the government was not directly involved in the gas import agreement.”

Sisi's enthusiasm has failed to rub off on a skeptical Egyptian public, as many Egyptians reacted to the news with shock and outrage. Activists took to social media to question the motives behind the agreement, asking why there was a need to import gas when the country had only a few weeks earlier inaugurated the gigantic Zohr offshore gas field. Petroleum Minister Tariq al-Mulla had recently pledged that the field, off Egypt's northern coast, would help the country achieve “self-sufficiency in natural gas, ease the burden on the state budget and cut the imports bill."

"I am deeply saddened to hear about the gas import deal from Israel. Aren't our people entitled to an explanation of why such a deal was concluded at a time when the official reports themselves indicate that Egypt is about to become self-sufficient in gas? Stop disrespecting the minds of Egyptians," tweeted Hassan Nafaa, a professor of economics and political science at Cairo University.

Energy analysts expect production from the Zohr field to meet the bulk of local demand and restore Egypt as a gas supplier for the East Mediterranean region. They say the significant gas find signals a reversal of a trend started after the 2011 uprising, when Egypt had shifted from net exporter to net importer after multiple militant attacks had sabotaged the country's main pipeline in the Sinai Peninsula, disrupting gas shipments to Jordan and Israel.

News of the multibillion-dollar gas import deal has dampened Egyptians' high ambitions. Disappointment and bewilderment have now replaced the optimism spurred by the opening of Zohr.

"Just three weeks ago, we were celebrating the opening of the Zohr gas field and had rejoiced at the prospect of achieving energy self-sufficiency — and now this, " Mohamed Badrawy, the head of the parliamentary bloc of the Egyptian National Movement, said in a telephone interview broadcast on the privately owned CBC Channel on Feb. 19.

He expressed indignation that under a new law allowing private companies to import gas, the first deal would, in fact, be sealed with Israel, long considered by Egyptians to be "an enemy state.”

"Do we even know who our friends and who our enemies are anymore? At a time when Egyptians are struggling because of the ailing economy and the country is facing a foreign currency shortage, is it acceptable for Egypt to pay $15 billion to Israel?" he retorted.

Badrawy added that the Egyptian parliament would demand an explanation from Mulla regarding the recent deal.

In an earlier phone interview broadcast on the same channel, Mulla said, "The government has yet to approve the proposed deal." He added that achieving self-sufficiency in gas should not prevent Egypt from importing gas from other countries in the East Mediterranean area like Cyprus and Israel.

"The imported gas may be used for local consumption or re-exported to Europe through our LNG facilities," he noted, cautioning that "all arbitration cases must be settled before Egypt can move forward to become a regional energy hub."

Israel resorted to international arbitration after Egypt canceled a controversial 2005 contract under which it had supplied Israel with 40% of its natural gas. The deal, widely unpopular with Egyptians, was scrapped in 2012, halting gas supplies to Israel over what Egyptian officials said were "disputes over payments." Egyptians had opposed the deal largely because it had allowed Israel to buy the gas at below-market rates, resulting in multimillion-dollar losses for Egypt. The majority of Egyptians have for decades harbored animosity toward their northern neighbor, owing to widespread support for Palestinians in Egypt and a deep-rooted rejection of the Israeli occupation of Palestinian territories.

In mid-2012, former President Hosni Mubarak, then-Oil Minister Sameh Fahmy and other businessmen involved in the 2005 deal faced prosecution on charges of corruption and squandering public funds over the 2005 20-year agreement, deemed "harmful to national interests" by the court that ruled in the case. They were convicted and handed down sentences of up to 15 years before being acquitted of the charges in February 2015.

A Swiss Court has ordered Egypt to pay $2 billion in compensation to East Mediterranean Gas (EMG), the company that operated the pipeline that had delivered the gas to Israel under the now-defunct agreement. In recent days, another arbitrator — the Cairo-based Regional Center for International Commercial Arbitration — also decided that Egypt must pay EMG $1.033 billion plus interest to compensate for the company's losses.

If and when the Egyptian authorities give the green light for the new gas import deal, Egypt would be turning the page on old disputes, thus ushering in a new phase in its relations with Israel. Analysts say the agreement will boost economic and diplomatic ties between Egypt and its northern neighbor, bringing them on par with security relations that analysts have described as currently being "at their best."

The deal would also pave the way for other agreements that observers believe would "propel Egypt toward realizing its ambitions of becoming a regional energy production hub." Already there is talk of another import deal being finalized with Cyprus, the details of which have yet to be revealed. This second prospective deal would involve shipments from Cyprus' Aphrodite field — which contains an estimated 4.5 trillion cubic feet of gas — to Egypt's liquefied natural gas plants, according to Bloomberg.

With the country's own vast gas reserves and the prospective shipments from Cyprus and Israel, Egypt's petroleum minister is confident that the country is well on its way to achieving gas self-sufficiency by the year's end and can expect "a surplus by next year." Thanks to the potential deals with Israel and Cyprus, the country's two liquefaction facilities — which have remained idle since the uprising seven years ago — will soon be up and running again, processing the imported gas for re-export to European markets.

While it was only a few short years ago that Egypt faced its "worst energy crisis in decades," the dark memories of the 2012-2014 frequent power outages and severe shortages in gas supplies are now fading and may soon be entirely forgotten. Meanwhile, the Egyptian government faces the daunting task of convincing a wary public of the benefits of the new deals.