Is Egypt trying to provoke Turkey in eastern Mediterranean?

Although Egypt has stopped liquefying and exporting liquefied natural gas due to the global collapse of prices as a result of the coronavirus pandemic, it is still expanding its gas production in the eastern Mediterranean. 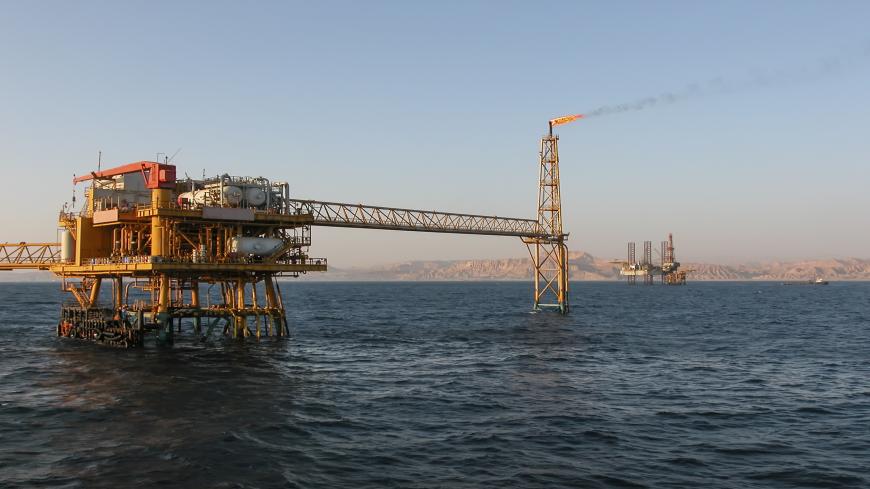 CAIRO — In conjunction with a report published April 30 by the France-based International Group of Liquefied Natural Gas Importers that stated that Egypt's exports from liquefied natural gas increased by 150% in 2019, Egypt said it was ready to expand the production of natural gas from the eastern Mediterranean, which are the stage of political disputes between Cairo and Ankara.

However, Egypt seems desperate to achieve another increase of its liquefied natural gas exports, in light of the rapid spread of the virus that causes COVID-19.

Ahmed Abbas, economic researcher at the Istanbul-based Egyptian Institute for Studies, told Al-Monitor that halting production from new wells to reduce expenses in light of the country's economic crisis caused by the pandemic was a logical step, especially since Egypt had suspended liquefying and exporting natural gas.

The Egyptian Natural Gas Holding Company (EGAS), representing the Egyptian Ministry of Petroleum, announced in an official statement April 27 the failure of a settlement agreement to re-operate the Damietta liquefaction station with Italian-Spanish company Union Fenosa Gas, the foreign partner (with 80% shares) of the Egyptian government in the station.

In 2013, operations were suspended at the Damietta station due to the Egyptian government’s inability to cover its shares of the partnership dues. A settlement agreement to re-operate the station faltered in April because EGAS could not meet some of the conditions stated in the agreement, including paying some dues, due to the coronavirus outbreak, as per the statement of the Ministry of Petroleum and EGAS.

On April 21, newspapers close to the Egyptian state quoted anonymous sources as saying that Shell company — which has the largest share (36%) in the Idku station complex for liquefaction — suspended in March exports of liquefied gas shipments to its contractors due to the low global price and drop in demand resulting from the pandemic. The US gas price dropped to $1.63 per million British thermal units, which is the lowest average gas price in 10 years.

An informed source in the Ministry of Petroleum told Al-Monitor on condition of anonymity that the failure to re-operate the Damietta liquefaction station and the halting of the export of liquefied gas from the Idku complex due to the low global price are two temporary measures or conditions related to the global markets’ failure due to the virus outbreak.

He pointed out that this should not affect production rates from the fields discovered in Egypt, “because Egypt will resume liquefaction and exports when markets stabilize sooner or later.”

The source added that the production operations from the fields have their accounts independent of the liquefaction and export operations. He noted that stopping production or not expanding it in the exploration areas will incur many losses for the state and its foreign partners, “because the state and companies will bear the wages of workers in exploration areas and maintenance of the equipment in the absence of production.”

However, Abbas believes that Egypt is expanding production in the Zohr field and the eastern Mediterranean region to provoke Turkey, especially since the Shorouk area, which houses the Zohr field, is located on the Egyptian-Cypriot maritime borders that Turkey does not recognize. He added, “Egypt ignored the rights of the Turkey-backed Republic of Northern Cyprus, and perhaps Turkey's own rights in areas that Egypt considered purely Cypriot areas.”

The Cypriot government condemned in an official statement April 21 Turkey’s activity in the Cypriot waters, after Turkey sent a surveying ship for gas exploration and drilling. Turkey also announced in early April its implementation of maritime military exercises on virtual targets in the Mediterranean.

Shaker Mustafa, international relations’ researcher at the Arab Center for Research and Studies, believes that Egypt's increase of natural gas discovery in the eastern Mediterranean, even in light of the economic recession and the disruption of liquefaction and export agreements, may actually aim to enhance the influence of Egypt in the eastern Mediterranean to rival the Turkish influence and protect Egyptian rights.

Esra Elonu, a Turkish journalist close to the Turkish regime, had claimed in a tweet — which she later deleted — that the protests that broke out against Egyptian President Abdel Fattah al-Sisi in September 2019 can stop if Sisi would accept to negotiate with Turkish President Recep Tayyip Erdogan on eastern Mediterranean gas. Yassin Aktai, one of Erdogan's key advisers, retweeted the post, which many Egyptian newspapers and observers considered evidence that Turkey was supporting and inciting Egyptian leaders and those who called for the protests against Sisi, most notably Egyptian actor and contractor Mohamed Ali.

Mustafa added that Turkey was perhaps hoping to enter the Cypriot waters if the international community recognized its ally, Turkish Cyprus, and its rights to Cypriot waters. However, “These hopes were diminished due to the Egypt-Cyprus agreement to share hydrocarbon reserves. The agreement can be binding for Turkish Cyprus, even if it becomes internationally recognized,” he said.

In December 2014, Turkish Minister of Foreign Affairs Mevlut Cavusoglu commented on the agreements between Greece, Egypt and Cyprus regarding the investment of the Mediterranean's wealth, saying that any agreements concluded between the Mediterranean countries without Turkey will not be recognized by his country. He added, “It indicates bad faith from those countries and that would increase tensions in the region.”

Turkish Prime Minister Ahmet Davutoglu pledged in the same month that Ankara would not allow Greek Cypriots to excavate natural resources in the Turkish Cypriot waters and monopolize those resources for themselves. He said, “The Mediterranean is our sea too and no one can close it in our face.”

Rashad Abdo, economist and head of the Egyptian Forum for Economic and Strategic Studies, told Al-Monitor that the expansion of gas exploration in the eastern Mediterranean may not be due to any political factors, rather economic ones.

He said, “The decision to expand exploration and production depends on the willingness of the Egyptian government, in partnership with foreign companies such as Eni and BP. Liquefaction and export operations depend on the same factor, but in partnership with foreign partners such as Shell. For that reason, perhaps some partners support production expansion while others believe liquefaction and exports should stop.”