Turkey’s launch of a second ship to drill in disputed areas off Cyprus is the harbinger of further escalation in the eastern Mediterranean and tough choices for Ankara. 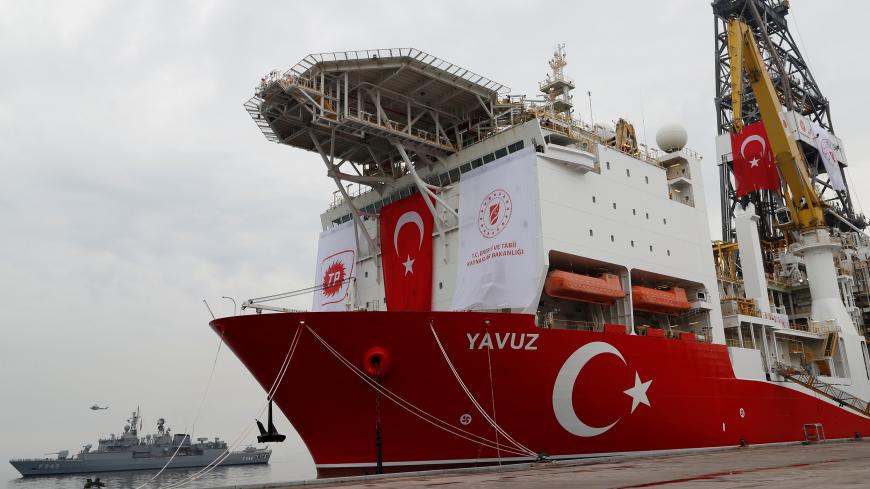 Turkey’s dispatch of a second drillship to disputed waters off Cyprus has raised the specter of renewed tensions in the eastern Mediterranean. Yet Ankara finds itself increasingly isolated in the region's gas rivalry, facing a critical choice between military escalation or a diplomatic push to gain allies.

The Yavuz drilling ship, which Turkey’s state-owned petroleum company bought for $262 million in October, was launched to sea in a grand ceremony June 20 at Dilovasi, not far from Istanbul, after nearly two months of maintenance work and training for the crew.

The Yavuz, en route to the eastern Mediterranean via the Aegean Sea, is expected to reach the Bay of Famagusta on the eastern side of Cyprus the second week of July and start exploratory drills in an offshore zone known as Karpas-1, to the south of the Karpas Peninsula. The vessel will reach a drilling depth of more than 3,000 meters, Turkish Energy Minister Fatih Donmez said at the ceremony.

Manned by a 150-strong crew, half of them foreign nationals, the ship aims to advance to farther locations in follow-up drilling missions. A major objective of the expedition, planned to last about four months, is to increase the deep-sea drilling expertise of Turkish engineers onboard. The Yavuz will reportedly sail on to the south of Cyprus in late August for exploratory drilling in an area where Turkey’s seismic research vessel Barbaros Hayreddin is already present.

In sum, while the Fatih drillship is already active to the west of the island in areas close to Blocks 1 and 6, claimed by the Greek Cypriots, under the protection of two Turkish military frigates and three gunboats, the Yavuz will explore the south of the island, close to Blocks 2, 3 and 9, where the Greek Cypriots have awarded exploration rights to Italy’s Eni, again escorted by a Turkish military frigate, according to the Turkish Defense Ministry.

In February 2018, Turkish military vessels stopped a drillship operated by Eni from accessing Block 3, which overlaps with Area F, where the Turkish Cypriots have granted a license to Turkey’s main exploration company, TPAO, on the grounds that live-fire exercises were underway in the area. Now, with the Yavuz also heading to the region, tensions in the eastern Mediterranean appear poised to escalate further in mid-July.

As Al-Monitor pointed out back in March 2018, the eastern Mediterranean is increasingly resembling the disputed South China Sea, growing into a major flashpoint in the Middle East amid rivalries over hydrocarbon reserves, military exercises, the ongoing civil war in Syria and refugee flows.

The eastern Mediterranean is increasingly resembling the disputed South China Sea, growing into a major flashpoint in the Middle East amid rivalries over hydrocarbon reserves, military exercises, the ongoing civil war in Syria and refugee flows.

Over the past six months, the Greek Cypriots and Greece have stepped up efforts to isolate Turkey in the eastern Mediterranean. Earlier this month, the Greek Cypriot authorities issued arrest warrants for the Fatih’s foreign crewmen, including engineers and technicians from Britain, Croatia, Russia, Serbia and Ukraine, over their involvement in a venture in waters the Greek Cypriots unilaterally claim as their exclusive economic zone, encompassing the entire shoreline of the island. Cyprus has been divided between its Greek and Turkish communities since 1974. In the northern third of the island, the Turkish Republic of Northern Cyprus (TRNC) is propped up and recognized only by Ankara, while the Greek Cypriot administration in the south is internationally recognized and a member of the European Union.

Although Ankara claims to be unaware of the arrest warrants, the Greek Cypriots have sought to enforce them through Interpol while closely watching the activities of some US-based and Croatian companies that collaborate with Turkey.

The Greek Cypriot push to criminalize Turkey’s exploration work has been coupled with diplomatic offensives at the EU. Last week, EU leaders threatened to slap sanctions on Turkey if it continued “illegal drilling” in Cypriot waters. In the United States, meanwhile, a bill to lift the long-standing US arms embargo on Cyprus and authorize the administration to enter into energy cooperation deals between Cyprus, Greece and Israel was submitted to the Senate in early April in what is essentially a pro-Greek Cypriot initiative. The following month, the Greek Cypriots reportedly reached an understanding with France to allow the French navy to have a permanent base on the island. In mid-June, French President Emmanuel Macron warned Turkey to "stop its illegal activities in Cyprus’ exclusive economic zone,” emphasizing that offshore drilling for natural gas was the sovereign prerogative of Cyprus, i.e., the Greek Cypriots in their capacity as the internationally recognized government of the island.

The Greek Cypriot strategy aims to push Turkey into a tight spot vis-a-vis the West by trying to draw the EU and other Westerners into the fray and to their side. The Greek Cypriots want to take advantage of Ankara’s spats with Washington to enlist US support in the eastern Mediterranean and provoke Turkey into impulsive and military reactions. Indeed, this strategy is not easy for Ankara to counter at a time when it is drifting away from the EU and NATO amid deepening crises with Washington and waning support from European states.

Still, the Turkish side has made a number of countermoves.

Last week, for instance, TRNC Prime Minister Ersin Tatar announced an inventory study with a view of reopening the city of Varosha, the island’s main tourist hub before it was abandoned and sealed off after the partition, though TRNC President Mustafa Akinci slammed the move.

Ankara is also seriously pondering declaring its own exclusive economic zone in the eastern Mediterranean as soon as possible. Two scenarios are being floated in this context. The first, touted by the so-called Euroasianists, involves the creation of an Eastern Mediterranean Energy Forum in partnership with Lebanon, Libya and Syria, with Russia to be invited as an observer. The move is proposed as a retaliation to the Cairo-based Eastern Mediterranean Gas Forum, established earlier this year by Egypt, Greece, the Greek Cypriots, Israel, Italy, Jordan and the Palestinians, with Turkey left out in the cold.

The other scenario is based on enlisting support from Britain, a guarantor state of Cyprus, along with Turkey and Greece. Intensified Turkish lobbying in London in the coming weeks should not come as a surprise.

In short, the developments in the eastern Mediterranean have steadily grown into another crisis realm that Ankara has to manage in its foreign policy, atop the conundrum in its ties with the United States and NATO over its purchase of the S-400 air defense systems from Russia. Faced with growing isolation in the eastern Mediterranean, Ankara can choose from the three following courses of action:

The option that Ankara picks will be of utmost importance, not only for its standing in the eastern Mediterranean but also for the direction its overall foreign policy will take in the coming years.