A power struggle over hydrocarbon reserves in the eastern Mediterranean Sea is becoming increasingly militarized, signaling the potential for a major crisis. 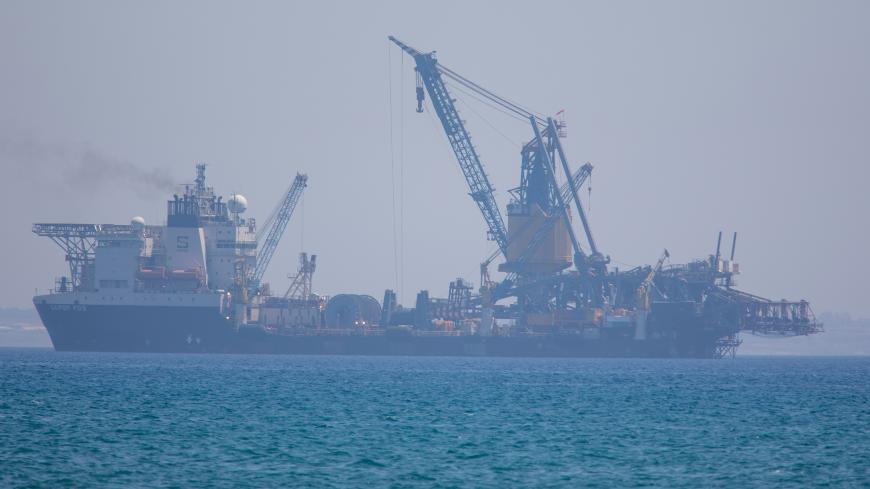 Turkey's confrontation with an Italian drilling ship in the eastern Mediterranean Sea could quickly reach crisis proportions. As I noted in an Al-Monitor story Dec. 26, developments were warning of growing tension between Turkey and the Greek Cypriots over newly discovered hydrocarbon reserves south of the island.

Indeed, the first hot military standoff of 2018 started Feb. 9 between the Turkish navy and the Saipem 12000 drilling ship of Italy's ENI SpA, which is licensed by the Greek Cypriot administration to explore hydrocarbon reserves south of the island. As the Saipem 12000 was sailing from the area known as Block 6 southwest of the island toward Block 3, Turkish naval vessels approached within 5 miles of it. The Saipem 12000 halted some 15 nautical miles from its destination in Block 3, an area 70 kilometers (43 miles) off the coast of Cape Greco on the southeastern tip of the island.

On Feb. 8, just a day before the reported standoff, ENI announced it had made a lean (residual) gas discovery in Block 6 off Cyprus. According to ENI, the well — which was drilled in water 2,074 meters (1.3 miles) deep, reaching a final total depth of 3,827 meters (2.4 miles) — has excellent reservoir characteristics.

The Turkish naval detachment that blocked Saipem 12000 has been in the region for about three months.

The Turkish General Staff issued a Feb. 14 statement that a frigate, a corvette (small warship), a fuel tanker and two assault boats have been conducting surveillance missions in the area as part of Turkey's ongoing maritime security protocol to ensure safe oil transportation and deter potential threats.

Although the statement did not mention it, there are reports that at least two Turkish submarines are part of the Turkish force. Also, the presence of a Turkish navy fuel tanker means the flotilla could stay there for weeks and operate in international waters without needing port services.

Ankara thinks the tensions in the Aegean and eastern Mediterranean Sea aren't coincidental. Ankara feels the natural gas alliance of Greece, Greek Cypriots, Israel and Egypt — being aware of the Turkish military's capacity shortcomings since the July 2016 coup attempt, its military involvement in Syria and its increasing isolation — is scheming for diplomatic, economic and military faits accomplis.

Nobody was surprised when Turkish Chief of Staff Gen. Hulusi Akar made a high-profile, well-publicized visit Feb. 9 to the Aegean and Mediterranean areas, accompanied by commanders of the Turkish navy, air force and land forces, with the stated objective of monitoring and inspecting the current posture of Turkey's military.

During that visit, Akar told journalists the Turkish military can handle it all: maintain its offensive in Afrin and de-escalation efforts around Idlib in Syria, while conducting counterterror operations against the Kurdistan Workers Party (PKK) inside Turkey and intervening in developments in the Aegean Sea and eastern Mediterranean.

"We are watching closely the developments in the eastern Mediterranean region,” Akar said.

From Akar’s remarks, it was easy to understand that the dangerous proximity of Turkish naval elements to the Saipem 12000 near Block 3 was not accidental. It was meant as a "diplomatic" message to Greek Cypriots, Italy and the European Union. The EU had stepped up its diplomatic efforts to transport the hydrocarbon reserves off Cyprus to Europe with its eastern Mediterranean pipeline project.

How far will Turkey escalate the confrontation in the eastern Mediterranean Sea?

With Ankara’s risky blocking of the Saipem 12000, exploration work has temporarily ceased. As of noon Feb. 14, the ship was still stationary.

According to its schedule, the Saipem 12000 has to complete its exploration in Block 3 before March. Ankara’s plan, for the time being, appears to be to disrupt the vessel's navigation plans and delay its activities instead of igniting a regional crisis.

Actually, to understand whether Ankara will escalate the situation, we also have to keep an eye on the Diliskelesi Port near Istanbul, where Turkey's recently purchased Deepsea Metro II drilling ship is still moored after arriving at the beginning of January.

That ship is now undergoing its final maintenance while the crew completes orientation training. The vessel's departure date and final destination are of vital importance and will indicate whether Ankara wants an escalation. If Turkish naval elements accompany the ship to the eastern Mediterranean Sea, that will be a strong indicator that Ankara defines the crisis as a military problem.