The Turkish and Greek navies conducted drills in the eastern Mediterranean this week as German Foreign Minister Heiko Mass seeks to bring both nations back to the negotiation table. 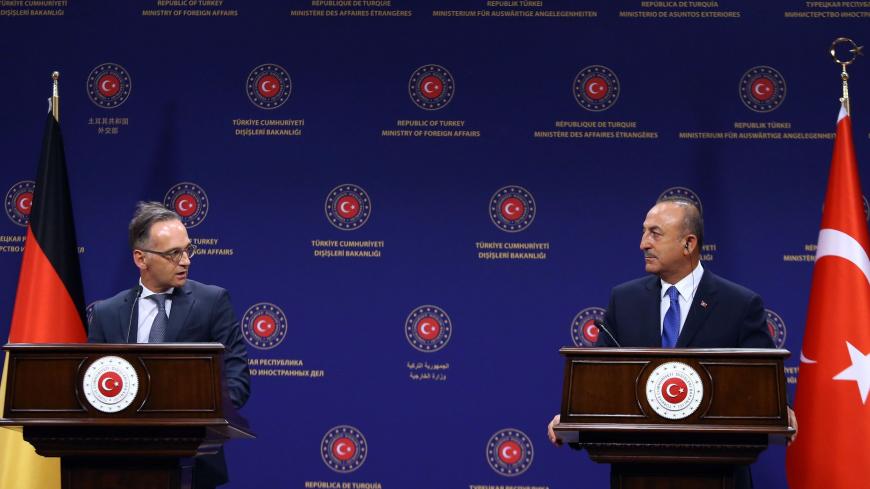 ISTANBUL — A number of naval drills are underway in the eastern Mediterranean as Turkish and Greek leaders vowed to defend their overlapping territorial claims in the region Wednesday.

Speaking at an event commemorating the anniversary of the 1071 Seljuk victory over Byzantine armies, Turkish President Recep Tayyip Erdogan said Wednesday the nation would protect its claims in the Mediterranean, Aegean and Black Seas without “any concessions.”

“We will not compromise over what belongs to us. … We are determined to do whatever is necessary,” Erdogan said, adding that Greeks were “unworthy” of the Byzantine heritage and “today commit injustices and piratical moves counting on the support of Europeans, which shows that they have failed to learn from history.”

Tensions remain high between Ankara and Athens following Tuesday's visits to both capitals by German Foreign Minister Heiko Maas, who aimed to bring leaders from both sides back to the negotiation table over ongoing maritime disputes.

Simultaneous naval drills were conducted by Turkey, Greece and Cyprus in the eastern Mediterranean Tuesday, with some exercises continuing Wednesday, amid concerns of a possible conflict in the region.

"The current situation in the eastern Mediterranean is equivalent to playing with fire," Maas said in Athens Tuesday after talks with Greek counterpart Nikos Dendias. "Every little spark can lead to catastrophe.”

Since the mid-1970s, Turkey and Greece have come to the brink of war three times, with one escalation stemming from territorial disputes in the Aegean Sea. Current tensions began after previous Ankara-Athens talks collapsed following an Aug. 6 maritime delimitation agreement between Greece and Egypt.

In response, Turkey announced its seismic research vessel Oruc Reis would resume gas exploration activities in contested areas of the eastern Mediterranean, spurring Athens to place its navy on high alert, raising fears of a military escalation between the two nations.

Though Turkey issued a Navtex Sunday extending the time frame for the Oruc Reis’ exploration activities to Aug. 27, Turkish Foreign Minister Mevlut Cavusolgu said Ankara was ready for talks with Greece following his meeting with Maas.

“We are open to talks without preconditions,” Cavusoglu said in a press conference with Maas in Ankara. "We are in favor of negotiations for fair sharing, but nobody should lay down preconditions.”

The statement was seen as a welcome opening for observers after naval exercises led to a minor collision between Greek and Turkish warships on Aug. 14. No injuries were reported. Fiona Mullen, director of the Nicosia-based research consultancy Sapienta Economics, said despite the recent naval drills, Turkey-Greece tensions will likely subside in the near future.

“It reminds me of those celebrity wrestling tournaments, where the fighters strut around in bright clothing like peacocks before the fight but the outcome is already fixed in advance,” Mullen told Al-Monitor. “I think it is a lot of theater before they sit down and do a deal.”

Maas’ shuttle diplomacy came ahead of an EU foreign ministers meeting scheduled for Aug. 27-28 in Berlin, where the issue will be discussed. EU foreign policy chief Josep Borrell, who has also worked to resolve regional disagreements, told reporters “all options” would be on the table during the meeting, including the imposition of new sanctions on Ankara and formally ending Turkey’s EU accession candidacy.

During previous Turkey-Greece tensions over maritime boundaries in July, German Chancellor Angela Merkel intervened with a phone call to Erdogan, a move that led Ankara to pause exploration activities on July 28.

EU leaders will likely take the same approach to cool the current row, though a return to dialogue is unlikely to be “an easy process,” said Zenonas Tziarras, a researcher at the PRIO Cyprus Centre and co-founder of Geopolitical Cyprus.

“Berlin seems to remain hopeful, but September is likely to be a difficult month until the upcoming EU Summit, which is seen as an important milestone,” Tziarras told Al-Monitor, referring to the Special European Council meeting set for Sept. 24-25.

By continuing gas drilling activities, Tziarras said Turkey has sought to “keep pressure” on Greece, Germany and the EU, so it has “something to negotiate with while also appearing willing to return to dialogue.”

In an effort to calm regional tensions, France joined military exercises called “Eunomia” with Cyprus, Greece and Italy that are scheduled to run Aug. 26-28. The Greek and US navies held joint drills south of Crete Monday, near the area where the Oruc Reis is operating with an escort of Turkish ships. On Tuesday, two Turkish frigates and an Italian destroyer also conducted naval exercises in the eastern Mediterranean.

Ilke Toygur, an analyst of European affairs at the Elcano Royal Institute and adjunct professor of political science at the Carlos III University of Madrid, said European Mediterranean countries “were trying to match Turkish drilling activities and demonstrate solidarity with Greece and Republic of Cyprus,” but noted, “Both sides are keeping their military interventions [within] limits so that it will be possible to go to the negotiation table before the point of no return.”

She added, “The eastern Mediterranean is a geopolitical game board right now. There are various players that are not shying away from using gunboat diplomacy. Turkey is also playing its cards to get what it wants, explicitly a fair distribution of [energy] revenues and a just settlement of maritime jurisdiction areas.”