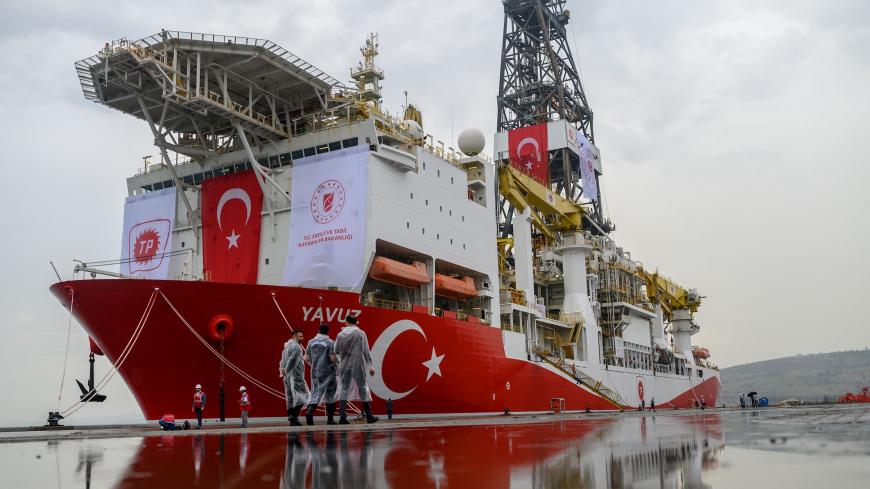 Turkish police officers patrol next to the drilling ship Yavuz scheduled to search for oil and gas off Cyprus, at the port of Dilovasi, outside Istanbul, on June 20, 2019. - BULENT KILIC/AFP via Getty Images

The news comes after Turkish navy vessels withdrew Monday from Greek waters that Ankara claims are part of its continental shelf, in an move to de-escalate recent tensions through reportedly Berlin-mediated talks between the neighboring states.

Turkish President Recep Tayyip Erdogan’s spokesperson Ibrahim Kalin said he was prepared to sit at the negotiation table with counterparts in Athens during an interview with CNN Turk Tuesday.

"In line with the instructions of our president, we are ready to discuss all issues; the Aegean, continental shelf, islands, airspace, research and screening efforts, and eastern Mediterranean along with other bilateral matters with Greece without any precondition," Kalin said.

“We want to have open channels of communication with Turkey and to discuss the issue that has been plaguing the two sides for many decades now: The demarcation of maritime zones,” Pestas said in an interview with Skai television Tuesday.

The talks are believed to be the result multiple efforts by EU Foreign Policy Chief Josep Borrell, who visited Ankara earlier this month to discuss the eastern Mediterranean tensions among other diplomatic concerns shared by Brussels and Turkey.

Germany, which took over the presidency of the European Council this month, has also taken a leading mediation role, facilitating talks between Turkish and Greek officials ahead of the bloc’s Foreign Affairs Council meeting July 13, in which French leaders unsuccessfully lobbied member states to impose new sanctions on Turkey for its continued gas exploration activities.

Some observers claim the United States may also have influenced de-escalation efforts as the Turkish and American naval forces held joint maritime exercises this week.

Now, with Ankara-Athens negotiations proceeding in various forms, some analysts expressed concerns over unresolved disputes regarding offshore resources between the Republic of Cyprus and Turkey, particularly as Ankara commences gas exploration activities in Cypriot waters once again.

“Cyprus is at risk of being sidelined in the private deals that are currently underway,” Fiona Mullen, director of Nicosia-based Sapienta Economics, told Al-Monitor. “You can’t completely deal with Greece if you don’t deal with Cyprus.”

For more than a year, Ankara has been conducting seismic research near Cyprus that Turkish officials say is meant to defend the resource revenue rights of citizens in the Turkish Republic of Northern Cyprus, a state solely recognized by Ankara and occupied by Turkish forces since a 1974 military operation.

Cyprus has since been an island divided into two territories and disputes over maritime boundaries increased following the discovery of offshore gas reserves in Cypriot waters in 2011. The issue has been a constant source of discord between Athens, Ankara and Nicosia, and tensions were heightened further when Turkey was excluded from plans to export regional gas to European markets through a proposed EastMed pipeline project.

With gas negotiations long stalled by complex and overlapping resource claims by the neighboring states, Ilke Toygur, an analyst of European Affairs in Elcano Royal Institute, said bilateral talks between Turkey and Greece may provide an avenue for progress amid the myriad disputes.

“It is clearly better for Turkey to deal with each country separately,” Toygur told Al-Monitor. “If you want concessions, it is more difficult to get them against a united European Union. Solidarity is and will be a core principle of the EU. European officials will always underline that. However, the Turkish strategy will very much depend on what is and will be on the table.”

The Greece-Turkey talks will likely center on areas along Turkey’s Mediterranean coast near the Greek island of Kastellorizo, which expands Greek maritime borders across much of southwestern Turkey’s shoreline, an issue increasingly decried by Ankara officials.

Mullen said Greek officials may propose an agreement similar to one reached between Greece and Italy earlier this month, which settled decades-long debates regarding maritime claims involving Greek islands between the two nations.

Yet much of the negotiations will likely center on regional energy projects, which Turkish Defense Minister Hulusi Akar said were “doomed to fail” during a virtual conference by the Turkish Heritage Organization Tuesday.

Though the Israeli government ratified an agreement for the pipeline July 20, Mullen said the project was unlikely to move forward and its bleak prospects could be utilized to defuse discord.

Regional actors “have invested so much political capital in the gas, but it might be a dud game,” Mullen told Al-Monitor. “So, if the EU were being clever, it’d be offering them a face-saving way out of this bind.”

“Spain is the fourth biggest EU member state which has no historical baggage … when it comes to Turkey and could contribute to the debate,” Toygur told Al-Monitor. “Turkey wants to negotiate, wants to be sitting at the table when it comes to issues that are related to its national interests — sometimes even beyond that.”