Egyptian President Abdel Fattah al-Sisi was in Athens amid common hostility toward Turkish activities in the Eastern Mediterranean. 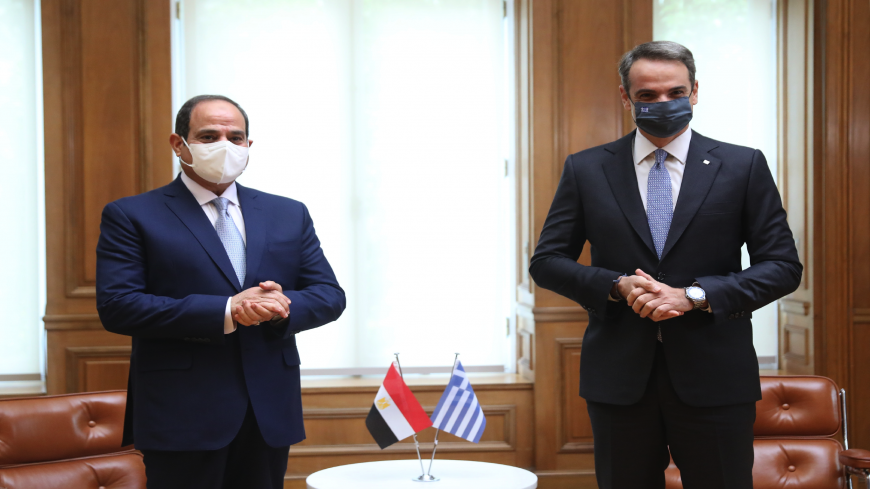 Greek Prime Minister Kyriakos Mitsotakis welcomed President Abdel Fattah al-Sisi as a “good friend and a friend of Greece” during the Egyptian leader’s first official visit to Athens since the Aug. 6 signing of a maritime accord between the two countries.

Standing with his Egyptian counterpart, the Greek prime minister hailed the maritime agreement, stating, “Our two countries have already set an example of peace and cooperation with an iconic moment on Aug. 6, when they signed an agreement on the partial delimitation of maritime zones.”

Greece views the accord with Egypt as a direct rebuke to the 2019 maritime deal between Ankara and the internationally recognized Libyan Government of National Accord (GNA). Athens contends that this agreement ignores Greece’s rightful claims to Exclusive Economic Zones (EEZ) via the islands of Crete, Rhodes and Kastellorizo, valid under international law.

Panayotis Tsakonas, head of the Security Program at the Hellenic Foundation for European and Foreign Policy, told Al-Monitor, “Greece was interested in any kind of agreement with Egypt that would manage to challenge Turkey’s fait accompli with the GNA. Now there are two direct opposing agreements that must be addressed. So for Greece, it was mission accomplished.”

In a written response to Al-Monitor regarding Greece’s recent attempts to demarcate its maritime zones, Turkish Ambassador to Greece Burak Ozugergin said, “Greece should not expect a pat on the back for finally beginning to agree with its own neighbors after several decades of unsuccessful arm-twisting. Especially when such agreements become possible after Greece’s about-face on the very positions that made life for us very problematic in the Aegean in the first place.”

Athens claims that reaching the agreement with Cairo showcases its good neighborliness and intent to work on positive developments in the Eastern Mediterranean in keeping with the United Nations Convention on the Law of the Sea.

“The Greek-Egyptian agreement practically disregards the Turkish assertion that Greek islands don't have EEZ,” Antonia Dimou, a former analyst at the Greek Ministry of Foreign Affairs and current fellow at the Institute for Security and Defense Analysis Athens, told Al-Monitor.

Egypt has emerged as a key partner for Greece as both countries challenge what they believe to be Ankara’s destabilizing influence in the region. Sisi was warmly received in Athens where he stated that Egypt “will stand by Greece and in favor of its rights, on any issue concerning the country’s security and maritime borders.”

Noha Bakr, a member of the Egyptian Council of Foreign Relations, told Al-Monitor, “Greeks and Egyptians are very close to each other, going back to the large number of Greek nationals who lived in Egypt, and today we share a common threat in [Turkish President Recep Tayyip] Erdogan’s neo-Ottoman actions in the region.”

Sisi has been deft in positioning himself as a bulwark of stability in the Eastern Mediterranean as he seeks to build on Athens’ and Cairo’s historic Mediterranean ties with an eye toward a bridge to Europe.

At a joint press conference with the Egyptian leader, Mitsotakis said, “I also assured President Sisi that my country remains a staunch supporter of deepening relations between Egypt and the European Union,” adding that “his country is, after all, an ally of Europe.”

Tsakonas told Al-Monitor that Greece’s draw as an EU and NATO member were key factors contributing to Sisi’s calculus in signing the maritime agreement with Greece.

“We know Turkey had offered an agreement to Egypt offering a bigger area of the EEZ than Egypt would gain from an agreement with Greece, but it didn't go through, and that’s because Sisi is looking for other positive aspects outside the scope of a single deal,” Tsakonas said.

Sisi has also reaped tangible dividends as an Arab leader standing with Greece. Egypt is a founding member of the EastMed Gas Forum and has positioned itself as an exporter of liquified natural gas to Europe.

Dimou said that this trend would continue, adding, “With falling oil prices, the development and export of regional gas within the immediate Mediterranean neighborhood makes more sense than ever before.”

It’s still to be seen whether the positive benefits of cooperation between Greece and Egypt, along with other regional actors dubbed the anti-Turkey alliance, will lead to a thawing of relations with Ankara.

Turkey recently announced further exploration activities of the Oruc Reis research vessel off the coast of Kastellorizo through Nov. 23. At the same time, Greece and Cyprus are pushing for sanctions on Turkey at an upcoming EU summit in December.

Dimou believes that EU sanctions could contribute to a change in Turkey’s behavior. “Economic smart sanctions can have a real impact on Turkey to bring them to the negotiating table,” she told Al-Monitor.

The Turkish side doesn’t seem to be backing down, and if EU sanctions are put in place they may serve to increase Ankara’s resolve.

Ozugergin told Al-Monitor, “In Turkey, we are convinced that the EU has not been a constructive player on Eastern Mediterranean issues.”

When asked about the possibility of sanctions from the EU, he said that the EU Council “should take into account the indisputable fact that they cannot behave as if they were an international court … and cannot make legally relevant pronouncements on maritime issues.”

While tensions are certainly running high, Sisi’s visit to Athens and the maritime accord between Greece and Egypt may also carry a small hint of restraint and the hope for eventual negotiations with Turkey.

Although Mitsotakis said that Greece and Egypt are intent to continue work on expanding their maritime demarcations, Tsakonas says that the current situation in terms of future agreements “is most probably frozen.”

Indeed, one of the more contentious flashpoints of the Greek-Turkish maritime dispute was left out of the Aug. 6 agreement.

Greece and Egypt demarcated their maritime borders up to the 28th Meridien, stopping short at the easternmost part of the island Rhodes. This left out the highly contested waters around Kastellorizo, an island with a population of roughly 500 people and part of Greece’s larger Dodecanese Island chain.

Ozugergin said that Greece’s claim to an EEZ via Kastellorizo is “with all due respect, hopelessly indefensible.”

Text in the Greek-Egyptian agreement states that further delimitation east of Rhodes will occur “in consultation with the neighboring states concerned.” This is seen as a nod that future maritime agreements in the area will need to include Turkey at the table.

As Bakr told Al-Monitor, “Egyptians and Turks are like Egyptians and Greeks when it comes to the layman in the street. But people feel very angry toward Erdogan and his support for the Muslim Brotherhood.”

In this context, the maritime agreement, which was a celebratory hallmark of Sisi’s Athens visit, may be a better indicator of where the regional countries’ sensibilities lay than the often heated rhetoric. Egypt in particular, which has shown its willingness to draw red lines where necessary, such as in Libya, is still attuned to the broader interests of Turkey.

“Egypt, to a certain extent, recognized Turkey’s arguments regarding its extensive coastlines and the effects they have on the islands,” Tsakonas said when asked why the maritime boundaries of Kastellorizo were left out of the agreement. “Egypt is balancing a number of issues and trying to take a side without provoking the side it’s not choosing — which of course is Turkey,” he said.