The United Arab Emirates deepens its strategic partnership with Greece and its influence in the Eastern Mediterranean in a coalition to check Turkish ambitions. 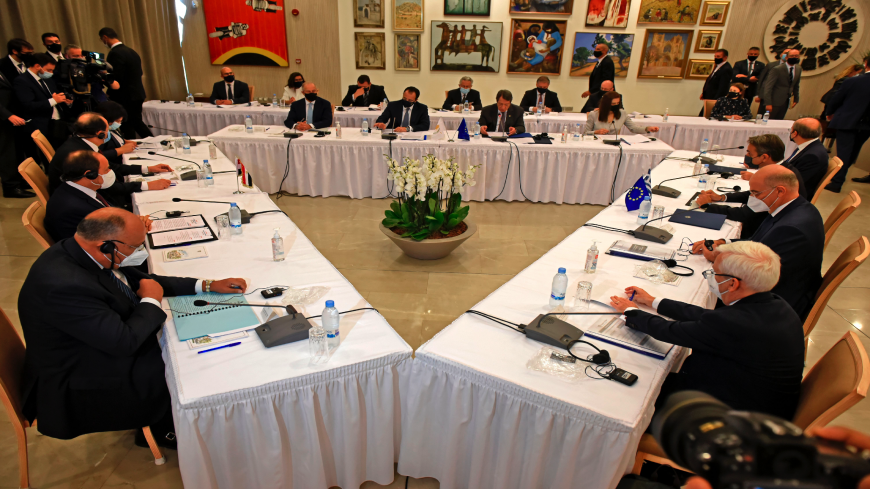 Cypriot President Nicos Anastasiades, Greek Prime Minister Kyriakos Mitsotakis, and Egyptian President Abdel Fattah al-Sisi, along with their accompanying delegations, all mask-clad due to the COVID-19 pandemic, meet during their trilateral summit at the presidential palace in Cyprus' capital, Nicosia, on Oct. 21, 2020. - IAKOVOS HATZISTAVROU/POOL/AFP via Getty Images

The United Arab Emirates (UAE) is participating for the first time, along with new arrival France, in the joint Greek-Egyptian-Cypriot Medusa-10 training exercises being held Nov. 30 to Dec. 6 off the coast of Alexandria.

The Emirati presence in the military exercises comes less than two weeks after signing a strategic partnership agreement with Greece Nov. 18, which was described to Al-Monitor as “a major achievement from Athens’ point of view” by Kostas Ifantis, professor of international relations at Panteion University in Athens.

“It is the first time in the post-WWII era that Athens concludes a bilateral agreement of this magnitude. What brought the two together in such an urgent way is Turkey and the overreaching revisionism of Ankara. It is an arrangement aiming at containing Turkey and making the deterrent strategies of both Greece and the UAE more credible,” Ifantis added.

The UAE, which has been locked in a rivalry with Turkey since 2013 over what it views as Ankara’s destabilizing support for the Muslim Brotherhood, has sided with Greece in recent years as the Hellenic country confronts Turkey over a series of maritime disputes in the Eastern Mediterranean.

“We share with Greece the same view toward Turkey regarding its policies in the Mediterranean,” Ebtesam al-Ketbi, president of the Emirates Policy Center in Abu Dhabi, told Al-Monitor. “We are trying to cooperate to face the political Islam which Turkey is using as a cover for its expansion and regional policies.”

Until now, one of the more visible examples of that support was in August when Greek and Turkish warships collided in the Eastern Mediterranean and the Gulf nation dispatched F-16 fighter jets to the island of Crete.

The recent inclusion of UAE forces in the Medusa-10 training exercises, alongside its partners who share an interest in checking Turkey's ambitions, appears to be an attempt to build on the momentum of the Greek-Emirati agreement and send a message of unity before the December European Union (EU) summit when Turkish sanctions are to be discussed.

The Greek-Emirati deal solidifies a bilateral framework for more defense cooperation between the two countries situated on near opposite geographical boundaries of the Middle East.

“The new agreement institutionalizes the stationing of military forces of one country to the territory of the other, which is very important for defense-oriented purposes,” Antonia Dimou, director of the Middle East and Persian Gulf Unit at the Athens-based Institute for Security and Defense Analyses, told Al-Monitor.

Ifantis said the agreement is also a first in the countries formally setting up a mechanism to share classified intelligence.

“At this point, we do not know whether Greece has given a heads up to NATO as far as intelligence sharing with the UAE is concerned. I would imagine Athens has alerted Washington and Paris and secured consensus,” Ifantis added.

A hallmark of the agreement is the mutual defense clause in which the two countries vow to assist the other as best as possible in light of a threat to their territorial integrity by a third party.

Sotiris Roussos, former senior Middle East expert at the Greek Foreign Ministry and currently head of the Center for Mediterranean, Middle East and Islamic Studies, pointed to this clause in highlighting the practical limitations around the agreement.

“I don't want to build high expectations around this defense treaty. If there is a confrontation between Greece and Turkey, the UAE is likely not going to come to rescue us,” he cautioned. “It’s good to have defense treaties, but they should be put in the measured context.”

Ketbi reaffirmed the Emirates’ interest in staying out of a Greek-Turkish conflict. “Both Greece and Turkey are NATO members. NATO protects Greece, not the UAE. It is not in the UAE’s interest or policy to enter a Greek-Turkish war.”

A more constrained view of the agreement may look at it along the lines of the Medusa-10 military exercises taking place.

Both are displays of goodwill and cooperation that match the strong rhetoric participants have directed toward Turkey, but their true value lies in the political cooperation taking place in the region as the countries seek to confront Ankara while being wary of provoking Turkey too much.

Indeed, all sides continue to express hope for negotiation. Turkish Ambassador to Greece Burak Ozugergin told Al-Monitor, “Turkey is ready to cooperate with Greece and to solve the issues between the two countries through dialogue, without preconditions.”

Greece too recognizes that a door should be left open to negotiate with Ankara, but for talks to take place, it says that Turkey needs to halt what it considers to be illegal drilling activities and that negotiations should focus solely on the issue of the two countries’ continental shelf and sea zones.

Ozugergin says there is a long list of items to be discussed with Athens ranging from the continental shelf to violation of the demilitarized status of the Eastern Aegean Islands, the legal status of geographical formations and issues around Greek airspace.

“Greece stubbornly rejects discussing anything but the delimitation of the continental shelf in the Aegean with us. … That is the same as trying to build a structure starting from the roof. This makes no sense. These problems are not going to go away on their own and will continue to provide irritants in the bilateral relationship unless something is done about them,” Ozugergin told Al-Monitor in a written statement.

Negotiations aren’t expected anytime soon, but that doesn't mean cooperation isn't occurring — quite the opposite.

From Abu Dhabi and Cairo to Tel Aviv and Athens, Eastern Mediterranean countries and the UAE are partnering at various strategic levels, from the EastMed Gas Forum to the Abraham Accords, driven in part by concern over Ankara’s actions.

Roussos said, “Turkey is not searching for gas or oil; it is searching for regional hegemony. Turkey believes any project, economic or political, should have its consent to be filled. They know gas is not enough.”

In the context of the Greek-Emirati agreement, two areas to watch for further defense cooperation as they seek to address Turkey will be around technical and flight training.

Athens is currently working with Israel to develop an international flight training center in Kalamata, Greece. Roussos says he can see the Hellenic Republic serving “as a discrete conduit for joint Israeli-Emirati military exercises.”

Athens and Abu Dhabi have already laid the foundation for Emirati technicians to receive training on the maintenance of the F-16 fighter jet at the Armor Training Center in Avlona, Greece.

Dimou said, “The chief of the [UAE] Armed Forces has already requested rental space for 10 years to build technician training centers. We expect more agreements around this to be finalized any day now.”

There will be challenges. According to Roussos, Greece’s defense industry is small. And like many of the Mediterranean country’s industries, it has never really recovered from the financial crisis.

The technical training around the F-16 that Dimou mentions would be via the Hellenic Aerospace Industry. The company is part of Lockheed Martin’s global co-production of the F-16, but due to staff and management issues, it is currently in jeopardy of losing its role in the supply chain.

Dimou says issues at the company are being addressed and will not stand in the way of the technical training.

Whether or not it does, the issue is symbolic of the Greek-Emirati relationship. The Hellenic country brings strategic geography and the luster of EU and NATO membership to its partnership. But as the two countries go forward, Greece will be looking for investments.

For the countries dubbing themselves the “Anti-Turkey Alliance,” the more strategic challenge will be turning what is a political partnership aimed at Turkey into a more dynamic relationship linking economies and supporting strategic investment.

Roussos says he is skeptical about the Emirates’ commitment to invest in Greece. “I have low expectations on investment from the UAE in critical infrastructure. I have heard of many promises and plans for investment but haven't seen it materialize.”

On the other hand, Ketbi says the UAE is serious about adding more layers to the partnership. “If you want a foot in the Mediterranean and someone is welcoming you like Greece, then you grab that opportunity.”