Talks could resume soon between the two countries over maritime boundaries and offshore gas drilling. 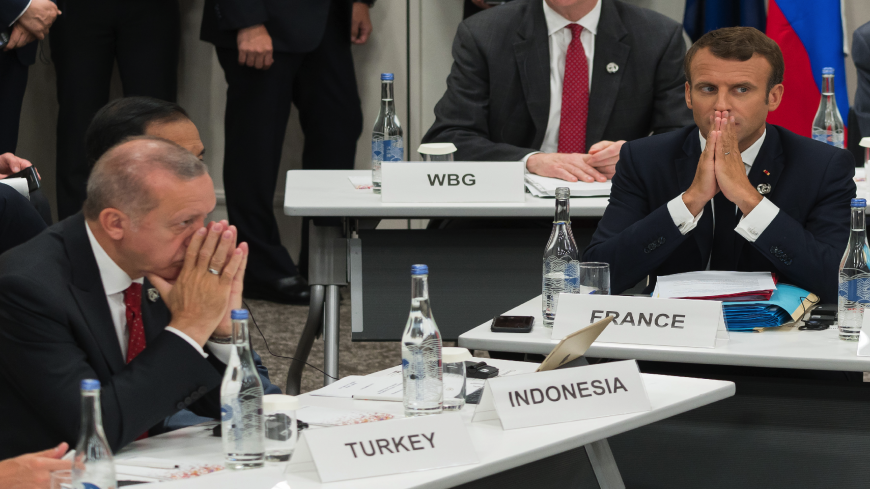 Turkey's President Recep Tayyip Erdogan (L) and France's President Emmanuel Macron gesture as they attend a meeting on the digital economy at the G20 Summit in Osaka on June 28, 2019. - JACQUES WITT/AFP via Getty Images

Turkey and Greece said they are ready to resume talks to address their respective claims for hydrocarbon reserves in disputed Eastern Mediterranean waters today amid a Turkish stand-down in the face of EU threats of sanctions.

The statement came after Turkish President Recep Tayyip Erdogan held virtual talks with German Chancellor Angela Merkel and European Union Council President Charles Michel. The European leaders have been mediating between Turkey and Greece amid worries that the standoff in the Eastern Mediterranean could escalate into a shooting war as both sides upped their military assets in the region.

In further signs of a thaw, Erdogan and his French counterpart, Emmanuel Macron, held a phone call today. The two leaders had been swapping insults until a few days ago over France’s intervention on the side of Greece and Cyprus in the Mediterranean spat. On Sept. 19, Macron extended an olive branch via Twitter. Writing in Turkish, he called for “responsible, sincere, and clear-eyed dialogue.” Erdogan responded on his own official feed that Turkey would “heed every sincere call” and push for a diplomatic solution that would be a win “for all.”

The Turkish presidency said in a readout of the call that Erdogan had noted tensions in the Eastern Mediterranean were caused by the disregard for Turkey and Turkish Cypriots' legitimate rights and that he could not understand France's support for Greece and Greek Cypriots' "maximalist positions." It added that Erdogan had relayed Turkey's desire to "discuss and resolve all problems at the table," and that he expected a "constructive approach" from France in this regard. There was no readout from the French presidency as Al-Monitor went to press.

Luck appeared to favor Turkey today. The EU said that it had postponed a special European Council meeting that was planned for Sept. 24-25 to weigh possible sanctions against Turkey due to Michel’s possible exposure to the coronavirus. The meeting has been rescheduled for October 1-2, an EU spokesman said.

The delay will likely ease pressure on Turkey’s struggling currency, which hit new record lows against the dollar today. It will also allow more time for deconfliction talks between Turkish and Greek military officials being hosted at NATO headquarters in Brussels. A fifth round of talks took place today, and Turkey’s Defense Ministry said a further round is expected to take place next week.

Nicholas Danforth, a fellow at the Wilson Center’s Kennan Institute and an expert on Turkish history, said, “Erdogan seems to have backed down for now in the face of potential EU sanctions that could have hit Turkey’s economy at a perilous moment.”

Turkey’s spiraling economic woes are one of the main reasons the threat of EU sanctions has forced Erdogan to back down. Macron’s posturing on the side of Greece and Cyprus, deploying a warship to the Eastern Mediterranean and netting a deal to sell 18 of its Rafale jets to Athens in the bargain has been ridiculed by Turkey. But Ankara’s claims that France was isolated within the EU seemed overblown as the bloc closed ranks and froze the assets of Avrasya Shipping, whose Tanzanian flagged cargo vessel was at the center of a dangerous escalation in June between France and Turkey off the Libyan coast.

Acting on intelligence that the Turkish ship was carrying weapons in violation of a UN embargo, a French frigate wanted to check the Cirkin in line with its mandate as part of NATO’s Operation Sea Guardian that enforces the ban.

But it is US pressure, including a trip by US Secretary of State Mike Pompeo to Cyprus on Sept. 12 in which he rebuked Turkey over its actions in the Eastern Mediterranean, that may have tipped the scales. Jalel Harchaoui, a Libya expert at the Clingendael Institute, a think tank based in The Hague, told Al-Monitor, “On Sept., 13, the Turkish seismic research ship Oruc Reis left disputed waters.” He was referring to Turkey’s withdrawal of the vessel that became the focus of Greek ire. “But this is very attributable to pressure from Pompeo rather than to posturing by the French military,” Harchaoui told Al-Monitor. “Now President Macron is interested in launching a new round of diplomacy, including on the Libyan file,” he observed. “The exercise is meant to show France as an actor willing to talk to everyone — but Paris’ intention is also to depict Erdogan’s Turkey as a state uniquely prone to violating international laws and conventions.”

Erdogan told the UN’s General Assembly differently today. He said Turkey was willing to solve its ongoing standoff with Greece and Cyprus over drilling rights in the Eastern Mediterranean through dialogue “based on international law.” He added, “However, I would like to clearly state that we will not tolerate any imposition, harassment or attack in the opposite direction." Turkey and the Turkish Cypriots could not be expected to forsake their rightful share of the Eastern Mediterranean’s hydrocarbon wealth. As the country with the longest Mediterranean coast, few can dispute that Ankara has a legitimate point. Turkey seems bent on ensuring that as long as its demands remain unaddressed it will not let others exploit and sell gas in the Eastern Mediterranean. However, the bellicose manner in which it articulates its position has apparently backfired, for the moment at least.

Yet Danforth cautioned, “This hardly means the conflict is over. The talks [between Greece and Turkey] are unlikely to lead to any substantial breakthroughs, leaving Erdogan to escalate again when feels like Turkey is in a stronger position.” Danforth described Erdogan’s modus operandi as “push, pocket any concessions or pause to negotiate if the pushback is too strong, and repeat as needed.”

“It’s a perfect strategy if you prioritize short-term concessions and discount the longer-term damage to bilateral relationships,” Danforth concluded.