As Turkey bemoans its loneliness in a bitter row with Greece over energy exploration in the Mediterranean Sea, Moscow says it is ready to step in to mediate talks. 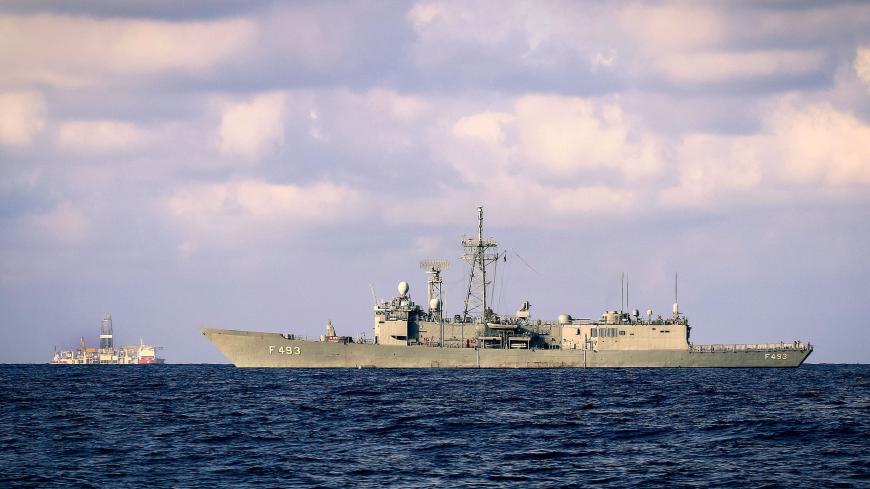 A picture taken on Sept. 25, 2019, in the Mediterranean Sea off the coast of Cyprus shows a Turkish army frigate, the TCG Gelibolu, (R) and the drilling vessel Fatih (L), which was deployed by Turkey to search for gas and oil in waters considered part of the EU state's exclusive economic zone. - AFP via Getty Images

ISTANBUL — Russia is offering to mediate with Turkey in a dispute over energy exploration in the eastern Mediterranean Sea after Turkish President Recep Tayyip Erdogan questioned the European Union’s sincerity on resolving a bitter row with members Cyprus and Greece.

Turkey has long been at odds with neighboring Greece and arch foe Cyprus over what demarcates maritime borders in the Mediterranean and Aegean Seas. Now, a Turkish seismic research ship backed by naval warships is exploring in the disputed waters, pitching tensions to their most dangerous levels in decades.

Foreign Minister Sergey Lavrov said at a news conference after meeting Cyprus President Nicos Anastasiades in Nicosia on Tuesday that Russia was prepared to step in to “resolve differences through dialogue and within a legal framework,” should it be invited to do so.

A Russian entry into the eastern Mediterranean fray follows months of attempts by the European Union, led by Germany, to defuse tensions. Russia enjoys good relations with both Ankara and Nicosia and is involved in energy projects across the eastern Mediterranean, but Moscow’s interventions could complicate the European-led process. The United States, embroiled in an acrimonious election campaign, is conspicuous in its absence.

Last week, NATO said its members Greece and Turkey would begin technical talks to reduce the risk of accidents; already the military buildup at sea led to a collision with a Greek ship last month. Those talks have been delayed until Thursday. Greece said last week Turkey must end its “provocations” before it will sit down for talks.

Turkish Foreign Minister Mevlut Cavusoglu accused Greece on Tuesday of rejecting reconciliation efforts. "Greece has made it clear that it is not in favor of dialogue by saying no to the recent initiatives," he said. “If Greece is so confident, then it should sit at the table. It should tell everyone why it is justified.”

Erdogan spoke by phone on Sunday with Charles Michel, the president of the European Council, which will discuss the dispute at a meeting scheduled for Sept. 24. Michel has said Europe will use a “carrot and stick” approach with Turkey and the EU has already imposed some sanctions on Ankara.

In a readout of the call, Erdogan’s office said European politicians were engaging in “provocative rhetoric" and "President Erdogan called on EU institutions and member states to remain fair, impartial and objective and act responsibly about regional issues, the eastern Mediterranean in particular.”

Marc Pierini, a former EU ambassador to Turkey and now a visiting scholar at Carnegie Europe, said many in Europe are sympathetic to Turkey’s assertions. “These political and legal claims have validity, and you can see that translated in the repeated availability of the European Union, Greece and Cyprus to negotiate but not with a gun to the head. … This is the opposite of European political culture,” he told Al-Monitor.

At the heart of the dispute is Greece’s argument that its dozens of islands near the Turkish coastline should be considered when determining its continental shelf, in accordance with the UN Law of the Sea. Turkey has not signed that treaty and wants the continental shelf measured from its mainland.

Turkey’s standoff with Cyprus, which it invaded in 1974 in response to a Greek Cypriot coup, has long defied resolution. Ankara wants Turkish Cypriots in the island’s breakaway north to have a stake in the potential gas bonanza but the international community only recognizes the Greek Cypriot government as the island’s legitimate authority.

“Every political, diplomatic and military wrong or disrespect committed against our nation does not force us from our path but instead strengthens our resolve,” Erdogan said on Monday after a cabinet meeting. “A country with 780,000 square kilometers [485,000 miles] of land is trying to imprison us on our shores with its 10-square-kilometer islands. When we spoiled this game, we found ourselves alone.”

Indeed, Turkey was left out of the EastMed Gas Forum earlier this year, which brings together Egypt, Israel, the Palestinian Authority, Jordan, Greece, Cyprus and Italy to create a major energy hub in the region. Turkey’s disputes with Egypt, Cyprus and Israel kept it on the sidelines.

Russia is holding two military exercises off the coast of Cyprus, and the United States is lifting part of a longstanding arms embargo on Cyprus, put in place to protect Turkish Cypriots. France flew fighter jets to Cyprus last month to patrol the exclusive economic zone claimed by Nicosia.

Turkey’s military is participating in exercises in northern Cyprus, the breakaway Turkish Cypriot enclave that only Turkey recognizes. For its part, Greece said on Monday it will upgrade its military with arms purchases and more personnel.

Erdogan argues Turkey is too great a power to count out in the new energy game in its backyard. He is pouring billions of dollars into the military and has said that Turkey will provide all of its own arms by 2023, and its navy may soon outgun Greece’s.

“Turkey is a growing military power and will have a larger force projection capacity in the next few years. But this is exactly why the war narrative used now is not acceptable. Because all of NATO’s mechanisms are not functioning [with Turkey], the level of trust is not what it was. The problem is the bipolarity: Turkey is in NATO when it’s convenient, and it’s not in NATO when it’s not convenient,” Pierini said.

He said European leaders are flummoxed by Turkey’s timing and the degree of its hostility, considering initial gas discoveries are nearly a decade old and extraction of any gas is a distant, expensive prospect.

One explanation may be that the bellicose rhetoric taps into a rich vein of Turkish nationalism, a sentiment that Erdogan has stirred repeatedly in recent months as opinion polls show support for his ruling party slumping amid a deep economic contraction, worsened by the coronavirus pandemic.

“All politics are local [and] this may be useful with the Turkish public,” Pierini said. “But negotiations would eventually mean a compromise, and will that be politically feasible?”