EU leaders will gather on Sept. 24 to discuss sanctions on Turkey over its aggressive stance against Greece and Cyprus in the eastern Mediterranean, where despite its hawkish statements, Ankara may be backing down. 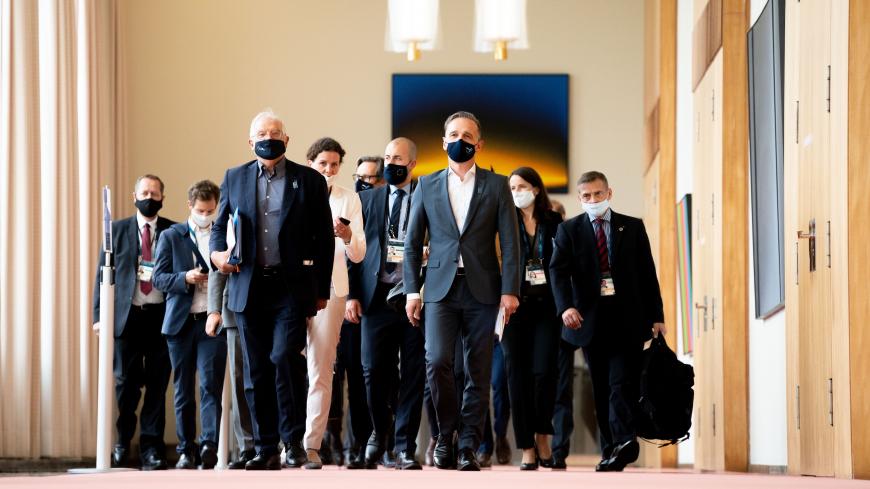 German Foreign Minister Heiko Maas and EU Foreign Minister Josep Borrell make their way to a press conference after informal talks between the EU foreign ministers at the Foreign Office in Berlin on Aug. 28, 2020, in Berlin, Germany. - Kay Nietfeld/Getty Images

Turkish Foreign Minister Mevlut Cavusoglu said he does not believe the European Union will impose sanctions on Turkey for its dispute with Greece over territorial claims in the eastern Mediterranean Sea, hinting that should it do so, Turkey could unleash millions of migrants on Europe. “We made the decision not to prevent migrants from going to Europe and this decision is still valid,” Cavusoglu told the pro-government NTV news channel today.

Cavusoglu repeated Ankara’s claims that it was France, Greece and Greek Cyprus who were pushing for sanctions that are set to be weighed at a meeting of the EU Council of Ministers on Sept. 24-25 in Brussels. Cavusoglu said that Ankara had succeeded in making the EU see reason. “As we explained ourselves, EU members came to realize that we were right,” Cavusoglu claimed. Recent developments, however, suggest the opposite: that faced with the threat of EU sanctions and rumblings of discontent from Washington, it's Ankara that’s backing down.

The first signs of a perceived climbdown came over the weekend when the Turkish seismic survey vessel Oruc Reis, which had been exploring for hydrocarbons in waters claimed by Cyprus and Greece, sailed back to Antalya in southern Turkey. Cavusoglu had earlier said the ship would continue its mission beyond the Sept. 12 expiration of its Navtex, or navigational notice. Greek Prime Minister Kyriakos Mitsotakis welcomed the move. “The return of the Oruc Reis is a positive first step. I hope there will be continuity. We want to talk with Turkey, but in a climate with no provocations,” Mitsotakis told reporters on Sunday. “A sanctions lists exists as an option. Our desire is to not see it implemented, but it will be done if the other side is not returning to the path of logic,” he added.

Ankara swiftly denied that it had made any concessions to Greece, its NATO ally. Turkey’s Energy Ministry asserted in a statement that the vessel had returned for routine maintenance and that it would resume its activities. Cavusoglu echoed the rebuttals today. Yet he described Mitsotakis’ call for a talks as “a positive, moderate” step toward establishing dialogue.

In a further sign of a thaw, Greek and Turkish military officials are expected to meet at NATO headquarters in Brussels tomorrow.

The Oruc Reis’ journey back to Turkish shores coincided with a visit by US Secretary of State Mike Pompeo to the internationally recognized Greek part of the divided island of Cyprus.

After a meeting with Cypriot President Nicos Anastasiades, Pompeo appeared to lend support to Greek and Cypriot arguments on the eastern Mediterranean that are based on the UN Convention of the Law of the Sea — which the United States has yet to ratify, as does Turkey.

“We remain deeply concerned by Turkey’s ongoing operations surveying for natural resources in areas over which Greece and Cyprus assert jurisdiction,” Pompeo said. Pompeo’s trip followed the partial lifting of a decades-long arms embargo imposed by the United States over Cyprus and days after Russia’s foreign minister traveled to the island.

France, however, has emerged as Greece’s staunchest ally in recent months, sending a warship to the eastern Mediterranean to participate in joint exercises with Greek frigates and Rafael fighter jets to Crete. France’s President Emmanuel Macron is also leading the chorus of calls for EU sanctions on Ankara. It's made him Turkish President Recep Tayyip Erdogan’s favorite bugbear, one with which to whip up nationalist fury and hopefully divert the public’s attention from Turkey’s sagging economy.

Macron made it clear that the dislike was mutual ahead of a summit of southern EU member states known as the “Club Med” that was held on Sept. 10 in Corsica to rally support against Turkey. Macron said Turkey was no longer a partner in the eastern Mediterranean and that “the Turkish people deserve something different” from how Erdogan’s government “currently behaves.” His comments spurred a furious response from Erdogan, who warned him to not “mess with Turkey and the Turkish people.”

German Chancellor Angela Merkel has been seeking to defuse the crisis through mediation. Ankara has seized on Germany’s efforts as proof that the EU is divided and weak and that Macron is isolated. Cavusoglu claimed today that the French leader was “dishonest” and that he had “gone off the rails.”

For a while it seemed like Merkel was making progress when Greece and Turkey began technical talks in August. But they broke down when Greece announced it had signed an exclusive economic zone agreement with Egypt in the Eastern Mediterranean. It overlaps with the zone staked out in a controversial deal signed between Turkey and Libya’s internationally recognized Government of National Accord last year.

Turkey’s threats to flood Europe with millions of Syrian and other illegal migrants resonates loudly with Merkel. Her decision in 2015 to let in one million Syrians triggered a huge popular backlash. Far-right populists cashed in. Erdogan has not shied away from mobilizing the millions of diaspora Turks in Europe to create turmoil in Germany and the Netherlands, either.

Despite German squeamishness, the emerging consensus among EU diplomats is that the best way to deal with Erdogan is to respond to his hardball tactics in kind.

“I’d say the risk for Turkey is that all of Europe eventually concludes Macron’s pushiness is the only way to deal with Erdogan,” concurred Nicholas Danforth, a fellow at the Wilson Center’s Kennan Institute. “Whatever actually prompted the Oruc Reis to return to port, many will attribute it to Europe’s concerted response. Turkish foreign policy has achieved the unthinkable: make French saber-rattling seem sensible,” Danforth told Al-Monitor.

A veteran observer of Turkish politics who sought anonymity in order to speak freely warned, however, that through sanctions, the EU risks “accelerating Turkey’s metamorphosis into a hostile rogue state, which will strategically paralyze the eastern Mediterranean, and end up a formal military ally of Russia and China.” Some would argue the EU shared responsibility for Ankara's current trajectory when several EU leaders signaled early on that Turkey, with its large Muslim population, would never be accepted as a full member even as it began now-stalled membership talks in 2005.

Either way, recent history suggests that Erdogan knows when to step back from the brink: When Russia’s Vladimir Putin slapped biting economic sanctions on Turkey after it downed a Russian fighter jet over Syria in November 2015, Turkey gave up its support for Sunni opposition rebels in Aleppo. When President Donald Trump imposed Magnitsky Act-inspired sanctions on two Turkish cabinet ministers after Turkey refused to free North Carolina pastor Andrew Brunson in August 2018, Brunson was allowed to walk. Meanwhile, Turkey has still to unpack Russian-made S-400 missiles — Ankara claims COVID-19 got in the way — to avert congressional sanctions.

Yet Erdogan has seen that bullying and disruption can work, as when Trump let Turkish troops attack Washington’s Syrian Kurdish allies in October 2019.

His appetite for risk served him well in Libya, where Turkey’s military intervention forced the eastern warlord Khalifa Hifter backed by Russia, the UAE, France and Egypt to call off his year-long campaign to capture Tripoli in May and beat a humiliating retreat.

But Athens’ maritime deal with Egypt has thrown a spanner in the works. Italy, which has largely sided with Turkey in Libya, may be changing its tune. “Turkey’s overt military intervention in Libya and its push to expand its political and economic footprint in the Central Maghreb have caused Italy as well as France to view the Eastern Mediterranean conflict through the lenses of their economic interests in Africa,” noted Michael Tanchum, a senior fellow at the Austrian Institute for European and Security Policy and a professor of Eastern Mediterranean and Middle East affairs at the University of Navarra in Spain. “This will impact the politics of the 24-25 European Council meeting and could influence EU politics well beyond. If Italy swings toward a position more similar to France, then the entire EU south will swing in favor of a tougher position toward Turkey. And it is Italy’s interest in Libya that could be the tipping point.”