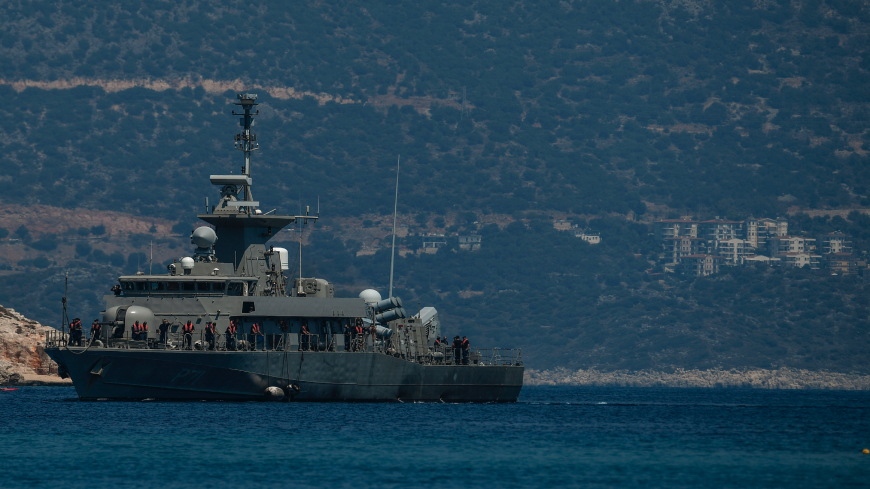 The Hellenic Navy Roussen or Super Vita class Fast Missile Patrol Boat P 71 HS Ritsosy is seen off the tiny Greek island of Kastellorizo, officially Megisti, the most southeastern inhabited Greek island in the Dodecanese, situated two kilometers off the south coast of Turkey, where the Kas resort can be seen on Aug. 28, 2020. - Photo by LOUISA GOULIAMAKI/AFP via Getty Images

Greece’s government is discussing plans to buy new military aircraft from France amid Turkey’s moves to explore for hydrocarbons in waters claimed by Athens in the eastern Mediterranean.

Reuters on Monday cited a Greek official as saying no deal had been struck yet, contradicting Greek news reports that an agreement had already been reached to acquire 18 Rafale fighter jets.

"We are in talks with France, and not only with France, in order to increase our country's defense potential," Reuters cited the official as saying, adding that the discussions include “the purchase of aircraft.”

Why it matters:  Turkey’s push in the eastern Mediterranean is bringing regional countries and the European Union together in opposition, with France’s leaders eager to step in.

Last week, fighter aircraft from France and the United Arab Emirates joined the Hellenic armed forces for joint military exercises based out of Souda Naval Base on Crete. Italian forces also joined the exercise.

The EU reiterated last week the possibility of placing economic sanctions on Turkey for sending a research vessel, the Oruc Reis, to explore for hydrocarbon reserves in waters claimed by Greece.

In response to the tensions, Turkey said it would launch live-fire exercise this week in an area between Turkey’s coast and Cyprus.

What’s next:  Ankara on Monday again prolonged the Oruc Reis’ mission, this time issuing a new NAVTEX that said its work will continue until Sept. 12.

Germany is seeking to mediate the dispute, and both Greece’s and Turkey’s foreign ministers have expressed openness to engaging with German Foreign Minister Heiko Maas to resolve the tensions.

On Tuesday, Turkey’s Foreign Minister Mevlut Cavusoglu said Ankara was open to dialogue with Greece, but President Recep Tayyip Erdogan mocked Greece as “incompetent” during a speech at the presidential complex and said “regional and global power” Turkey was being treated unjustly.

Know more:  Cengiz Candar digs up the ideological roots of Erdogan’s strategic ambitions in the Mediterranean and what they portend for the NATO alliance.