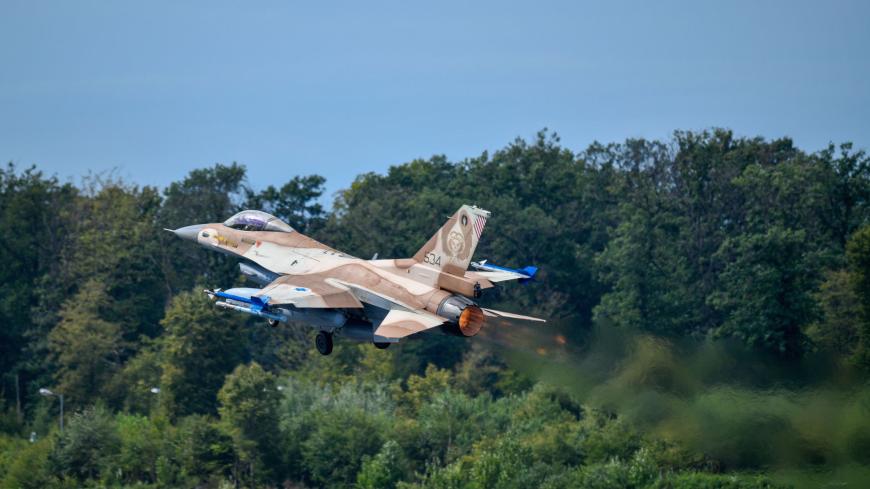 A fight plane of the type F-16 (L) of the Israeli Air Force (IAF) starts from the airbase in Nörvenich, western Germany, on Aug. 20, 2020, during the first joint German-Israeli military air exercise "Blue Wings 2020". - SASCHA SCHUERMANN/AFP via Getty Images

The aircraft will partake in training exercise with Greece’s military over the Eastern Mediterranean amid heightened tensions with Turkey, which has deployed naval vessels to escort a hydrocarbon exploration ship to waters claimed by Greece.

The deployment comes as Turkey also prepared to announce its largest-ever natural gas discovery in the Black Sea, and just a week after the UAE announced its formal recognition the state of Israel in a historic deal brokered by the US.

Abu Dhabi’s deployment to Athens’ Souda airbase is the latest sign of renewed regional opposition to Turkey’s ambitions in the Mediterranean.

Israel last week joined Cyprus, Egypt, and France in voicing support for Greece in the dispute. Turkey originally appeared to back off its exploration mission earlier this year after objections from the European Union and US, but then dispatched the vessel, the Oruc Reis, on August 10.

France last week sent Rafale fighter jets to Souda and a naval frigate to the eastern Mediterranean for exercises alongside Greece’s navy in an effort to deter Turkey’s activities.

French President Emmanuel Macron called on Ankara last week to halt its research in the area. Macron called for sanctions against Turkey last month for what he said were “violations” of the sovereignty of Cyprus and Greece.

A US Navy expeditionary sea base arrived in Souda Bay on August 18 as part of a pre-scheduled deployment. The US Navy said the deployment was not in response to regional tensions.

Last week a Greek Navy frigate, the Limnos, collided with one of Turkish naval vessels guiding the Oruc Reis.

A source at the Greek defense ministry told Reuters the incident was an accident, but Ankara called it a “provocation.” Turkey’s President Recep Tayyip Erdogan did not immediately confirm the incident but said “a high price” would be paid for any attack on Turkey’s exploration vessel.

Greek Defense Minister Nikos Panagiotopoulos later congratulated the captain of the ship, saying he had “done his duty,” Ekathimerini reported.

The Oruc Reis’ is set to conclude its exploratory mission on Sunday, after laying some 1,700 meters of cable, Turkey’s energy minister has said.