Turkey backs off in EastMed, but for how long?

Turkey's step back in the eastern Mediterranean standoff may be a tactic to avoid EU sanctions instead of a genuine effort to de-escalate. 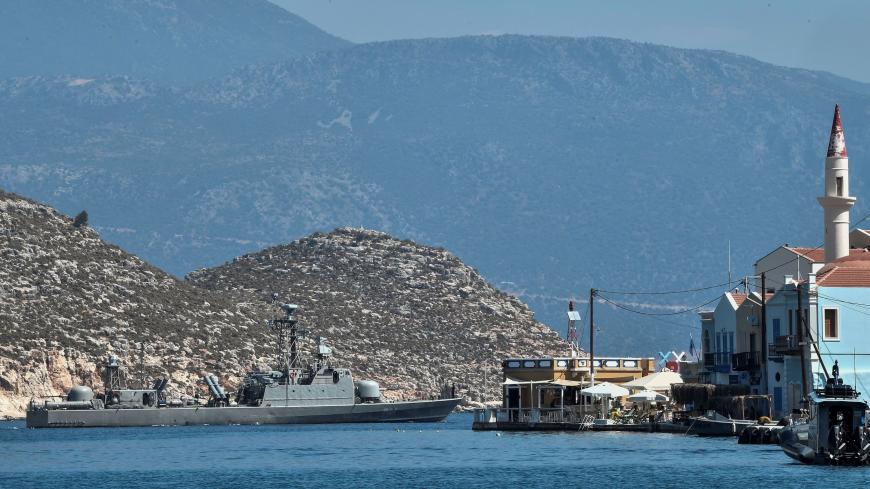 A Greek navy boat leaves the port of the tiny Greek island of Kastellorizo, the southeasternmost inhabited Greek island in the Dodecanese, just off the coast of Turkey, on Aug. 28, 2020. - LOUISA GOULIAMAKI/AFP via Getty Images

Turkey withdrew its seismic research vessel, the Oruc Reis, from the contested waters of the eastern Mediterranean Sea, where tensions triggered by the ship’s activities have run high for more than a month. The move came as a surprise for many, and observers wonder whether the move is just a tactical pause.

The move closely followed a showdown between the two NATO allies. On Sept. 13 Greek President Katerina Sakellaropoulou visited the island of Kastellorizo, or Meis in Turkish, a Greek island with about 500 inhabitants only a mile off Turkey's coast and some 355 miles (570 kilometers) from the Greek mainland. The Turkish side interpreted the visit as a provocation amid the dangerous escalation in the eastern Mediterranean. In response, Turkey's defense minister and the top military brass traveled to the coastal town of Kas, just across the water from the Greek island.

The Oruc Reis, which had been exploring the contested waters for hydrocarbon resources accompanied by Turkish warships, withdrew from the zone and returned to port in Turkey’s coastal province of Antalya. According to a NAVTEX issued by Turkey this month, the ship was expected to continue its research in the contested waters until Sept. 25.

Many observers consider the withdrawal a step back by Turkey. Although the Turkish Energy Ministry quickly announced that the vessel had left the area for refueling and maintenance, the statement convinced no one.

It is also no coincidence that the move came as Secretary of State Mike Pompeo was visiting the Greek Cypriot administration, which is not recognized by Turkey. During his visit, Pompeo stressed the need for a de-escalation, calling on Turkey to stop its drilling activities in the conflicted zone.

The Turkish political opposition also interpreted the withdrawal as a concession.

Greek Prime Minister Kyriakos Mitsotakis welcomed the move. “Greece is ready to start a new cycle of exploratory contacts with Turkey," he said in a Sept. 13 TV interview.

Turkish Foreign Minister Mevlut Cavusoglu tried to downplay the Turkish ship’s withdrawal, saying, “The Turkish opposition claims that we have conceded are not true. The ship will be back once it is refueled and maintenance work is completed.”

Although it’s clear that Erdogan has backed down, he is clearly timing his comeback rather than working for de-escalation and prioritizing diplomacy.

Erdogan tacitly conceded to his new nemesis, Macron. During a summit between the Mediterranean countries of the European Union on Sept. 10, Macron lambasted Ankara. “Turkey is no longer a partner in the eastern Mediterranean,” Macron said, adding that Erdogan “was the problem.”

Erdogan’s response was fierce as usual, but he must have realized at the summit that all the Mediterranean EU countries would line up behind Greece and France at the end of the day. The European Council is expected to discuss sanctioning on Turkey on Sept. 24-25.

It is also no coincidence that Erdogan’s step back came two days after the international credit rating agency Moody’s downgraded Turkey’s credit rating to an all-time low. Moody’s cited three key drivers for the downgrade, explaining, “Turkey's external vulnerabilities are increasingly likely to crystallize in a balance of payments crisis. As the risks to Turkey's credit profile increase, the country's institutions appear to be unwilling or unable to effectively address these challenges. Turkey's fiscal buffers are eroding.”

Facing a deep economic and financial crisis, Turkey has used various expedients to counter the depreciation of the Turkish lira without success. Since the beginning of 2020, Turkey’s Central Bank has used billions of dollars from its hard currency reserves to stop the weakening of the Turkish lira. Turkey’s economy heavily relies on foreign markets, especially the European Union, for exports, imports and for short-term finance and technology with no alternatives. Thus, EU economic sanctions could have a fatal impact on the Turkish economy and Erdogan’s survival.

Yet despite this prospect, Turkey’s withdrawal does not mean that Ankara will lean on diplomacy to solve highly complicated territorial conflicts between Turkey and Greece. The Turkish power structure does not have much room for diplomacy. Under Erdogan’s autocracy, the Turkish Foreign Ministry is a highly politicized public relations instrument.

Erdogan's foreign policy is a reflection of his heavy-handed style in domestic politics that leaves no room for dissent. Its gunboat diplomacy in the eastern Mediterranean has been shaped by anti-US, anti-EU Eurasianist sentiments and expansionist doctrine.

Erdogan counts many ultranationalists among his allies, including former hawkish navy generals who have no use for diplomacy in dealing with Greece. They use Greece's claims over the contested waters to feed their anti-Western and pro-Russian stance.

As long as Erdogan's alliance with the ultranationalists continues, there is not much room for diplomacy and negotiated settlements in the eastern Mediterranean.

Thus, Erdogan’s decision to withdraw the Turkish ship from the conflicted area might only mark a respite until the end of the upcoming EU summit in a bid to dodge possible EU sanctions. After sanctions that could further damage the Turkish economy and his own chances of survival are averted, he may well revive his belligerent eastern Mediterranean policy. Erdogan will always need nationalism and confrontational foreign policy to unite a highly polarized Turkish society and consolidate his support base.