Agreements between Turkey and Libya sparked anger among stakeholders in the Libyan civil war and in maritime drilling in the Mediterranean Sea. 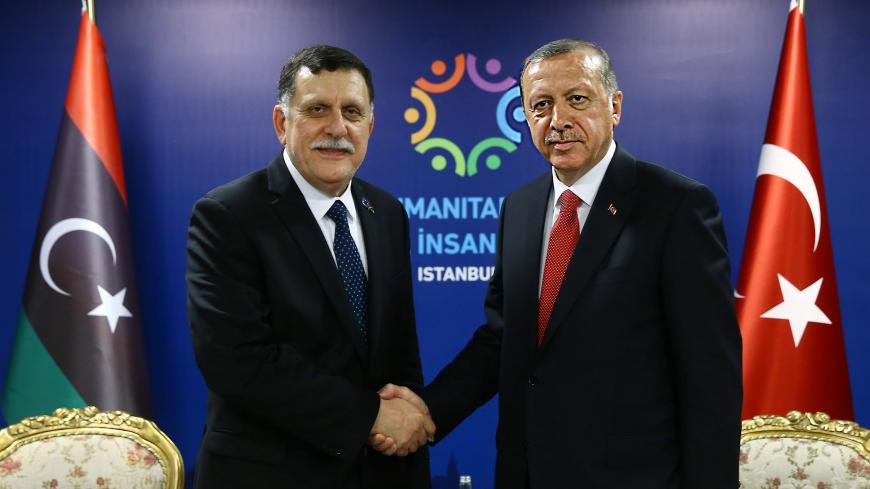 Turkey's recent maritime and security agreements with Libya's UN-backed Government of National Accord (GNA) are creating waves in the eastern Mediterranean and beyond.

Turkey's legislature appeared ready this week to approve a military cooperation agreement to support the GNA against the Libyan National Army led by Gen. Khalifa Hifter and supported by Egypt, the United Arab Emirates, France and Russia. Turkey had already created ripples of discord after its parliament ratified Dec. 5 a maritime memorandum of understanding concluded last month between Turkish President Recep Tayyip Erdogan and Fayez Mustafa al-Sarraj, chairman of the Presidential Council of Libya and GNA prime minister.

Libya is divided into two warring governments. The GNA is based in Tripoli in the west. Hifter is the military leader for the elected parliament's government in the east, in Tobruk. Despite UN backing, the government in Tripoli hasn't been able to establish authority outside west Libya. Hifter's army has been battling to take control of Tripoli.

Libyan Interior Minister Fathi Pashaga talked about the security cooperation agreement between the GNA and Turkey during a televised meeting Nov. 27. “The agreement covers all security aspects related to fighting terrorism, organized crime, illegal immigration and intelligence information exchange with the Turkish government,” he said.

Commenting on the agreement's possible impact on the war raging between GNA forces and the Libyan National Army, Pashaga said, “This deal will be of help to our forces in the battle for Tripoli.”

Erdogan already supplies weapons to the GNA despite the UN arms export ban to Libya. The new agreement pledges ground troops if needed.

The agreements sparked much controversy and condemnation internationally and in Libya. Hifter's spokesman said during a Dec. 3 press conference, “The agreements between Erdogan and Sarraj are a new conspiracy that will send Libya into a spiral of chaos, and will allow the establishment of Turkish military bases in Libya.”

Aguila Saleh, speaker of the eastern Libyan parliament, sent a letter Dec. 2 to UN Secretary-General Antonio Guterres and to the Arab League demanding that they withdraw their recognition of the GNA.

“The aim behind this agreement is to violate the Libyan territory, airspace and ports,” he said in the letter.

The Egyptian and French foreign ministers also condemned the agreements between Turkey and the GNA, saying they violate international law.

The Egyptian Foreign Ministry affirmed in a November statement that it “considers the agreements to be illegal and lacking any legal effect, per Article 8 of the Skhirat Political Agreement between the warring parties in Libya, signed in 2015 in Morocco under the UN auspices." The ministry continued, "The agreement specified that the GNA has no prerogative to conclude international agreements without referring back to the Libyan parliament.”

Egyptian Foreign Minister Sameh Shoukry contacted his counterparts in Cyprus and Greece to discuss the legal effect of the agreements. He said during a Dec. 3 call with the UN envoy to Libya, Ghassan Salama, that "the deals will deepen the dispute between the Libyans and disrupt the political process."

Also, the European Union has called on Turkey to respect the principles of neighborly relations and the sovereignty of all coastal states and their sovereign rights in maritime areas. The Russian Foreign Ministry has asked Turkey to avoid any step that could increase tension.

Despite the angry reactions, Erdogan said the agreement concluded between his country and Libya on determining maritime influence in the Mediterranean "is a sovereign right of both countries."

Youssef al-Aqouri, head of the Foreign Affairs Committee of the parliament in Tobruk, said, “The security and maritime agreements were not submitted to parliament, which is the legislative body that has powers to ratify international treaties.

Aqouri also told Al-Monitor, “It is not the prerogative of the GNA to conclude international treaties. The GNA did not win the confidence of the Libyan government. Parliament is currently considering legal actions to nullify implementation of the agreements in coordination with the stakeholders interested in the situation in Libya and concerned with the maritime agreement, such as Greece, Egypt and Cyprus. We will also address the UN and request the rejection of the treaties' documents. We will also refer to the International Court of Justice if need be."

He expressed concern that the "security agreement will have an impact on Tripoli, as it might open the door for a Turkish military intervention to support the GNA-backed militias."

Libyan writer and political analyst Abdel Hakim Maatouq told Al-Monitor, "These two agreements between Turkey and the GNA are illegal, especially since they are squarely rejected by the Libyan parliament, which accused Sarraj of great treason." He explained that Erdogan “will use these agreements to move his army across the territorial waters of Libya to support the militias in Tripoli.”

Maatouq added, “The naval agreement helps Turkey explore for natural gas and oil and extend its influence in the Mediterranean, especially in Libyan territorial waters. Egypt and the Arab states must withdraw recognition of the GNA to pressure the UN into reconsidering the Skhirat agreement and thereby annul its political legitimacy."