Egypt has conducted extensive military drills in the Mediterranean in a clear response to and a show of strength against the maritime agreement between the Libyan Government of National Accord and Turkey. 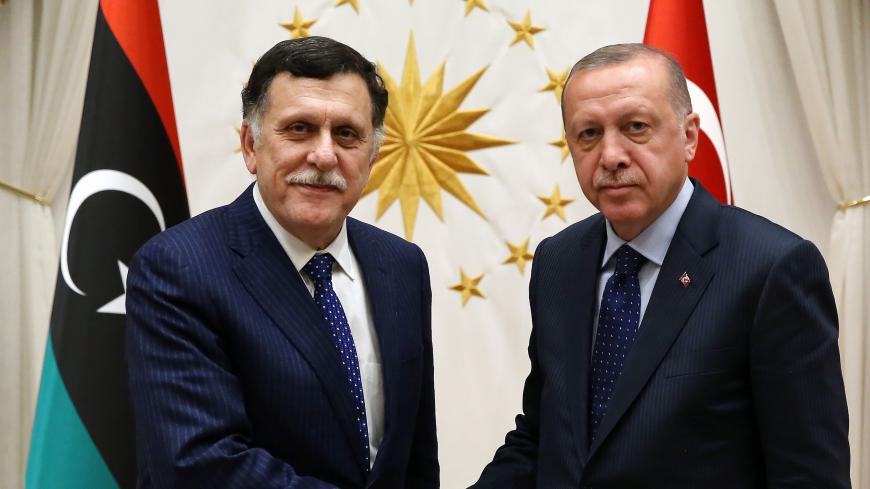 The agreement provides for the expansion of security and military cooperation between the two sides and was condemned by Greece and Egypt.

In a Dec. 11 statement, the Egyptian army said these military exercises come in implementation of an Egyptian military strategy aimed at developing its capabilities in the face of the challenges and risks witnessed in the region. The statement added that the military activities included the launch of a submarine anti-ship Harpoon missile with a range of more than 130 kilometers (81 miles). This is in addition to the combat activities of the Mistral-class amphibious assault ship, a helicopter carrier, in the Mediterranean.

Egypt’s Foreign Ministry condemned the agreement between the GNA and Turkey and said in a Nov. 28 statement that “such agreements are null and lack legal effect, per Article 8 of the Skhirat Agreement between the warring parties in Libya that was signed in 2015 in Morocco under UN auspices. The agreement specified that the GNA has no prerogative to conclude international agreements without referring back to the Libyan parliament.”

The statement added that the agreement will have no effect on the sovereign rights of the riparian states in maritime areas.

Maj. Gen. Gamal Mazloum, an adviser at the Nasser Higher Military Academy, told Al-Monitor via phone that the military drills are certainly connected to the developments unfolding in the region, especially in light of the GNA-Turkey agreement, which has been a concern for countries such as Cyprus, Greece, and Egypt.

“Egypt announced Nov. 29, one day after the agreement, that it had contacted Greece and Cyprus, and the three countries agreed not to recognize the deal, which could affect their energy interests.

He added that the Egyptian military exercises and the use of live ammunition in the Mediterranean send a clear message that Egypt would secure its border and retaliate with a decisive response should there be any interference. “This is Egypt’s right since we are talking about its economic sea area,” Mazloum said.

Mazloum considered the GNA-Turkish agreement to be a threat to Egypt and other countries near Libya. He said tensions in relations between Egypt and Turkey have been ongoing since the protests of June 30, 2013, that led to the toppling of Muslim Brotherhood President Mohammed Morsi. Mazloum said that Turkey had been supporting the Brotherhood, which is classified as a terrorist group in Egypt, and that Ankara had been using its satellite channels to attack Cairo.

In a press statement Nov. 28, the Libyan parliament in Tobruk described the agreement between the Tripoli-based GNA and Turkey as “high treason,” saying that “it aims to provide weapons to terrorist militias and allows Turkey to breach Libyan airspace and territorial waters.”

Turkish President Recep Tayyip Erdogan said Dec. 10 that he was ready to send Turkish soldiers to Libya upon any request from the GNA. On Dec. 19, the GNA accepted a Turkish offer of security and military cooperation, Newsweek reported.

Tariq Fahmy, a professor of politics at Cairo University, told Al-Monitor that the recent regional developments, especially the Turkish-Libyan agreement, raised Egypt’s concerns about any threat to its national security.

The naval forces of Egypt, Greece, and Cyprus conducted Nov. 3 joint military exercises in the Mediterranean, which Fahmy considered to be a message that the three countries were ready to counter any threat against the backdrop of tensions with Turkey over its drilling activities in the area.

He added that Turkey feels that it is outside the equation in the region following the formation of the Eastern Mediterranean Gas Forum by seven countries in January. The forum aims to promote regional energy cooperation.

Fahmy said it is necessary for Egypt to be wary of the recent Turkish-Libyan deal because any redrawing of borders in the region would affect other stakeholders, including Cairo.