Turkey has already made enemies through its maritime exploits in the Mediterranean, and now Egypt is seeking to build international pressure against Ankara's military moves in Libya. 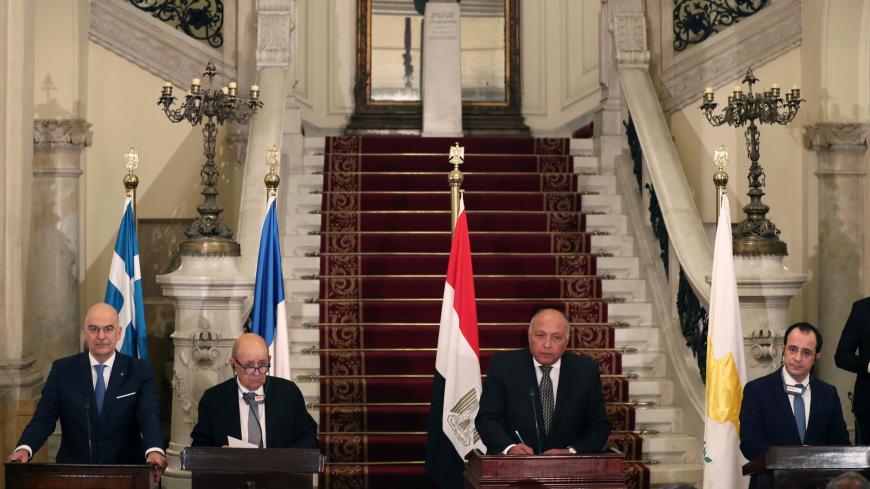 CAIRO — The Libyan crisis and developments in the eastern Mediterranean brought together the foreign affairs ministers of Egypt, France, Greece, Cyprus and Italy in Cairo, as Egypt seeks international mobilization against a Turkish military intervention in Libya.

In Libya's nine-year civil war, Turkey has supported the UN-recognized Government of National Accord (GNA) in Tripoli, headed by Fayez al-Sarraj, against the Libyan National Army, led by eastern military commander Khalifa Hifter. The support is related to another deal in which the GNA agreed to delineate boundaries in the Mediterranean Sea. That deal is designed to help Turkey explore for natural gas and oil, to the chagrin of its coastal neighbors.

By the end of their Jan. 8 meeting, four of the five ministers released a statement declaring both agreements void. Italy’s Foreign Minister Luigi Di Maio did not sign the closing statement, calling it "very unfair" to Turkey and Sarraj. Libya was once an Italian colony; Italy considers it an ally and has significant oil investments there.

The four other ministers affirmed that they will “undertake additional joint efforts to face increasing challenges in the eastern Mediterranean region, at the foremost of which are armed conflict, terrorism and irregular migration.” They emphasized that they oppose the deployment of military troops in Libya, as troops “threaten peace and stability in this region.”

Turkey’s Foreign Ministry rushed to denounce the joint ministerial statement, saying that Ankara's deals with Sarraj are legal, and that Turkey has a right to make decisions on issues that affect it, Anadolu Agency news reported Jan. 9.

Al-Monitor spoke to Egyptian diplomats and analysts who said the ministerial meeting gathered the parties most affected by the escalation in Libya. They added that they seek to act together with all parties to prevent the situation from worsening and to convince warring parties to halt the fighting and resume talks.

On Jan. 13, Russia hosted Sarraj and Hifter — separately — for talks on a cease-fire between the two sides. However, Hifter postponed making an official decision on the pact.

Egyptian President Abdel Fattah al-Sisi spoke Jan. 10 with Russian President Vladimir Putin by phone about the Libyan crisis and the need to focus joint efforts on a political settlement in Libya.

Rakha Hassan, a member of the Egyptian Council for Foreign Affairs, told Al-Monitor, “The crisis in Libya has become extremely complicated, due to past international and regional interference. There is broad interest in said crisis, given its location and oil wealth.”

Hassan explained that all of the parties that attended the ministerial meeting in Cairo have the common goal of settling the Libyan crisis. “It is a matter that is directly correlated to national security for Egypt, as the joint land border [with Libya] stretches around 1,200 kilometers [746 miles],” he stated.

“The agreement on maritime boundaries that [Turkish President Recep Tayyip Erdogan and Sarraj reached] poses a threat to the Greek and Cypriot interests. As for France and Italy, they are preoccupied with the investments, oil supplies and the operation of their companies,” he said. “None of them want to see Libya being destroyed. … Such a European-Egyptian cooperation undoubtedly places pressure on Erdogan.”

Turkey said it has already sent military experts and technical teams to support the GNA, and Erdogan stated Jan. 16 that it was beginning to deploy troops.

Yet Hassan pointed out, “There is collective and significant effort to contain the crisis in Libya and stop the fighting.”

The effort Hassan referred to involves the visit France’s Foreign Affairs Minister Jean-Yves Le Drian made Jan. 9 to Tunisia and his talks with Tunisian President Kais Saied about the Libyan crisis.

Speaking to the press, Le Drian said he and Saied talked about the ministerial meeting Jan. 8 in Cairo and Jan. 7 in Brussels, which European and Egyptian partners held over the escalation in Libya that threatens the region’s stability.

On Jan. 9, Egypt’s Foreign Minister Sameh Shoukry visited Algeria, where he met President Abdelmajid Tebounne. Shoukry told the press following the meeting that the two sides rejected foreign intervention in Libya and agreed to work to prevent any foreign parties from further complicating the crisis.

Ahmed Youssef Ahmed, a political science professor at Cairo University and former dean of the Institute of Arab Research and Studies, told Al-Monitor by phone that the Cairo meeting "and ensuing actions are tantamount to advanced diplomatic coordination between countries that share the same goal."

He continued, “There is hope that the meeting will be translated into practical steps to counter Turkey's illegitimate moves in the Middle East, eastern Mediterranean or Libya, similar to [the outcomes] of the French and Egyptian foreign ministers’ visits."

Khaled Okasha, a retired security expert and member of the Egyptian Center for Strategic Studies, told Al-Monitor, “The [Cairo] meeting is tantamount to an Egyptian mobilization to build a diplomatic and political front with the parties that are closely associated with the Libyan dossier, and that rejected and are directly concerned with the agreement on maritime boundaries between Erdogan and Sarraj, considering it as infringement of their sovereign rights.”

Commenting by phone on the meeting’s impact on the future of the Libyan crisis, Okasha said the meeting “will certainly place pressure on the Turkish government to de-escalate [its position], given that it includes Egypt and three EU countries, including France, a permanent member state of the UN Security Council.” He noted, “That is a form of political and diplomatic pressure to thwart the incursion in Libya."