Algeria grants itself power to intervene in Libya

Although Algeria has long maintained its neutrality on the fighting in neighboring Libya, it has amended its constitution to allow itself to take military action if needed. 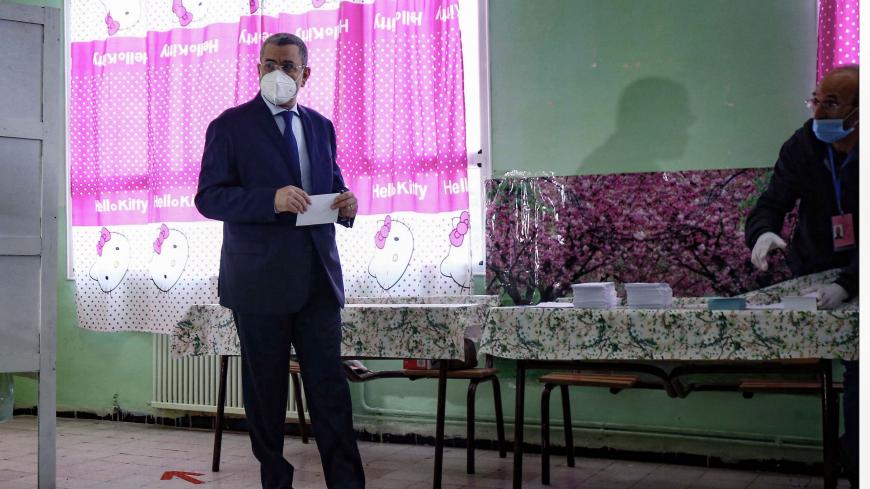 Algerian Prime Minister Abdelmadjid Djerad prepares to cast his ballot at a polling station in the capital Algiers, during a vote for a revised constitution, on Nov. 1, 2020. - AFP via Getty Images

Egyptian President Abdel Fattah al-Sisi unveiled the Cairo Declaration initiative June 6 to end nine years of civil war in neighboring Libya. The plan calls for a cease-fire, an elected presidential council with representatives from Libya’s three regions and an 18-month transition period until elections are held.

“There can be no stability in Libya unless peaceful means to end the crisis are found that include the unity and integrity of the national institutions,” Sisi told a press conference in Cairo, flanked by Libya’s eastern military strongman Khalifa Hifter and the speaker of the Tobruk-based parliament, Aguila Saleh.

Egypt backs Hifter, whose self-styled Libyan National Army is fighting the Tripoli-based Government of National Accord, which in turn is supported by Turkey.

As the Egyptian plan was rejected by the Tripoli-based government and Ankara, Egypt threatened military action in Libya June 20 if Turkey-backed Libyan forces advanced on the oil-rich city of Sirte. The threat has led to a halt of military escalation on the ground, although the two rivals continued their troop buildup on the front lines.

Algeria welcomed the Egyptian peace plan for Libya, saying it supports any effort aimed at ending bloodshed in its eastern neighbor. “We stand at the same distance from all parties because we want to play the role of mediator who seeks to bring the parties together without taking sides,” presidential spokesperson Mohannad Oussaid Belaid said in a statement back in June.

On July 11, Algerian Foreign Minister Sabri Boukadoum said Algeria has been in contact with Egypt to reach a solution to the Libyan crisis. “Some countries have demanded Algeria send its military forces to [Libya] to enforce respect of the cease-fire between the warring rivals, but constitutional constraints have prevented Algeria from responding to these demands,” Boukadoum said in press statements.

The top diplomat added, “Algeria’s interest lies in maintaining Libya’s unity and we don’t have any interest in taking gas or oil from Libya.”

Algeria’s constitution prohibits the military from engaging in conflicts outside the country’s borders. As the fighting raged in Algeria’s next-door neighbor, the presidency proposed constitutional amendments that would lift restrictions on deploying troops on overseas missions. Among the changes is an amendment to Article 29 to allow Algerian military forces to conduct peacekeeping operations outside the country “within the framework of the United Nations, the African Union and the Arab League,” according to a draft of the revisions released by the Algerian presidency in May.

The amendments also grant the president the power to send forces abroad after a two-thirds majority vote by parliament. The changes were approved by Algerian voters in a constitutional referendum held Nov. 1.

“Egypt and Algeria see eye to eye on the need to reach a political solution to the Libyan crisis by the Libyans themselves,” Rakha Ahmed Hassan, a member of the Egyptian Council for Foreign Affairs, told Al-Monitor.

“Cairo and Algiers also agree on the necessity to put an end to foreign meddling in Libya and reject any attempt to build foreign military bases to support one Libyan side against the other,” Hassan said. “The two countries are in full agreement that militias must be dismantled and integrated into the Libyan national army.”

Algerian President Abdelmadjid Tebboune warned Oct. 15 that war-torn Libya risks becoming a new Somalia. “Libya is like a body where cancer has spread and is being treated with sedatives,” Tebboune said during a visit to the Defense Ministry.

Hassan ruled out Algeria intervening militarily in Libya in response to Turkey’s military presence in its oil-rich neighbor, saying, “Algeria maintains good relations with Turkey and officials from both countries are exchanging visits at the highest levels.”

Hassan said Algeria has pursued a policy of neutrality in dealing with the Libyan rivals since the fall of strongman Moammar Gadhafi in 2011. “Algeria did not want to intervene in the Libyan crisis in the interest of preserving its role in the reconstruction process in Libya,” he said.

“If Algeria sees that the Turkish military presence poses a threat to the country’s security, the constitutional amendments will enable them to take all necessary measures to deal with this threat,” Okasha told Al-Monitor. “At the end of the day, the decision to militarily intervene in Libya by Algeria has nothing to do with Egypt and is entirely up to the Algerians.”

Okasha continued, “The Egyptian efforts are focused on bringing the Libyan rivals together to reach a political solution to the Libyan crisis because Egypt is aware that the only guarantee of success is by reaching a political agreement, a goal that Egypt is seeking to achieve.”

“Egypt plays a role in bringing together the Libyan parties and there is no room for the armed militias and mercenaries to be involved in any work related to the Libyan issue,” Shoukry said in a joint press conference with his French counterpart Jean-Yves Le Drian in Cairo.

by Murielle KASPRZAK and Joseph SCHMID | AFP | May 26, 2022
END_OF_DOCUMENT_TOKEN_TO_BE_REPLACED