Egypt and Algeria have been at odds over how to deal with the situation in Libya, but that may be changing. 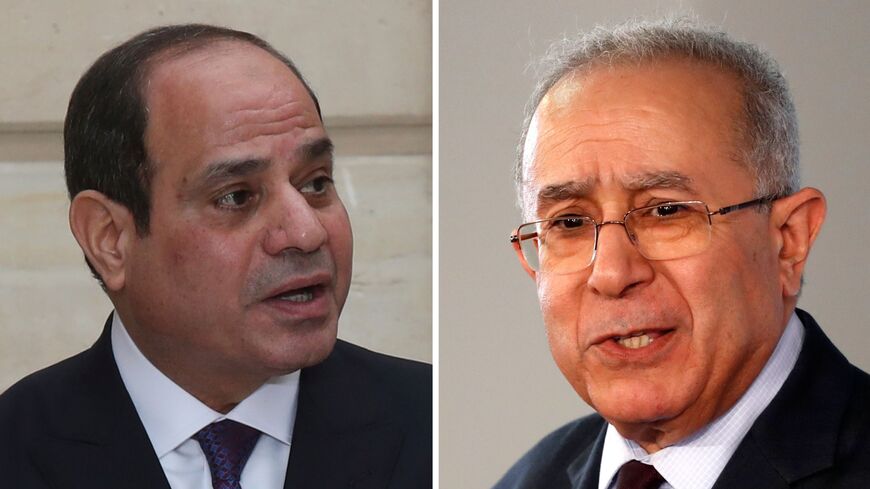 Egyptian President Abdel Fattah al-Sisi (L) and Algerian Foreign Minister Ramtane Lamamra met on Aug. 1, 2021, in Cairo. Here, Sisi speaks during a press conference at the Elysee presidential palace on Dec. 7, 2020, in Paris, while Lamamra speaks during a press conference in Berlin on March 20, 2019, when he was vice prime minister. - MICHEL EULER/POOL (L) / ODD ANDERSEN/AFP (R) AFP via Getty Images

Egypt and Algeria are planning to boost their coordination on the situation in neighboring Libya, where efforts to hold parliamentary and presidential elections later this year appear to have reached an impasse.

A presidential statement said the two sides saw eye to eye on enhancing Egyptian-Algerian coordination “to enforce the will of the Libyan people through backing Libyan institutions and supporting current efforts to achieve security and stability and maintain Libya’s territorial integrity and sovereignty.”

Egyptian Foreign Minister Sameh Shoukry said turmoil in Libya had a negative impact on both Egypt and Algeria. He added in a press conference with his Algerian counterpart that the two countries back efforts to hold Libyan elections on time in December to help restore stability to Libya and expel foreign forces and terrorist militias from the country.

Lamamra said Algeria and Egypt, as Libya’s neighbors, have a “special responsibility” to help restore stability to the North African nation. The Algerian minister said he conveyed a message from Algerian President Abdelmadjid Tebboune to the Egyptian leader on the need to bolster cooperation and historic relations between Algeria and Egypt.

“There are challenges and problems that require patience, vigilance and supporting Libyan legitimacy to help draw Libya out of this tragic phase,” Lamamra said.

Egypt and Algeria have long borders with Libya. The two countries have struggled since the ouster and subsequent death of Libyan strongman Moammar Gadhafi in 2011 to contain militants and brigades of former rebels and militias.

Libya was divided beginning in 2014 between an internationally recognized government in Tripoli and a rival administration based in eastern Libya. A UN-led peace process led to a cease-fire between the country’s warring rivals last year and a unity government was formed in February and approved by parliament in March to lead the war-torn nation to Dec. 24 elections.

Egypt and Algeria have been at odds over how to deal with the situation in Libya. While Egypt, along with the United Arab Emirates and France, backed the Libyan National Army of commander Khalifa Hifter, Algeria opposed the eastern commander, whose forces launched an offensive in 2019 to capture the capital, Tripoli, from the Government of National Accord. That attack was repelled by Turkey-backed Government of National Accord forces.

Haridy said Hifter’s attack on Tripoli in 2019 has “mixed the cards” and weakened coordination between Egypt, Algeria and Tunisia on the Libyan crisis.

“But after the Berlin conference in January 2020 and the launch of Libya’s political process, the positions of both Egypt and Algeria have become identical regarding the situation in Libya,” he said.

Jalel Harchaoui, a senior fellow at the Geneva-based Global Initiative against Transnational Organized Crime and an expert on North Africa, said Algeria was seen as pro-Turkey by Libya actors such as the UAE.

He said in January 2020, Turkish President Recep Tayyip Erdogan sought to obtain permission from Algeria to use its territory for the purpose of intervening militarily in Libya, a request rejected by Algeria.

“Abu Dhabi, however, was still extremely angry at the Algerians because they did not actively protest, hinder or block Turkey’s Libya adventure. From there, the UAE considered Algiers a complacent accomplice of Erdogan,” Harchaoui told Al-Monitor.

In June, Tebboune said Algiers was ready to intervene to stop Tripoli’s fall into the hands of Hifter’s forces.

"We do not accept that the capital of a Maghreb country is occupied by mercenaries. We were going to intervene," Tebboune said in an interview with Qatar-based Al Jazeera television.

Asked whether it would have been a military intervention, Tebboune said Algeria would have intervened in one "way or another: We were not going to sit back and do nothing."

Egypt blacklisted the Brotherhood in 2013, accusing the Islamist group of inciting violence.

Tebboune said that “for domestic reasons having to do with the legislative elections, and his bet fell flat. It was a clear mistake,” Harchaoui said.

Presidential and parliamentary elections in Libya are seen as a critical step in efforts to bring the oil-rich country to stability, but concerns have been growing in recent weeks that the voting would be postponed amid a dispute between the country’s rivals on the legal and constitutional frameworks for the contest.

Last month, Libyan parliament Speaker Aguila Saleh warned that any delay of the polls will put Libya back to “square one” of post-Gadhafi turmoil.

"If the elections are delayed, we will go back to square one," Saleh told Reuters, going on to accuse the national unity government of failing to unify Libya’s institutions.

Last month, Tebboune met with the head of Libya’s Presidency Council, Mohamed Menfi, during which he offered “absolute support” to Libya.

“It is important to understand that a big part of the security establishment in Algiers mistrusts Turkey and opposes all forms of political Islam,” Harchaoui said.

“Lamamra, Algeria’s senior, seasoned, charismatic foreign minister, is arguably closer to that milieu. By reaching out to Egypt and Tunisia, he is pursuing a rather conservative path on behalf of an important faction in Algeria's power.”