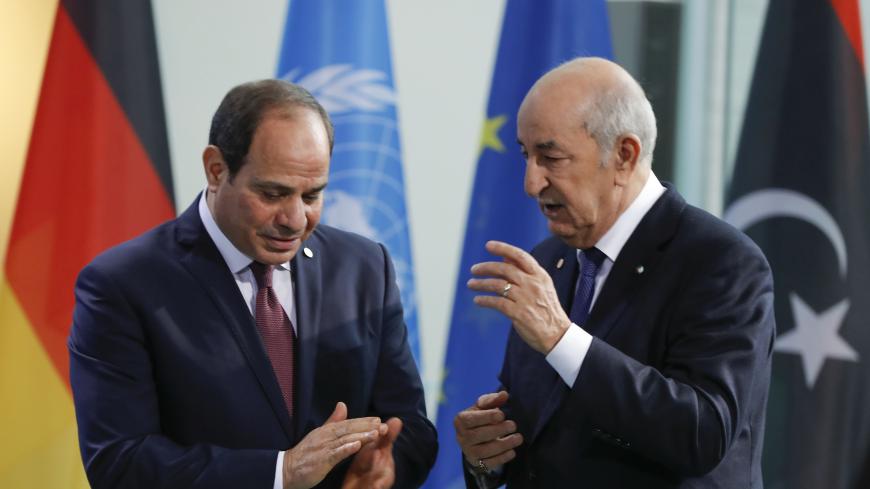 Libya’s chaos has endured for nine years. As various governments and international peace initiatives have come and gone, arms — already in plentiful supply before 2011 — have flooded the country and, from there, made their way across the region, fueling unrest and exacerbating existing conflicts.

Almost from the opening shots of 2011, Libya’s war has been defined by the competing interests of regional and international powers, often at the expense of local ones who have borne much of the brunt of Libyan instability.

Now, as Russia and Turkey jockey for dominant roles within Libya’s fractured landscape, regional actors again find themselves sidelined. Tunisia, a neighbor of both Libya and Algeria whose internal security situation has been undermined by the terror camps that flourished in Libya’s chaos, was only invited at the last minute to the Jan. 19 peace conference in Berlin, an invitation it ultimately refused. Algeria, long one of the dominant actors within North Africa and historically a prime mover within the various peace processes, finds itself struggling to regain lost ground after months of internal uncertainty.

“Algeria's ability to weigh on the Libyan crisis has been severely undermined by domestic instability over the past year,” Riccardo Fabiani, North Africa Project director for the Crisis Group, told Al-Monitor. “Only since the election of the new president, Abdelmadjid Tebboune, Algeria has been able to pursue a coherent and audible policy on Libya. Indeed, after the visit of Turkey's foreign minister in early January and his attempt to convince Algeria to bless and provide support to Ankara's operation, Tebboune publicly called Tripoli ‘a red line,’ affirming that Algeria is against any form of foreign interference and wants to find a peaceful solution to the current crisis [in Libya].”

During his swearing-in ceremony in mid-December, Tebboune made his priorities abundantly clear, telling his audience, "Algeria is the first and foremost country concerned by Libya's stability, whether one likes it or not. Algeria will never accept being excluded from the proposed solutions to the Libyan crisis."

That some kind of solution is vital to Algeria is indisputable. The cost of policing Algeria’s 1,000-kilometer (621-mile) border with its eastern neighbor, once estimated to cost Algiers $500 million per year, increased following Turkey’s announcement in mid-December that it would be deploying troops and its Syrian militias to the conflict as fears of spillover from any proxy war grew.

Concern over foreign interference in Libya has been a main element of Algeria’s foreign policy positioning. From the conflict’s outset in March 2011, Algiers was one of the few member countries to oppose the Arab League’s call for Western military intervention against Libyan dictator Moammar Gadhafi. Further foreign involvement has caused equal disquiet.

Moreover, despite its role in establishing the UN-backed government in Tripoli, now one of the principal parties in Libya’s civil war, Algeria has maintained a relatively neutral stance within Libya’s internal anarchy. This is something Tebboune underscored in his opening address to the Libya conference in Berlin on Jan. 19, when he urged a Libyan dialogue between all the warring parties.

“All kinds of foreign interventions in the region are anathema to Algeria, which has always opposed all forms of interference in its domestic as well as regional affairs. Algeria is opposed to any use of military force in Libya, whether it comes from Turkey or Russia,” Fabiani said.

However, while Algeria’s position may be emblematic of many of Libya’s immediate neighbors, not least Tunisia, the geopolitical ambitions in Moscow and Ankara are now driving developments on the ground. In late 2019, Russia is reported to have dispatched hundreds of fighters from its privately contracted Wagner group to support the faltering attempts of eastern Field Marshal Khalifa Hifter to take Tripoli. Responding in December, Turkey increased its support for the UN-backed government, dispatching up to 2,000 fighters from its allied Syrian militias to support the government in Tripoli.

Yahia Zoubir, a visiting fellow at the Brookings Center in Doha, Qatar, said Algiers does not have an overt "preference either for Russia or Turkey. It sees foreign presence in general as aggravating the chaos in Libya.” He added, “Algiers does not appreciate the support of France, Egypt, the United Arab Emirates and Russia to Hifter either. What Algiers seeks is to have a role in bringing about a solution. For domestic reasons, the authorities wish to show that unlike what had happened under [former Algerian president Abdelaziz] Bouteflika, Algeria now is an actor to reckon with.”

Zoubir also told Al-Monitor that if it came down to a choice between one or the other, Algerian officials might favor Russia as “Turkey is a NATO member whose policies Algerians detest. They view negatively Turkey’s relations and military cooperation with Israel. There is consensus between the authorities and the population, including the hirak (the Algerian anti-government protest movement), on this point." Zoubir said authorities also worry about the influence Turkey could have on Tunisia, which depends on Algeria and has been staying neutral, and in the Sahel. He said officials are even more worried about a potential military confrontation between Turkey on the one hand and Egypt and the United Arab Emirates on the other, and that "a generalized war in Libya could have a spillover effect in the entire Maghreb-Sahel region with which Algeria shares borders.”

He said an additional consideration, though potentially not as critical, was the expanded influence of the Muslim Brotherhood that any Turkish deployment could bring; this would be viewed in Algiers as a potentially further destabilizing influence within the North African tumult. “Turkey supported the so-called ‘Arab Spring’ and the coming to power of the Muslim Brotherhood in Egypt and Tunisia, even if Algiers and Ennahda have excellent relations. In sum, they see Turkey as a destabilizing actor in the region.”

Finally, there are the long-standing relations between Moscow and Algeria; Algiers is an established importer of Russian military hardware. There also is the matter of political ties with Moscow; the two countries are often aligned in their views on world affairs. “Algerians also know that Moscow values its relations with Algiers and would not seek to undertake actions that might undermine Algeria’s core interests,” Zoubir said.

Despite Algeria's best efforts, nine years of conflict have essentially now brought an international proxy war to Algiers' doorstep. While its support for any peace process may prove critical, it appears that there is little Algiers can do to stifle the international competition for dominance within Libya's chaos.