Algeria is seeking to recover its diplomatic role in the region, by pushing for a political solution in Libya and condemning foreign interference in its affairs. 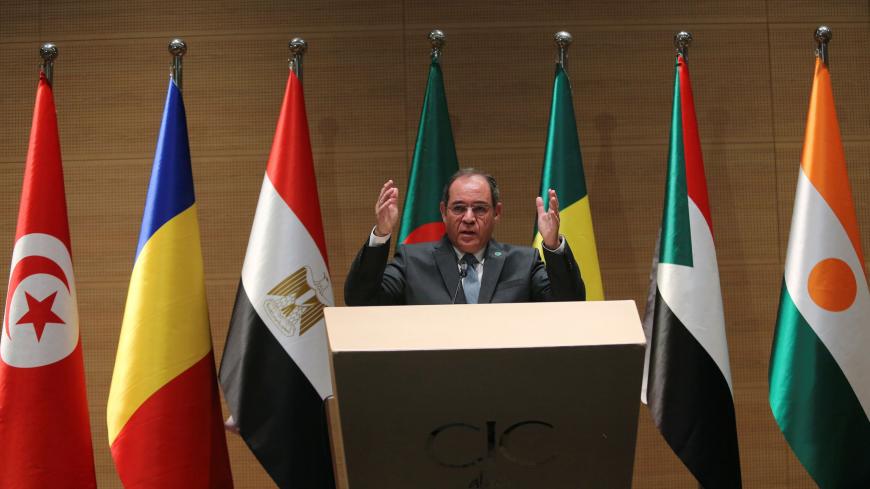 Algerian Foreign Minister Sabri Boukadoum speaks during a news conference after a meeting with foreign ministers and officials from countries neighboring Libya to discuss the conflict in Libya, in Algiers, Algeria, Jan. 23, 2020. - REUTERS/Ramzi Boudina

Algeria is continuing to bring its historic diplomatic weight to bear on international attempts to stabilize Libya. However, despite Algeria's best efforts, the supply of international arms and fighters to Libya's warring parties continues apace, with the international community locked inside a venomous circle of accusation and counter-accusation.

After a period of relative absence, Algeria is keen to regain its role as a leader within the region's tangled political networks. Bolstered by the election of its new president, Abdelmadjid Tebboune, in December, Algiers has been striving to reassert its presence in efforts to bring Libya’s warring parties together and stem the growing presence of proxy forces massing beyond Algeria's eastern border.

From its experience as a French colony, through its brutal war for independence onward, Algeria has maintained a dogged fixation with the primacy of sovereignty and the dangers of intervention in other country’s affairs, concerns it has consistently seen ignored in Libya, from NATO’s intervention in 2011 to the chaos of the present.

“Algeria has a strong ideological commitment against any form of foreign interference in its own and in regional affairs,” Riccardo Fabiani, North Africa Project director for the Crisis Group, told Al-Monitor. “This is backed up by how badly foreign military interventions have gone over the past years, with 2011 in Libya being a strong example of the negative repercussions. This kind of event has only reinforced Algeria's perception that foreign states can only make the conflict worse by intervening directly.”

“Inevitably, Algeria sharing a long border with Libya, the thinking in Algiers is that an intensification in the war in Libya will have repercussions on its domestic security as well,” Fabiani said.

By almost any measure, Algeria’s efforts to secure a political inter-Libyan deal free from foreign interference have not been a success. On Jan. 29, French President Emmanuel Macron angrily accused Turkey of deploying its allied militias from Syria, along with warships, to the region in support of the embattled UN-backed government in Tripoli, without mentioning a larger deployment of arms that had been made to eastern Libya by other nations. Ankara maintains that its warships are present to support NATO operations within the Mediterranean and are anchored within international waters. Qatar and Italy are also supporting the government in Tripoli, though to a lesser degree.

In the east, the United Arab Emirates, Egypt, Jordan, Sudanese and Chadian fighters and Russian mercenaries from the Wagner Group are all backing the anti-government so-called Libyan National Army, with limited support alleged to be coming from France.

The embargo on international arms supplies to Libya’s warring parties, which was reasserted in Berlin in mid-January, is unraveling, and the strength of the international proxy forces continues to grow.

However, despite increased fighting, Algeria does seem to be making some headway. In the wake of the Berlin conference, Algeria assembled the foreign ministers of Egypt, Tunisia, Sudan, Chad, Mali and Niger to attempt to hammer out some kind of regional consensus. Morocco did not attend. Most recently, Algeria suggested to the African Union that it should play host to a forum of national reconciliation that would at least explore the possibility of compromise between the Libyan factions.

However, although Algeria appears to have arrived at the party, it does so in a weakened condition. Algeria’s attempts to establish any kind of consensus are inevitably hampered by its own regional rivalries. First, there is Algeria's competition with its longstanding foe, Morocco, which assumed a leading role in 2015 by proving instrumental in founding the Skhirat Agreement that led to the establishment of the UN government in Tripoli. Second, there is Algeria's rivalry with Egypt, which has been supporting the eastern forces within Libya and gas been a longstanding competitor of Algeria for regional dominance.

Domestically too, Algeria arrives enfeebled. Years of former President Abdelaziz Bouteflika’s infirmity saw the country lose much of the diplomatic heft it had previously exerted over the region. This and the massive protests that engulfed the country in 2019 and effectively drew much of Algeria to a standstill did little to help Algiers' foreign policy focus.

However, beyond the short term, more fundamental problems apply. “Algeria has always enjoyed significant international diplomatic respect,” Willam Lawrence, who teaches political science and international affairs at American University’s School of International Service in Washington, told Al-Monitor. Algerians “were leaders in the postcolonial nonaligned movement and helped end wars and release hostages." Lawrence said Algerians served as the right-hand men of Kofi Annan when he was UN secretary-general. Lawrence added, "When I used to visit the UN, it seemed every other office had an Algerian in it. Algerian diplomats have always been known for their capacity to analyze a situation and for their access to back channels.”

However, Lawrence said, the exodus of some of the country’s best and brightest during the carnage of Algeria’s civil war in the 1990s “created a sort of hourglass shape within Algeria’s bureaucracies, including its Foreign Ministry, where you have the older generation providing leadership at the top, and a younger group of … enthusiasts below. However, the middle group, who might normally effectively enact policy, are relatively thin on the ground.” He said this gap extended to almost every strata of Algerian public life, from the army to industry.

“Right now, Algeria's priorities need to be to restore coordination on Libya with Morocco and Egypt, which will allow it to play the regional role they need to before they can play a more effective international one,” Lawrence continued. “Essentially, they’ll need to do what they’re good at, bringing people to the table."

“Nearly every external player in the Libyan conflict has chosen sides at some point. Only Algeria, Morocco and Tunisia have remained assiduously neutral. This gives Algeria a better position to influence the outcome. Do they have the capacity to bring all sides together? Maybe not,” he said, while adding that as “everyone else involved in the current peace processes, from Germany to the UK, is politically weak right now, Algeria could still play a critical role.”