Libyan Prime Minister Fayez al-Sarraj is reportedly planning to resign from his post and take on a caretaker role in the Tripoli government, a move that could complicate prior agreements with Ankara and raises questions over future bilateral ties. 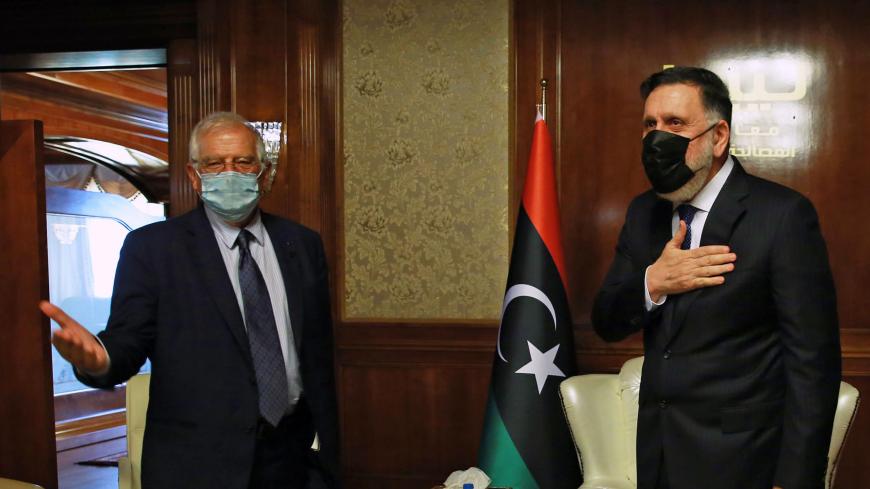 ISTANBUL – A recent spat of protests in western Libya and infighting within Tripoli’s UN-recognized Government of National Accord (GNA) has put pressure on Libyan Prime Minister Fayez al-Sarraj, who is expected to announce his resignation this week and assume a caretaker role over government functions, according to a Bloomberg report Tuesday.

The news comes after a Turkish military intervention helped break a 14-month siege on Tripoli by eastern Libyan forces loyal to commander Khalifa Hifter in June, and now raises questions over the prior and future accords between Ankara and Tripoli.

In November 2019, Sarraj signed a controversial agreement with Ankara delineating a shared maritime boundary in the eastern Mediterranean Sea in an area claimed by Greece. Ankara has since used the agreement as a basis to conduct gas exploration activities in contested waters, raising tensions between Turkey and several European nations in recent months.

If reports of Sarraj’s pending resignation prove true, the maritime accord along with other points of Ankara-Tripoli cooperation may be complicated by turmoil in the Libyan political sphere.

“Turkey has only one piece of paper regarding that maritime accord and it happens to [bear] Sarraj’s name,” Jalel Harchaoui, a research fellow at the Clingendael Institute who focuses on Libya, told Al-Monitor.

He added, “If people keep pushing, which I believe is one of the reasons Sarraj is using this moment to signal to the world he is interested in leaving at some future date, then Turkey better have a plan.”

The infighting in Tripoli comes after advances by GNA forces came to a stalemate in June along the current Sirte-Jufra front line in central Libya. With few developments between the warring sides and repeated attempts to secure a ceasefire, some clashes broke out among militias within the GNA, highlighting ongoing instability in western Libyan territories reclaimed from Hifter’s Libyan National Army.

In late August, protesters took the streets in Misrata, al-Zawiya and Tripoli to demonstrate against government corruption and deteriorating living conditions under frequent electricity and water cuts. Following domestic tensions that led to round-the-clock lockdowns, Sarraj suspended GNA Interior Minister Fathi Bashagha while he was visiting Turkey, though later reinstated Bashagha to his role.

The public rift highlighted discord within the GNA ahead of negotiations in Geneva next month that will seek to lay the groundwork for a new governing structure in Libya. Analysts said Sarraj’s rumored shift to a caretaker capacity may be an attempt to fulfill governing duties without completely relinquishing state power as political leaders prepare for a general election as well as a constitutional referendum in the coming 18 months.

“It is true that Sarraj has been weakened considerably following his spat with Bashagha and that he is currently up against increasingly overt opposition in Tripoli,” Alison Pargeter, a senior research fellow at King’s College London’s School of Security Studies, told Al-Monitor. “However, that does not necessarily mean he is ready to give it all up just yet.”

She noted that Sarraj's resignation would risk creating a political vacuum in western Libya that would further weaken and undermine the Presidency Council and the GNA. The move could also be detrimental to Tripoli-Ankara ties.

“While Ankara has plenty of other partners in Libya, including Bashagha, it is Sarraj in his capacity as head of an internationally recognized ruling body who has provided Turkey with legitimate cover for its actions in Libya and the Mediterranean,” Pargeter told Al-Monitor.

Emadeddin Badi, a nonresident senior fellow with the Middle East Program at the Atlantic Council, said the news of Sarraj’s resignation could be true but would have limited impact on current developments.

“It was already clear that the outcome of the Geneva talks would most likely lead to the formation of a new political entity, one that Sarraj would most likely not be part of,” Badi told Al-Monitor. “The potential resignation now only cements that reality.”

The resulting power vacuum would not only raise questions over Ankara’s ongoing intervention in the country, but also the economic cooperation between Turkey’s private sector and Libyan entities. Before the Libyan war began in 2011, Turkish companies had more than $18 billion in contracts in the nation, according to the Turkish Contractors Association. These companies also seek to collect billions of dollars in debts left unpaid as a result of the nine-year conflict.

A memorandum of understanding signed between the Turkish and Libyan central banks in August to increase cooperation could also be subject to future turmoil, Harchaoui said.

The developments come as Turkish and Russian officials meet in Ankara for technical talks Sept. 15 and 16 to discuss developments in Syria and Libya. With many uncertainties ahead, Harchaoui said Turkey’s position in Libya remains “delicate.”

“Maybe Turkey has a beautiful plan,” Harchaoui told Al-Monitor. “Maybe it has worked out every detail with Russia and knows exactly what to do — or it’s gradually losing control over this super complex thing called Libyan politics.”