Egypt and Libya recently signed an agreement to cooperate on screening Egyptian laborers so more of them can enter Libya as the security situation is gradually improving. 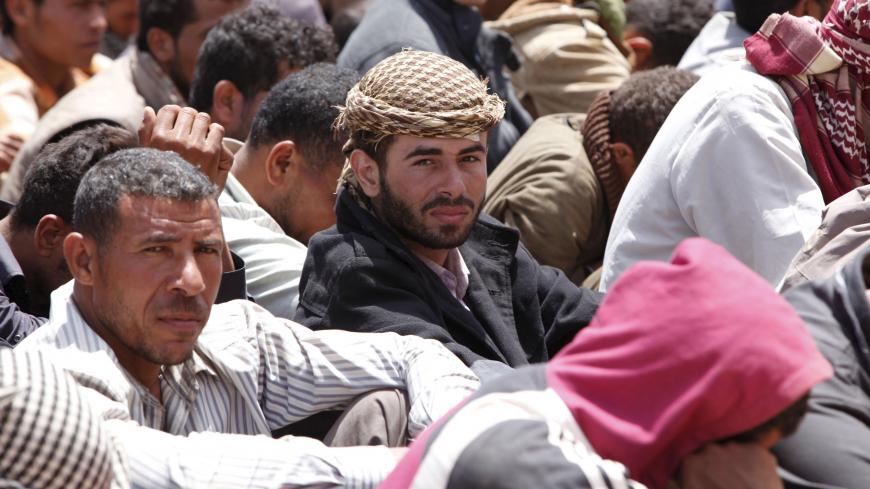 Egyptian migrants sit at an immigration center in Misrata, Libya, May 10, 2015. - REUTERS/Ismail Zitouny

CAIRO — Egyptian and Libyan security authorities have agreed to coordinate Egyptian laborers' entry to Libya by opening offices in the border cities of Sallum, Egypt, and Masaed, Libya. The agreement comes in anticipation of Libya's reconstruction in the aftermath of the 2011 revolution, years of civil war and the resulting chaos that opened the door to the Islamic State (IS) in 2015.

Under the agreement signed March 17, Egyptian laborers will undergo security clearance by Egyptian agencies (which were not identified) affiliated with the police or army. Then in Libya, the Interior Ministry of the interim government will be responsible for security clearances for workers to enter that country.

On March 7, the Libyan-Egyptian Joint Economic Chamber organized its second economic forum in Alexandria to discuss ways to overcome obstacles to trade and people’s movement between the countries. The forum underlined the need to work on returning Egyptian laborers to Libya and to extend invitations to some Egyptian businessmen and companies to visit. During his speech at the forum, Federation of Egyptian Chambers of Commerce head Ahmed al-Wakil called for allowing the return to Libya of a vast number of more than 2 million Egyptians who had worked there before the 2011 revolution, many of whom returned to Egypt because of the political and security instability in Libya.

Egypt had completely banned travel to Libya since February 2015 because of the danger. But as security improved, parliament member Mahdi al-Umda called in January for reopening the Sallum land crossing to Egyptian laborers.

The new agreement is a good move in that direction, said Mohammad Fathi al-Sherif, a researcher at the media center of the Arab League's Permanent Mission of Libya. “The agreement has security and organizational aspects, and this is a key preliminary step for the return of Egyptian labor to Libya," he told Al-Monitor. "Both countries have the political willingness to make it work.”

Haitham Saad al-Din, a spokesman for the Egyptian Ministry of Labor, told Al-Monitor by phone that the agreement involves the countries' security forces, and that the civilian part of the Egyptian government has nothing to do with the pact. He emphasized, however, that a stable security situation in Libya is key to the return of Egyptian laborers.

Ayman Zuhri, head of the Egyptian Society for Migration Studies and a migration professor at the American University of Cairo, told Al-Monitor, “Egyptian labor is the best option for the Libyan market, given the countries' geographic proximity. Besides, skilled and junior Egyptian labor is available at low wages, compared with labor from other countries.”

He added, “Egyptian workers are the primary candidates for the Libyan market currently. The number of Egyptian laborers is expected to return to pre-2011 figures, when there were around 1.7 million in Libya." He estimated the current number at 300,000 at most, while saying official figures are lacking and some workers cross illegally.

Libyan Minister of Work and Rehabilitation Al-Mahdi al-Amen told the Egyptian Al-Akhbar newspaper in April that Egyptian laborers will have priority over those of other nationalities in the coming Libyan reconstruction because of their professional capacities and skills, which were evident in Libya before 2011.

Khaled al-Shafei, director of the Capital Center for Economic Studies and Research, told Al-Monitor, “Egyptian companies specializing in construction have experience in such reconstruction. They will play a major role in the coming phase, alongside the expected rise in [general] demand for Egyptian labor that is widely welcomed in the Libyan market.”

Shafei said the labor coordination agreement is essential and "will definitely have a positive impact on the national economy because it will add to the hard currency of the Egyptian Central Bank.”

According to the Egyptian Central Bank, overall remittances of Egyptian laborers abroad rose in 2018 to $25.5 billion, up 3.1% from 2017. The remittances are the largest source of hard currency in the Egyptian economy.

Mohammad Abou Yassine, who worked in Libya from 2012 until 2016, told Al-Monitor, “I worked in construction in Benghazi city. Unfortunately, I didn't continue my work there, since I was injured on the job and had to return to Egypt. I didn't have medical insurance in Libya because I crossed the border illegally.”

He added, “Many Egyptian young people want to travel to Libya for work, since opportunities are available for them there and they have priority over others in the Libyan market.”

Job opportunities in Egypt are scarce.

Mohammad Ali, an Egyptian in his 20s with a bachelor's degree in commerce from the University of Cairo, is waiting for his chance to work in Libya, but he insists on using the proper channels. He told Al-Monitor, “I want to work in Libya legally, and I want a good job opportunity. I choose Libya because it is close to Egypt.”

Ali said that the security situation in Libya has improved and that there would be better than life in Egypt without work. The agreement is important, he said, because it reopens the door to legal travel to Libya after years of travel bans and illegal smuggling.

Mahmoud al-Lahouni, who is currently unemployed, told Al-Monitor by phone, “I worked in Libya from 2008 until 2011, when I returned to Egypt after the deterioration of the security situation. I am currently getting ready to travel again to Libya, amid the relatively improving security situation.”

He added, “There aren't enough jobs available in Egypt. Libya is a good option, and I'm getting ready with some friends to travel there."