Libya rejects Egyptian claims that jihadists are sneaking through its border, instead accusing remnants of the Gadhafi regime of causing its instability. 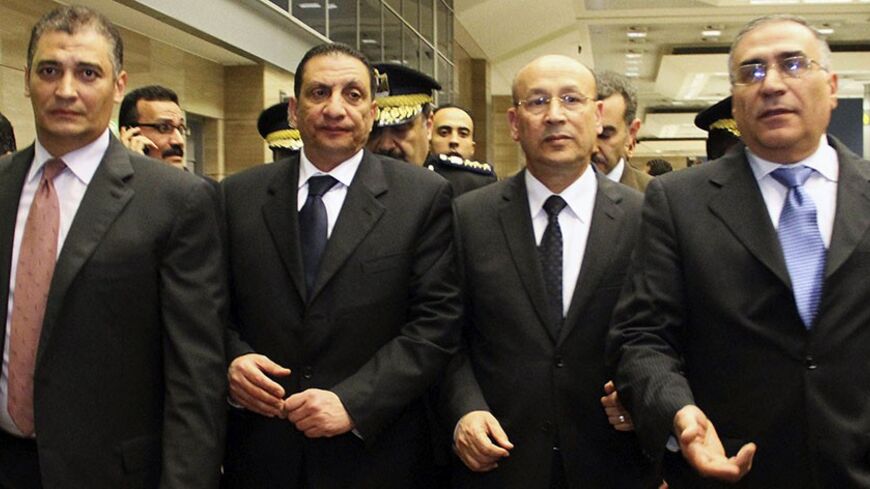 Kidnapped Egyptian diplomats who were released in Libya are accompanied by Egyptian officials as they arrive at Cairo's airport, Jan. 27, 2014. - REUTERS/Al Youm Al Saabi Newspaper

CAIRO — Terror attacks in Egypt have shone a spotlight on the Egyptian-Libyan border, a top priority in recent discussions between the two states. The discussions have broached potential cooperation to prevent the infiltration of Libyan jihadists and arms smuggling to Egypt.

An Egyptian diplomatic source asserted in an interview with Al-Monitor that the talks between Libyan Prime Minister Ali Zeidan, who was ousted from his post today, and Egyptian officials during Zeidan's Jan. 31 visit to Cairo focused on the border issue and extraditing members of deposed Libyan leader Moammar Gadhafi’s regime. The source added that Zeidan requested direct support and prompt cooperation from Egypt to resolve these issues.

“We did not obtain any guarantees or commitments from Zeidan to enforce Libyan control on the borders. But we understand the weight of the security challenges faced by the Libyan government, and the consequences of any step to be taken by Egypt must be tackled in light of the continued threat against the Egyptian community in Libya," said the source, who attended Zeidan’s meetings in Cairo.

Zeidan had made a surprise visit to Cairo early on Jan. 31, following the abduction of members of the Egyptian Embassy in Tripoli in response to the arrest of the chief of the Libyan Revolutionary Operations Chamber, Abu Obeida al-Libi, in Cairo.

Egypt has expressed concern about the lack of control on the western border with Libya. During the Ministerial Conference on International Support to Libya, held in Rome on March 6, Egyptian Foreign Minister Nabil Fahmy declared that in mid-2014, Egypt will host an international conference on controlling Libya’s borders, which are being exploited by terrorist groups and organized gangs.

An Egyptian security source told Al-Monitor, “New elements of the Libyan army have been trained in Cairo over the past year to work as border guards, within the scope of an agreement on military training and rehabilitation by the Egyptian army.”

But the source, who preferred to remain anonymous, confirmed the ongoing disagreement between the Libyan and Egyptian sides about the nature of the threat on the border and said, “The Libyan side always asserts that those involved in smuggling operations are the men and remnants of Gadhafi’s regime, while Egyptian security reports indicate the involvement of jihadists and Islamists in violent acts, according to the investigations conducted by the Egyptian National Security Agency.”

“It was revealed that these jihadists are involved in the terrorist bombings of foreign embassies in Libya, as they have formed militias, controlled weapons warehouses and made contacts with al-Qaeda in the Arab and Muslim Maghreb.”

According to Egyptian security reports circulating in the media, a number of jihadists and extremists involved in violence in Cairo were caught trying to escape to Libya. The reports also indicated that some jihadist groups organized a military parade in Libyan cities on the border with Egypt, showing off their heavy weaponry.

In an interview with Al-Monitor, the Libyan ambassador to Cairo, Mohammed Fayez Jibril, put the focus on remnants of Gadhafi’s regime, accusing them of causing problems on the border. He said, “We know full well that the recent violence in Egypt comes from abroad. But we are convinced that Col. Gadhafi’s men are the main [parties] responsible for this violence, as they are seeking to turn Cairo into a safe haven for them.”

The Libyan envoy ruled out the jihadist Ansar al-Sharia’s involvement in the recent violence against Egyptians in Libya.

“Ansar al-Sharia are part of the political process in Libya. They are not part of these crimes. Elements affiliated with Gadhafi, however, can grow beards to deceive others and make it look like the operation was orchestrated by Islamist groups, knowing that the Gadhafi regime was the sponsor of most of the terrorist groups in Africa,” he said, citing Libyan security investigations.

On Feb. 21, seven Egyptian Christians were killed in one of the suburbs of Benghazi in eastern Libya. Another Christian worker was killed in the same city on March 2, and investigations failed to collect any information about those involved in these incidents. The Egyptian prosecutor called on the Libyan judiciary to investigate the killing of the eight Egyptians.

The source warned against Cairo continuing to host Gadhafi’s men, saying, “These elements are the real danger to Egyptian-Libyan relations, and there are many legal proceedings that have started to hand these over to the Libyan judiciary.”

Abdel Halim Mahjoub, a strategic expert in Arab affairs, believes that there are several issues to be tackled to find a solution to the border problems between Egypt and Libya. First, he mentioned the situation of extremist groups on the Libyan arena and their relationship to the events occurring in Egypt. He also pointed out that the Western intervention in Libya led to the toppling of the Gadhafi regime, leaving the country vulnerable to internal disagreements between the Libyan tribes. Add to this the challenges faced by the Libyan political administration in state-building and the development of the constitution amid the continuous attempts to disrupt the political process.

“Extremist groups in Libya seek to cross the borders to find unstable environments where they can carry out and expand their activities,” he explained. “The creation of these activity centers began with the start of the Libyan revolution, when armed elements fought in the revolution alongside militias. These extremist groups are still insisting, to this day, on building their own entity that collides with the structure of the state,” Mahjoub told Al-Monitor.

Mahjoub said, “Controlling the Libyan-Egyptian border may be a very difficult task,” but he stressed the need for Egypt to take action to resolve this crisis that is directly threatening Egypt's national security.

He added that Egypt can help control the border “by contributing to the control of the internal security in Libya. Egypt should also not give way to calls for Libya’s partition, while at the same time building and strengthening Libyan state institutions. These actions need to be taken without waiting for stability to reign, an issue that may later become a long-term goal for both Egypt and Libya.”

The attempts of the two states to control the borders and deal with the proliferation of armed jihadist and extremist elements on border areas rely on the ability of the respective security apparatuses of both states. Both countries' security forces are exhausted by the endless series of terrorist operations, whose real perpetrators are yet to be found.