Increasing operations by militants in Egypt's Western Desert have led to personnel changes in the military and security forces. 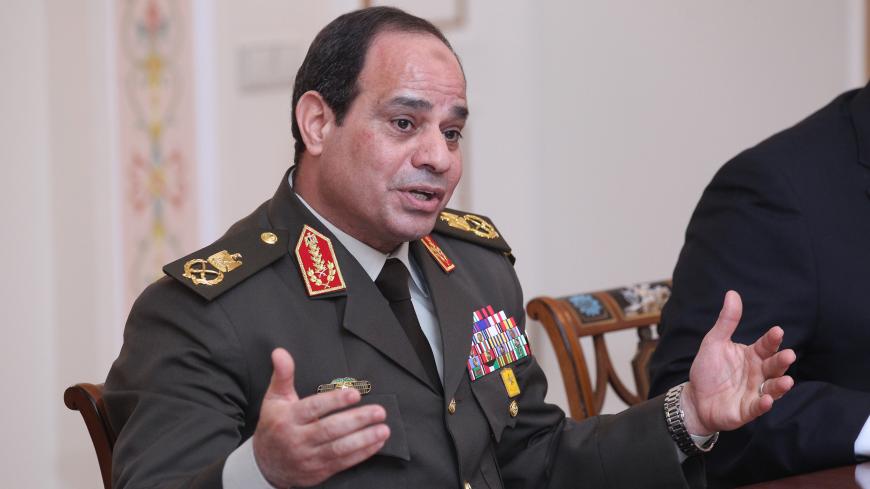 CAIRO — Egyptian President Abdel Fattah al-Sisi on Dec. 23 dismissed Maj. Gen. Mohamed al-Shahat from his post as director of Military Intelligence after three years on the job and appointed Maj. Gen. Khaled Megawer as his successor. Megawer had previously served as deputy director of Military Intelligence, Second Field Army commander and military attache at the Egyptian Embassy in the United States.

Sisi also issued a decree appointing Maj. Gen. Salah Saraya commander of the Western Military Region, charged with securing the Western Desert bordering Libya, which has been experiencing an intense power struggle since mass protests and rebellion led to the overthrow and murder of long-time Libyan leader Moammar Gadhafi in 2011.

Ali Ahmad, a researcher at the newspaper As-Safir, told Al-Monitor by phone that Sisi’s recent and unexpected decisions follow the ongoing failure of Egypt's intelligence services to improve security in the Western Desert and other parts of the country. Ahmad said that arms smuggling operations across the Libyan-Egyptian border, reported as on the rise, were the main reason behind the personnel changes.

Islamic extremists appear to be trying to take advantage of the current environment to spread their influence in the Western Desert. Several attacks carried out by them have dealt painful blows to the Egyptian security services. The militant groups, some of which are involved in arms smuggling, oppose the regime and want Sharia imposed in Egypt. Some of them claim affiliation with the Islamic State.

Notable among the attacks carried out by the militants is the Farafra checkpoint ambush, in which 22 border guards were killed by members of an unidentified group on July 19, 2014. According to Ahmad, the worst attack took place in the Bahariya Oasis in October 2017, when gunmen from the previously unknown Ansar al-Islam targeted a police patrol. The Interior Ministry claimed that 16 people were killed and three injured, but several security sources reported that 35 soldiers had died in the operation.

There were several complaints about the failure of the security and military forces to rescue the police patrol or at the least to have prevented avoidable deaths. As a result, morale fell among the Armed Forces, Ahmad said.

According to Ahmad, the attack on the police patrol, which had been in route to raid militant hideouts, was the main reason for the dismissal of Mahmoud Hegazy, a Sisi relative, from the post of chief of staff of the Armed Forces on Oct. 28 and the appointment of Mohamed Farid Hegazy (no relation to Sisi), as his successor. Ahmad criticized an attempted media blackout imposed on reporting related to military staffing in an effort to minimize questions and speculation about the reasons behind personnel changes.

Khaled Okasha, director of the Egyptian Center for Strategic Studies, told Al-Monitor that Sisi’s personnel shake-up is aimed at breathing new life into crucial departments by providing them with leadership capable of enabling them to perform their duties more efficiently amid the increasing security challenges facing Egypt in general and in the west in particular.

Okasha noted that the border region with Libya has always been a source of concern as an area prone to conflict. This has especially been the case amid the security chaos plaguing Libya and the presence of active extremist groups — such as the Mourabitoun, Ansar al-Sharia, al-Fateheen and IS — in the area along the Egyptian border in Libya.

The Egyptian government, Okasha said, has come a long way in curbing armed operations by extremists in the Western Desert through operational means. Among the measures taken are the use of Sherpas, French-made armored vehicles, and the establishment two years ago of the Armed Forces Training Institute for improving the Special Forces. He also noted that the security branches had established special crisis management rooms equipped with GPS systems to track police and military patrols.

In addition to the elevation of Megawer, Saraya and Hegazy, Osaka remarked that Sisi had also appointed Rafiq Raafat Arafat and Nasser al-Assi commanders of the Second and Third Field Armies.

Okasha noted that the security forces had successfully conducted several operations in the Western Desert, including one that targeted a camp inside a cave above the Assiut-Sohag road in Assiut governorate on Oct. 15, killing nine men. Egyptian forces also killed 19 extremists in Minya who were believed to have been involved in an attack that targeted a bus of Copts on their way to the Monastery of St. Samuel on Nov. 2.