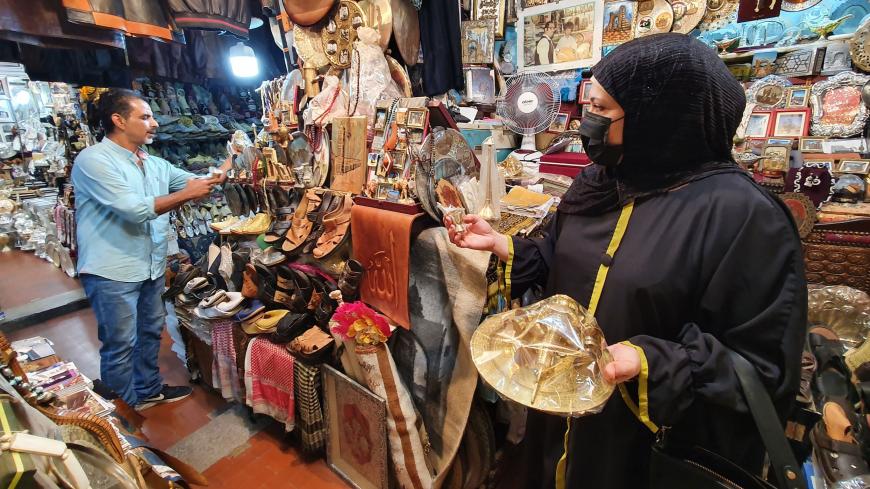 A woman views a Turkish coffee set as a vendor arranges souvenir merchandise at a bazaar in Libya's capital Tripoli on Sept. 28, 2020. - MAHMUD TURKIA/AFP via Getty Images

As Turkey promotes its products to the Libyan market, Istanbul hosted the first Turkish-Libyan Economic Forum on Oct. 15 with the participation of several Libyan and Turkish companies.

The Egyptian-Libyan Joint Economic Chamber criticized the forum and called for boycotting it on Sept. 24. “The whole world has rejected the Turkish presence in the Arab region,” the chamber said in a statement.

“This forum is a miserable attempt to stand with the Turkish Ministry of Economy, which is suffering these days due to [Turkish President Recep Tayyip] Erdogan's policies supporting terrorism and extremism, which have become exposed to the whole world,” the statement added.

In May, Mortada Kornfil, head of the Libya-Turkey Business Platform and of the Turkish-Libyan Economic Forum, revealed in a press statement a Turkish plan to gain a foothold in the Libyan market, saying, “Turkey can play a leading role and increase its share of the Libyan market as it seeks to raise the value of its exports to Libya by up to $10 billion in the medium term.”

He added, “Every day, 200 Egyptian cargo trucks make their way to Libya through the Musaid crossing.”

Jarari pointed out, “Most of the Egyptian products are available in the Libyan market in the eastern region as well as in Tripoli and Misrata. Because of their high quality, Libyan consumers have confidence in them.”

Speaking about the upcoming Libyan-Egyptian projects, Jarari said, “An agreement has been reached between the Military Investment Authority of the Libyan National Army [LNA] and two Egyptian companies; Hassan Allam [Holding] and the Nile Company, to construct the international coastal road from the Musaid crossing to Tobruk and from there to other Libyan cities. The project will be implemented in November to facilitate trade movement between the two countries.”

“The Federation of Egyptian Chambers of Commerce had agreed to hold an exhibition in Libya to promote Egyptian products in March, but it was postponed due to the COVID-19 pandemic and will be held in the coming days,” Jarari noted. He added, “An agreement will soon be made to establish an Egyptian-Libyan economic forum between Libyan and Egyptian companies.”

Speaking about Ankara's intentions, Jarari said, “Turkey wants to control the Libyan commercial ports through agreements that allow Turkish companies to manage them, but the Turkish plan will fail because the eastern region, where most of the ports are located, refuses the entry of any Turkish ship or product.”

He added, “The call to hold the [Turkish-Libyan Economic] forum came from Libyans affiliated with the Muslim Brotherhood to support the Turkish economy that is collapsing due to Erdogan’s policies.”

Jarari explained that the companies that took part in the forum are trying to gain control of the oil ports, "but the Turkish attempts have not succeeded because most of the oil fields are located in the eastern region and are under the control of the LNA.” He went on, “The forum resulted in an agreement on facilitating the movement of Turkish exports to Libya to promote Turkish products in the Libyan markets, but most of the commercial ports are located in the eastern Libyan region.”

Jarari said, “A campaign will be launched to boycott Turkish products in Libya in November in response to the blatant Turkish interference in the country's affairs and its support for militias.”

In March 2019, the Alexandria Chamber of Commerce held an Egyptian-Libyan business forum called “Libya and Egypt Toward Integrated and Sustainable Development.” At it the president of the Alexandria Chamber of Commerce, Ahmed al-Wakil, announced, “Studies have been conducted to establish an international logistics center next to the Salloum crossing in the Hadaba area to support bilateral trade and exports between the two countries.” He stressed, “There is an agreement to implement joint projects for the reconstruction of eastern and western Libya, especially in the fields of transport and logistics, roads and ports, infrastructure and electricity.”

Mounir Asr, the Libyan minister of economy in the Interim Government that manages the affairs of eastern and southern Libya, visited Cairo in 2019 and met with Ibrahim al-Arabi, president of the Federation of Egyptian Chambers of Commerce and of the Cairo Chamber of Commerce. The two parties agreed to support trade and investment cooperation between the two countries. Asr invited Egyptian businesspeople to visit Libya and support Egyptian-Libyan economic relations in various fields.

The director of the Egyptian-Libyan Joint Economic Chamber and Egypt’s representative in the chamber, Fahim al-Tahawi, told Al-Monitor, “These products have been sold in Libya since the era of former Libyan President Moammar al-Gadhafi.”

He added that Egypt and Libya's common border means that Egyptian products are cheaper than "Turkish products that are sold at high prices due to the distance between the two countries.”

Tahawi continued, “Egyptian products are also present in the markets of western Libya, which are controlled by the Libyan Government of National Accord [GNA] loyal to Turkey, but we face several problems, namely the targeting of Egyptian trucks by militias and the kidnapping of Egyptian workers.”

He explained, “It is difficult to establish investment projects inside Libya without security stability, so Turkey is trying to compete with Egypt in exporting its products to Libya, especially in western Libya, taking advantage of its political rapprochement with the GNA.”

Tahawi added, “Libyan consumers tend to prefer Egyptian products due to their low price, high quality and ample availability in the Libyan market.”