Ankara is expanding its influence in eastern Libya, deemed an area of Egyptian ​​influence. 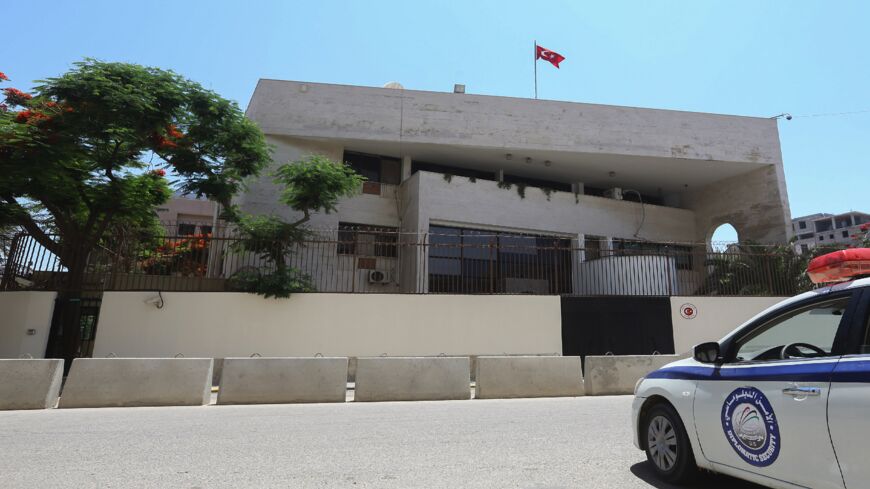 A picture taken on June 30, 2019, shows the Turkish Embassy in Tripoli. - MAHMUD TURKIA/AFP via Getty Images

Following months of conflict and accusations between the two parties, the relationship between Turkey and the Khalifa Hifter-led Libyan National Army (LNA) has seen a relative thaw.

On Jan. 20, Turkey's Ambassador to Tripoli Kenan Yilmaz visited eastern Libya and met with speaker of the Tobruk-based Libyan parliament Aqila Saleh, who is one of Turkey's most vocal critics.

“Saleh’s meeting with the Turkish ambassador to Libya is a qualitative leap in Turkish-Libyan relations, especially considering that eastern Libya has always been hostile to Turkey because of the latter’s support for the Muslim Brotherhood, its controversial military and security agreements with the former Government of National Accord (GNA), and because it brought thousands of Syrian mercenaries to fight against the LNA in the battle to liberate Tripoli," reported the Asharq al-Awsat newspaper Jan. 20.

Libya's Deputy Prime Minister Hussein al-Qatrani, who represents eastern Libya in the Libyan government, said in Jan. 19 press statements that “Turkey plans to reopen the Turkish consulate in Benghazi" and he “intends to visit Turkey at the end of this month.”

On Dec. 15, 2021, a delegation of Libyan parliament members affiliated with eastern Libya traveled to Turkey to meet with a number of Turkish officials, most notably Turkish President Recep Tayyip Erdogan.

The Libyan parliament said in a statement that “the meeting tackled the Libyan crisis developments, putting an end to foreign interference in Libyan affairs, and ways to achieve security and stability in Libya and the region.”

The Libyan parliament members who visited Turkey announced the results of their visit in a statement published on Dec. 18, 2021, saying, “The visit resulted in an agreement with the Turkish side to open the field of Libyan aviation and Libyan airlines, without exception, between the Benina International Airport located in eastern Libya and the Istanbul airport, as well as the opening of direct shipping lines with the commercial ports of Tobruk and Benghazi in eastern Libya.”

The visit was heavily criticized nonetheless. The Fezzan parliamentary bloc, which includes a number of parliament members from southern Libya, issued a statement on Dec. 16, 2021, denouncing the parliament members’ visit to Turkey.

"The visit made by a number of MPs to Turkey constitutes a major deviation, as it contradicts Libyan sovereignty, especially after Turkey’s encroachment upon Libya’s sovereignty," read the statement.

But the rapprochement between Ankara and eastern Libya is still limited to the Libyan parliament alone, as no meetings have been held between LNA representatives controlling eastern Libya and Turkish officials, despite Turkish Foreign Minister Mevlut Cavusoglu’s assertion that LNA commander Hifter requested a visit to Turkey.

“Hifter once wanted to come to Turkey on the condition that he meet with President Erdogan," but his demand was refused, Cavusoglu said in a televised interview on Dec. 29, 2021.

As for the Egyptian position on the rapprochement between Turkey and the eastern Libya-based LNA, Al-Araby Al-Jadeed newspaper reported on Jan. 13 that “there are Egyptian concerns whereby Ankara could anticipate coordination with Cairo by reaching an agreement with the UAE and its allies in eastern Libya to establish an official Turkish presence there, on the western border with Egypt.”

The newspaper reported that “Cairo hosted an unannounced meeting with LNA commanders and a number of tribe leaders in eastern Libya in order to have stronger cards should it join any understandings regarding Libya and have a strong position that guarantees its mandate in eastern Libya, in exchange for the Turkish mandate over western Libya, which Cairo started to recently seek to penetrate.”

The Turkish moves in eastern Libya coincide with the relative calm there that followed a period of electoral battles between candidates for the Libyan presidency, namely Hifter, Saif al-Islam Gadhafi and current Libyan Prime Minister Abdel Hamid al-Dbeibah. Such battles calmed further after the country postponed the parliamentary and presidential elections that were scheduled for Dec. 24.

Speaking to parliament on Jan. 3, Imad al-Sayeh, head of the High National Elections Commission, confirmed the difficulty of holding the elections for force majeure reasons. “The commission is facing threats if it issues the final list of candidates, including specific candidates,” he said.

The Libyan parliament and the High Council of State are discussing a new roadmap for Libya with the aim of forming a new government and reaching a new political track that could lead to the elections.

Libyan writer and journalist Ibrahim Belkacem told Al-Monitor, “The regional understandings between Egypt and the UAE on the one hand and Turkey on the other played out in favor of the Turkish rapprochement with eastern Libya.”

“Following the failure of the Libyan elections comes the stage of understanding and appeasement, which is why all parties are seeking to reach a formula of understanding," he added.

Belkacem said that Egypt is "also trying to seek rapprochement with western Libya during the current period through economic and political gateways away from military influence.”

Egypt had agreed in November 2021 with the Libyan government to facilitate the transfer of Egyptian workers to Tripoli, which is the most prominent city in western Libya, to take part in reconstruction projects.

Belkacem said, “Egypt has definitely detected Turkish moves in eastern Libya. But Cairo still maintains a strong presence in eastern Libya, especially in light of the Egyptian support for the LNA over the past years in the face of extremist organizations.”

"The coming period will witness several visits on the part of Turkish officials to eastern Libya and vice versa, including meetings between LNA representatives and Turkish officials in light of the new understandings taking place in the region,” he stressed.