Egypt and Libya concluded a cooperation agreement to set up mechanisms aimed at attracting Egyptian workers to reconstruction projects in Libya, where a new executive authority in Libya came to power. 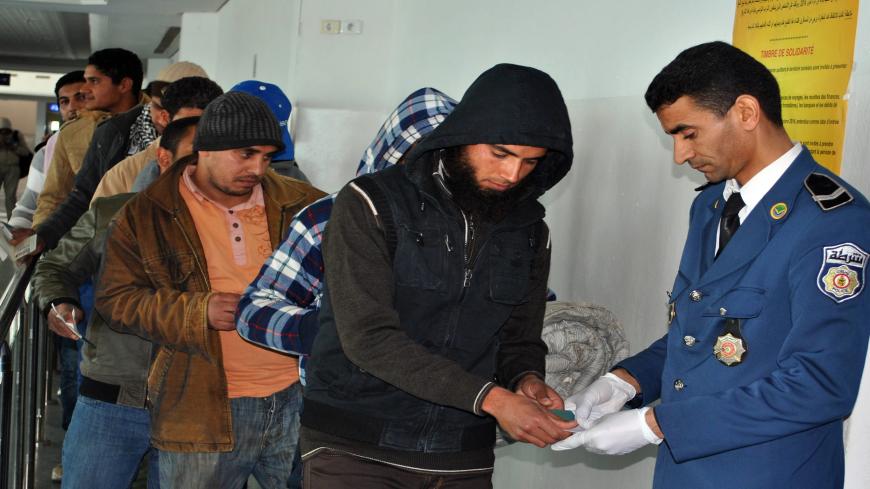 Egyptians, who were formerly residing in Libya, have their documents checked by Tunisian customs at Djerba airport on the Tunisian-Libyan border, before their departure for Cairo, Egypt, Feb. 23, 2015. - Fethi Nasri/AFP via Getty Images

At a time when a new unified government has been approved in Libya, Egypt is looking to boost its economic influence in the country by investing in the field of reconstruction and having Egyptian workers return to Libya.

The Egyptian Ministry of Manpower announced March 15 that it held talks with the Libyan Ministry of Labor to discuss the participation of Egyptian workers in the reconstruction of the Libyan state and set up an electronic system between the two ministries to determine the Libyan needs in this regard.

The ministry said in a statement that it had “agreed with the Libyan side to form a joint technical committee to tackle matters related to the electronic system between the two ministries’ information centers, as well as a higher committee to follow up on and supervise the work related to Egyptian workers.”

The Libyan Embassy in Cairo had announced March 13 having reached an agreement with Egypt to facilitate the entry of Egyptian workers into Libya and form a joint permanent committee representing the labor ministries of the two countries in order to follow up on the conditions of Egyptian workers. The embassy said that the two sides agreed to arrange for an Egyptian technical delegation to visit Libya soon to complete the remaining technical arrangements for the Egyptian laborers to partake in reconstruction projects.

Also, the National Union of Libyan Workers announced March 15 the establishment of an Egyptian-Libyan Labor Information Center for the union tasked with exchanging and documenting information and news related to the labor and trade union movements in the two countries.

“Egyptian workers will get priority in the process of rebuilding Libya,” the union stated.

On March 3, the Federation of Egyptian Chambers of Commerce announced the establishment of a unit to handle the inventory of reconstruction projects in Libya and provide the necessary information to Egyptian companies.

The federation said it established contacts with the Chambers of Commerce in Libya to determine the most important products that the Libyan market needs, as well as the most important sectors it wants to reconstruct and the conditions that companies need to participate in the reconstruction field.

The chamber estimated the investments in the Libyan reconstruction sector at about $100 billion.

Egyptian workers have been kidnapped and ill-treated in Libya, especially in western Libya, in the past years. A number of Egyptian workers were subjected to torture and humiliation in June 2020 after they were arrested by an armed group loyal to the Libyan Government of National Accord.

The Egyptian-Libyan relations recently evolved, as Cairo is keen to consolidate its relations and strengthen its economic relations with the new Libyan authority.

An interim authority headed by Dbeibah assumed power Feb. 5, as a new Presidential Council headed by Mohammad Younes Menfi got elected in the wake of elections held at the Libyan Political Dialogue Forum, which brought together 73 Libyan figures from various regions, under the auspices of the United Nations.

The French RFI Afrique newspaper revealed March 21 that a number of Turkish businessmen have intensified their visits to the city of Misrata in order to discuss ways to participate in the reconstruction of Libya.

According to the report, the Turkish Karanfil Construction group established the largest concrete facility in Libya’s Misrata and expressed its ambition to invest $50 million in its project as a step toward participating in reconstruction projects.

Ibrahim al-Jarari, head of the Libyan-Egyptian Joint Economic Chamber, told Al-Monitor, “Now that a unified government assumed power, Libya is to embark on reconstruction projects and a number of needed investment and commercial projects.”

He said that the agreement between the two ministries of manpower of Egypt and Libya is the first step toward the return of Egyptian workers, which amount to more than 2 million, to Libya.

Jarari noted, “There are many countries that compete with Egyptian workers in Libya, most notably Turkey and the Philippines, but there are several reasons that make Egyptian workers more suitable to work in Libya, such as the language, the convergence of cultures and the fact that the two countries are next to each other, as this saves transportation and travel costs.”

He said, “An Egyptian delegation from the Ministry of Manpower is visiting Libya during the coming period to see the most important projects and cities that need Egyptian workers and [determine] the needed security requirements to protect Egyptian workers.”

Jarari added, “The crisis of militia proliferation in western Libya is one of the most important obstacles facing Egyptian workers, and this is why Egypt is pressing for the dismantling of militias."

He concluded that “eastern Libya and the cities controlled by the Libyan National Army may [be the first to witness] the return of Egyptian workers to Libya as per the agreement.