Egypt and Libya agreed to have Egyptian workers return to the Libyan labor market at a time when Cairo seeks to contribute to the reconstruction of war-torn Libya. 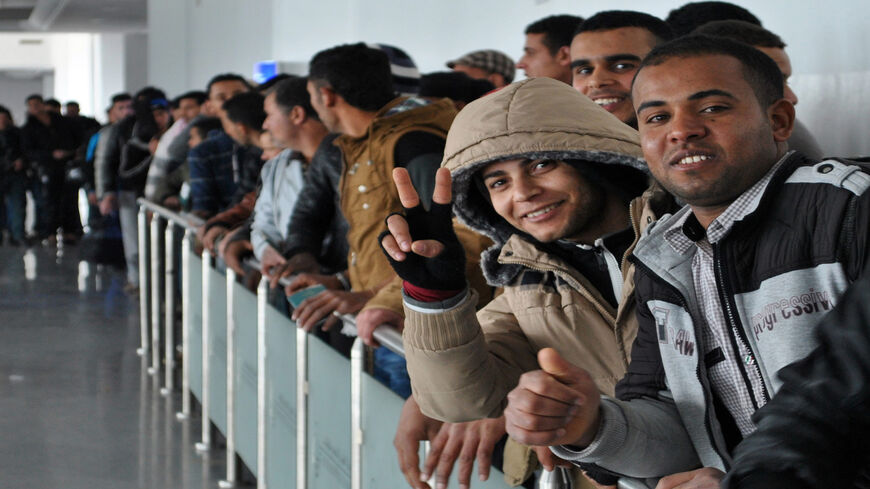 Egyptians, who were formerly residing in Libya, flash the sign for victory as they line up for checks by Tunisian customs at Djerba airport on the Tunisian-Libyan border, before being evacuated on a flight heading to Cairo, Egypt, Feb. 23, 2015. - Fethi Nasri/AFP via Getty Images

Following the yearslong instability that has taken a heavy toll on the influx of Egyptian workers in Libya, their numbers are expected to exceed 2 million by 2024, sources in the overseas recruitment field in Egypt told Al-Monitor.

Hamdi Imam, chairman of the Division of Recruitment Companies at the Cairo Chamber of Commerce, and chairman of Globo Human Resource, a recruitment agency for overseas jobs, told Al-Monitor that Egyptian workers will take part in the reconstruction of Libya where the civil war has wreaked havoc for an entire decade.

Egypt and Libya agreed April 20 to allow Egyptian workers to return to the Libyan labor market. The agreement came during the visit of Egyptian Prime Minister Mustafa Madbouly to the Libyan capital Tripoli, accompanied by a delegation of 11 ministers.

Imam said the first batch of Egyptian workers is expected to arrive in Libya once the procedures for the reopening of the Egyptian Embassy and consulate general in Tripoli are completed after Eid al-Fitr (the second half of May).

Egypt had closed its embassy and consulate general in Tripoli in January 2014, after gunmen stormed the consulate and kidnapped four diplomats.

Speaking at a joint press conference with Abdul Hamid Dbeibah, head of the Libyan National Unity Government, during his April 20 visit to Tripoli, Madbouly said there were 3 million Egyptian workers in Libya until 2011.

But his number, however, has drastically dropped due to the political and armed conflicts that engulfed Libya following the fall of the Moammar Gadhafi regime in 2011.

The Egyptian workers’ return to the Libyan labor market is part of 11 agreements signed between the two countries during Madbouly’s visit, on transport, housing and infrastructure sectors, as well as on health, manpower and electricity fields.

The two sides also agreed to resume passenger flights between Cairo and Tripoli and shipping between their ports.

Libya is a major destination for Egyptian workers coming from rural areas to work in the fields of construction and handicrafts. Yet as tension escalated in Libya in 2011, the Egyptian Ministry of Foreign Affairs repeatedly requested that expats living in Libya return home.

There are no precise figures on the number of Egyptian workers who remained in Libya back then. Yet Imam said that according to unofficial numbers, they amount to not more than several hundreds of thousands.

During the talks held between the two countries’ officials in Tripoli April 20, Dbeibah said that the inked deals are the harbinger of a new era in the partnership between Egypt and Libya.

Madbouly said during the Cabinet meeting that his visit to Tripoli reflected Egypt’s strong support for the Libyan territorial integrity and union and for an end to all tensions there. The visit, according to Madbouly, also showed that the Egyptian political leadership backs all measures taken by Libya’s Government of National Unity that would bring about development to Libya in the coming period.

Madbouly noted that during his visit, a date for resuming work for the Egyptian-Libyan Joint Committee, after it was suspended in 2009, was determined. He demanded that the relevant ministers coordinate with their Liyan counterparts to start the executive plans in preparation for the upcoming meetings of the committee.

On April 23, Egyptian President Abdel Fattah al-Sisi said in a video posted by the presidency that he has tasked the government with organizing the travel of Egyptian workers to Libya, including drawing up a list of workers along with their specializations, in addition to a list of Egyptian companies entitled to operate in Libya that include their expertise and competences.

Egyptian workers in Libya had suffered since Gadhafi’s fall, as the country turned into an arena for armed militias. While the conflict morphed into a proxy war, Egyptian workers have been subject to kidnapping, torture and killing.

Imam welcomed the step to bring Egyptian workers back to Libya. He said that it would help ease the impact of the coronavirus crisis on the workers who returned to Egypt due to the economic repercussions of the pandemic.

He noted that the demand for Egyptian workers has declined due to the poor economic conditions that came hand in hand with the coronavirus pandemic, particularly in the Gulf states.

There are 14 million Egyptians working overseas, but there are no official figures on the number of workers who were forced to return to Egypt due to the pandemic. Yet unofficial reports indicate that these numbers range between 1.5 million to 2 million, in light of the Gulf economies halting the services of many migrant workers.

Imam said that the reopening of Libya’s labor market to Egyptians will help increase remittances from Egyptians working abroad, which will bolster the gross national income (GNI).

Egypt’s GNI relies mainly on remittances as a source of hard currency, which, according to the Central Bank of Egypt, amounted to $29.6 billion in 2020.

A government study by the Institute of National Planning, which is affiliated with the Ministry of Planning, anticipated that remittances from Egyptians working abroad are more likely to drop in 2021 due to the pandemic.

Ahmed Aleibeh, a regional security studies researcher at the Egyptian Center for Thought and Strategic Studies, told Al-Monitor that Madbouly's visit and the agreements signed with the Libyan side come at a time when the main actors in Libya are eager to cooperate with the new Libyan authorities.

Egypt seeks to preserve its influence in Libya during the transitional period led by the newly formed Government of National Unity, under the UN umbrella, before elections are held by late 2021.

After the Libyan parliament gave a vote of confidence to the Government of National Unity, Egypt said that it is looking forward to working with the new government during the transitional period to get Libya out of the crisis and achieve security and stability in the region.

Libya has recently signed a number of economic agreements with Turkey — Egypt’s regional rival — including on energy and reconstruction, during Dbeibah's visit to Ankara. Dbeibah had arrived April 12 accompanied by a delegation of ministers and officials.

Aleibeh said that the service agreements on electricity, health and manpower consist of a qualitative leap that would shift Egypt's role in Libya. While priority was given earlier to the security situation in Libya, which is a matter of national security for Egypt as a result of their shared border, Egypt shifted to serve as a facilitator of the political process. It now wants to assume a role in Libya’s reconstruction and development, he concluded.