The visit by Egyptian President Abdel Fattah Al-Sisi to Baghdad is the first by an Egyptian head of state since 1990. 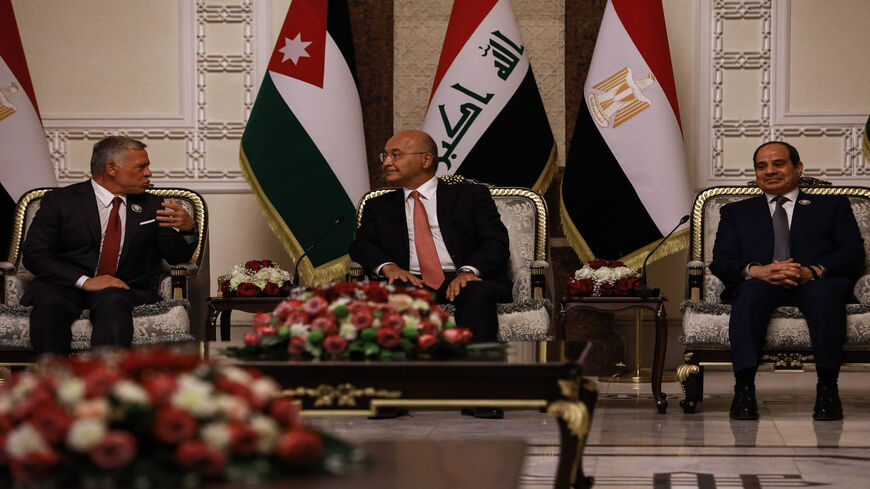 Egyptian President Abdel Fattah al-Sisi and Jordanian King Abdullah met in Baghdad June 27, the fourth such meeting among Iraqi, Egyptian and Jordanian leaders in less than three years. The trip had been postponed twice due to a train crash in Egypt and political crisis in Jordan.

The three leaders had previously met in Amman in August 2020, and former Iraqi Prime Minister Adel Abdul Mahdi also met with the other two leaders twice, in Cairo and New York.

The Iraqi government has adopted a new foreign policy to build an economic alliance with Arab countries toward the west.

Iraqi Prime Minister Mustafa al-Kadhimi called this new alliance “New East” in his meeting with the other two leaders in Amman. He has also referred to it as “New Levant."

The final statement of the summit highlights the goals of the meeting in “strengthening the partnership relations that bring together the Republic of Iraq, the Hashemite Kingdom of Jordan and the Arab Republic of Egypt within the mechanism of tripartite cooperation between them … within political, economic, commercial, industrial, security and other fields.”

The previous meetings had focused on investment and economic cooperation; several memoranda of understanding had been signed.

"We are in the stage of reaching the implementation of these projects, in the field of electrical interconnection, agriculture and transportation, as well as food security, financial and banking relations, and the development of its infrastructure,” Kadhimi said.

During the June 27 summit, the three leaders discussed establishing a permanent secretariat to coordinate tasks between the three countries and work to develop and follow up on what has been already agreed on.

In regard to the political field, the three leaders discussed major regional crisis in Syria, Libya, Yemen and Palestine. The final statement indicates that common visions have been reached toward these issues through cooperation and coordination, to help these countries overcome challenges and crises.

In the security and intelligence field, they agreed to enhance cooperation and coordination in regard to confronting terrorism and its financing.

The three countries have several opportunities to share and increase the development course of the region entirely.

Iraq is planning to establish pipelines through Jordan and Egypt, opening up the potential for new markets via the Red Sea and the Mediterranean Sea, including Africa and Europe, with possible positive impacts such as Anbar province that suffers from mass destruction remaining from the days of the Islamic State (IS).

Also, the new alliance would allow Iraq to become a transit hub for transferring goods from the east to the west, and vice versa. With the recent agreement with Iran to connect Iran's railway to Iraq through the Basra-Shalamcheh rail connection, Iraq will be connected to central Asia and northern China. This transportation system can be developed to include North Africa and Europe, which would bring great opportunities for a country with a growing population that is suffering from a high rate of unemployment.

Iraq is also taking on economic reform, set in the Ministry of Finance White Paper that is the first long-term economic reform plan in decades. The White Paper focuses on developing agriculture and industry in order to create job opportunities in the private sector and reduce the country's dependency on oil. Iraq receives over 97% of its revenues from oil, and it is expected to decrease this to about 70% based on the White Paper plan.

The cooperation with Jordan and Egypt includes several projects in agriculture and industry, not to mention trading and new opportunities that would be created in an open market between these three countries with a high youth population and diverse economic particularities.

Security and intelligence cooperation also is very important for these three countries due to having similar challenges with IS and other terrorist organizations that have been exploiting lack of coordination between countries in the region to expand their activities and find support for it.