No sooner had President Donald Trump unveiled his Middle East peace plan than Jordan reacted, warning against the dangerous repercussions such deal will have on the kingdom and on the region as a whole. 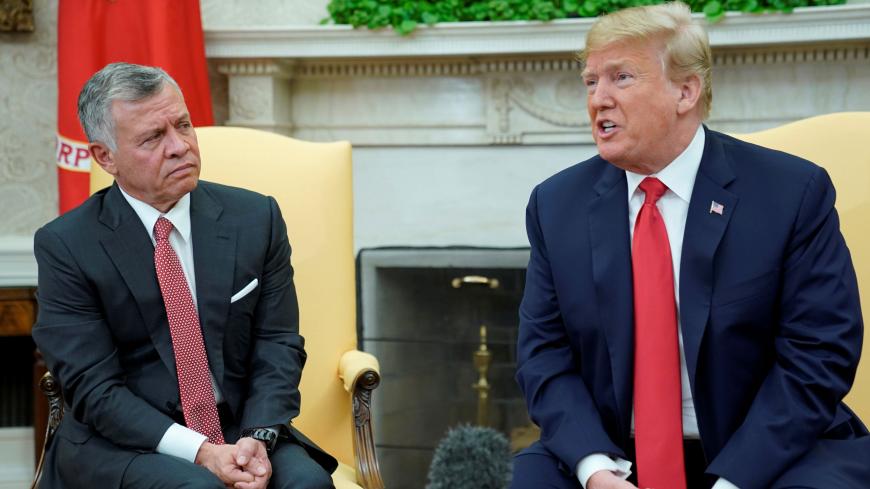 US President Donald Trump talks as he meets with Jordan’s King Abdullah II in the Oval Office of the White House in Washington, DC, June 25, 2018. - REUTERS/Jonathan Ernst

It took the Jordanian government less than an hour to respond to the US peace plan following its release by President Donald Trump Jan. 28 at a ceremony held at the White House. Foreign Minister Ayman Safadi said in a statement published by The Jordan Times that “the national interests of Jordan and its established and unwavering positions and principles toward the Palestinian issue governs the way the government deals with all proposals and initiatives aimed at resolving the conflict.”

Safadi reiterated his country’s support for an independent Palestinian state on the 1967 borders with East Jerusalem as its capital based on the two-state solution, which is the only way to achieve long-term peace. He also warned against “the dangerous consequences of unilateral Israeli measures, such as the annexation of Palestinian lands, the building and expansion of illegal Israeli settlements on occupied Palestinian lands, and encroachments on the Holy Sites in Jerusalem, that aim at imposing new realities on the ground.”

This was Jordan’s diplomatic way of rejecting Trump’s plan without saying so directly. The Trump peace plan contradicts Amman’s position as well as that of the Arab Peace Initiative of 2002. The plan recognizes Israeli sovereignty over 30% of the West Bank, including the Jordan Valley. It also underlines that Jerusalem will remain the undivided capital of Israel.

Jordanian officials have been in flux since the United States announced that Trump was getting ready to release his peace plan. Without access to its details, they knew beforehand that it departs from the classical two-state solution, which Jordan considers to be the only path to a just and lasting peace. In an interview with France 24 TV station Jan. 14, Jordan's King Abdullah II said, “We need to have the plan unveiled for us to be able to see it from a point of view of the glass half full.”

Trump’s son-in-law and the man behind the plan, Jared Kushner, had not visited Amman for more than a year. But every time he was here, King Abdullah told him that Jordan remains committed to the two-state solution and to East Jerusalem being the capital of the state of Palestine.

In the White House ceremony Jan. 28, Trump referred to King Abdullah’s role over Al-Aqsa Mosque in East Jerusalem. But on Jan. 29, Jordan’s Ministry of Awqaf and Islamic Sites warned against changing the status quo at Al-Aqsa and forcing a new reality. In a statement, it said there can never be a partnership (division) of the holy site, and Jordan has sole custody over it.

During a meeting with officials in the southern city of Aqaba Jan. 26 and in response to a question on the so-called "deal of the century,” the king said his position is well known to everybody and “our answer is no, which is clear to everyone.”

His reference to “no” resonates with statements he made last year on a number of occasions. The last was on March 27, 2019, when he said that Jordan will never accept relinquishing its role in Jerusalem, nor will it accept settling Palestine refugees in Jordan or become an alternative Palestinian homeland.

One informed source told Al-Monitor that Trump’s plan is, in reality, Benjamin Netanyahu's plan, “written by him and offered to him.” The Israeli prime minister was by Trump’s side at the White House as he talked about his peace plan. The Jordanian ambassador in Washington declined an invitation to attend the ceremony. The ambassadors of Oman, Bahrain and the UAE attended the event.

Jordan will come under pressure in the coming weeks as it defends the two-state solution at a time when there are worrying signs that support for Trump’s plan may be gaining traction in some Arab and European capitals.

For Amman, it is not the immediate effect of the plan that is the major concern but its long-term ramifications. There is a belief here among senior officials that Israel’s far right will never accept a Palestinian state under any condition in the West Bank, and that once full annexation takes place all eyes will be on Jordan to assume a role in running Palestinian population centers. There are also fears that the demographic problem that will arise from the Israeli annexation of the West Bank will be resolved at Jordan’s expense through the fulfillment of an Israeli far-right claim that Jordan is Palestine.

To pre-empt rumors that Jordan was considering canceling a 1988 decision to disengage from the West Bank, Safadi told reporters Jan. 25 that such rumors were false and such an issue was never under consideration.

The key issue now for Jordan is how it will react if and when Israel annexes the settlements and the Jordan Valley. Last September, King Abdullah told MSNBC that annexation will have “a major impact on the Israeli-Jordanian relationship and also on the Egyptian-Israeli relationship because we are the only two Arab countries that have peace with Israel.” It is no secret that ties between Jordan and Israel are already at a historic low.

In his France 24 interview, the king admitted that the “West Bank is an issue that has tremendous, I think, negativity toward the Israeli-Jordanian relationship.”

With Netanyahu bent on carrying out the annexation as soon as possible with US blessing, the king understands that room for maneuverability is getting smaller.