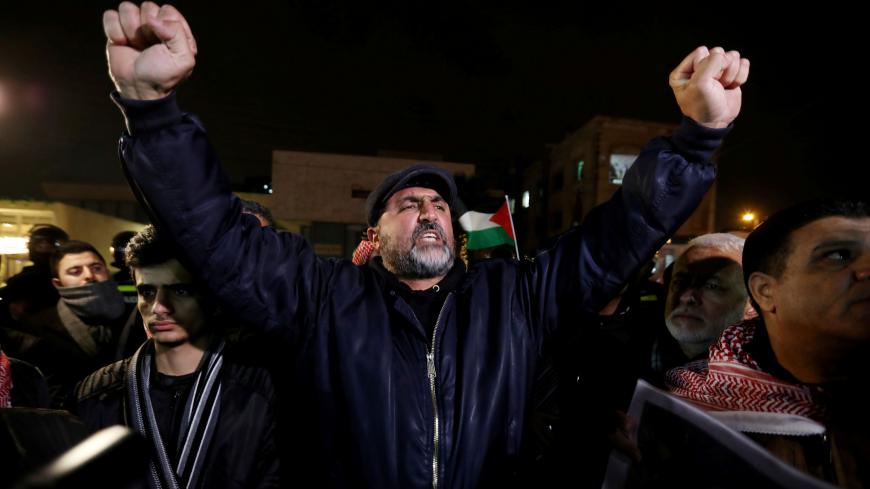 Protesters shout slogans during a protest against US President Donald Trump's proposed Middle East peace plan near the US Embassy in Amman, Jordan, Jan. 28, 2020. - REUTERS/Muhammad Hamed

AMMAN — As US President Donald Trump unveiled the details of his peace plan Jan. 28, dozens of Jordanians rallied in front of the US Embassy in Amman. They decried the so-called "deal of the century" and demanded the closure of the US and Israeli embassies in Amman.

At the sit-in called for by the Muslim Brotherhood, the protesters chanted, “Raise your voice," "Down with the Americans' approach," "No embassy for the Zionist entity on your land, O Amman," "No US embassy on your land, Amman," "Palestine is an Arab [state]" and "Down with Wadi Araba,” a reference to peace agreements with Israel.

They rejected Trump's declaration of Jerusalem as the undivided capital of Israel and denounced the plan for denying Palestinian refugees the right to return to Palestine.

Secretary-General of the Islamic Action Front Murad Adayleh told Al-Monitor, “The Jordanian and Palestinian people will not accept the abdication of Jerusalem. I warn the Arab regimes against participating in this deal. The Arab people will not tolerate the loss of an inch of Palestine. Whoever signs or executes this deal will be held accountable.”

The popular position against the deal mirrors the official Jordanian position. The kingdom, which hosts 2.1 million Palestinian refugees and holds custodianship of the holy sites in Jerusalem, fears the Palestinian issue will be settled at its expense.

King Abdullah II had explicitly voiced his rejection of the US plan during his Jan. 26 visit to Aqaba. “Our position is very well known toward the so-called 'deal of the century.' The word ‘no’ is clear to everyone,” he said.

But will Jordan pay a price for rejecting the deal? There are concerns in political quarters that Jordan will face economic pressures by the United States, which provides the kingdom with $1.08 billion worth of annual aid.

Former Deputy Prime Minister Mamdouh al-Abbadi said it's unlikely the United States will cut aid to Jordan and affirmed that Jordan will not back down on its opposition to the plan.

“King Abdullah II made his choice and said no,” he told Al-Monitor. “Jordan has strategic alliances with the West. The aid it receives falls within the scope of institutional work in the US. Jordan’s rejection of the 'deal of the century' will not affect the US economic support.”

Al-Monitor spoke to political analyst and author Amer Sabayleh, who argued that Jordan will lose if it decides to change the nature of its relationship with the United States. “The US is the official sponsor of Jordan, with $1.8 million of annual aid,” he said, and hinted that although the current relationship between Jordan and Israel is rocky, mutual intelligence-based interests might smooth complications.

The joint press conference for Trump and Israeli Prime Minister Benjamin Netanyahu did nothing to reassure Jordan about the Hashemite custodianship of Jerusalem’s holy sites. “Israel will work closely with a wonderful person, a wonderful man, the King of Jordan … to ensure that all Muslims who wish to visit peacefully and pray at the Al-Aqsa Mosque will be able to do so,” Trump said during the unveiling of his peace plan.

Jordanians' fears are not limited to the future of Jerusalem, as the kingdom also fears Israeli annexation of the Jordan Valley. For Jordan, such a move would cut off communication between Jordan and the Palestinian territories. It would harm Amman’s interests by cutting off any chances of establishing a a Palestinian state with clear boundaries and deny Palestinian refugees' right of return.

Political analyst Lamis Andoni told Al-Monitor, “The 'deal of the century' is a real danger for Jordan. By annexing Jerusalem and settlements and seeking to annex the Jordan Valley, the only thing that will remain of Palestine would be separate cities. No state will be established.”

In the first official Jordanian response to Trump's peace plan, Jordanian Foreign Minister Ayman Safadi affirmed in a press statement on the same day that only the two-state solution meets the legitimate rights of the Palestinians, including the right to establish a state based on the borders of June 4, 1967, with East Jerusalem as its capital, is the only path to a comprehensive and lasting peace.

A coalition of leftist and nationalist parties announced that a sit-in will be held Jan. 31 in front of the US Embassy in Amman in protest of the deal.

Jordanian activists also protested in front of the Prime Ministry demanding the government cancel its gas agreement with Israel.