Jordan stands firm against Trump deal despite risks to ties

There are growing concerns that Jordan’s defiance toward the US peace plan for the Middle East could affect its strategic ties with the United States. 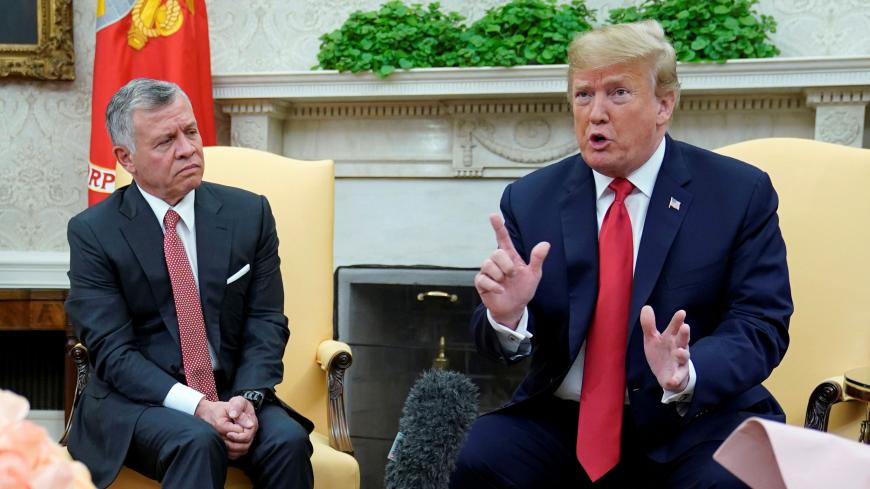 US President Donald Trump speaks to reporters while meeting with Jordan’s King Abdullah in the Oval Office at the White House in Washington, DC, June 25, 2018. - REUTERS/Jonathan Ernst

Now that Jordan has made its position clear on President Donald Trump’s plan for peace in the Middle East, will Jordan pay a price for its stand?

Since the unveiling of the plan, without explicitly commenting on it, King Abdullah has continued to reiterate his long-standing position on the conflict between Israel and the Palestinians and achieving peace between Arab states and Israel. That position, which is based on the Arab Peace Initiative of 2002 and UN resolutions, calls for the establishment of a Palestinian state along the 1967 borders with East Jerusalem as its capital as well as a just resolution of the Palestine refugee issue.

Jordan has been active in promoting a common stance in the Arab League and the Organization of Islamic Conference in meetings this month. Both have rejected the plan. Amman has also taken the lead in opposing Trump’s 2017 unilateral recognition of Jerusalem as Israel’s united capital as well as the US administration’s attempt to defund UNRWA, the UN agency responsible for the welfare of Palestinian refugees.

The last time Trump’s son-in-law and special adviser Jared Kushner was in Amman was last August to meet the Jordanian king. Sources told Al-Monitor that the king rebuffed Kushner’s approach and repeated Jordan’s policy of backing the classical two-state solution as the only way forward.

But now there are growing concerns that Jordan’s defiance could affect its strategic ties with the United States. Trump’s plan mentions the kingdom’s special role with regard to Al-Aqsa Mosque, but leaves the door open to the possibility of allowing non-Muslims to pray there — a bone of contention between the current Israeli government and Amman. The last time the two sides had re-committed themselves to preserving the status quo at Haram al-Sharif/the Temple Mount was in 2015 through mediation by Secretary of State John Kerry.

One senior Jordanian source told Al-Monitor that Jordan has two immediate concerns: Jordan’s custodianship of Muslim and Christian holy sites in East Jerusalem and the fate of Palestine refugees. With more than 2 million, Jordan is the world's largest host of Palestinian refugees. The Trump plan limits the right of return to a future Palestinian state and opens the door for settlement in host or third countries, anathema for Jordan as it threatens its demographic balance and gives credence to Israeli far-right claims that Jordan is a de facto Palestinian state.

For a third weekend, on Feb. 14, thousands of Jordanians continued their protest against Trump’s so-called "deal of the century." They also called for the abrogation of the natural gas deal between Jordan and Israel. But a number of parties have raised concerns over how the Trump administration might respond.

Former deputy prime minister and vice president for studies at the Carnegie Middle East Center Marwan Muasher said that the US plan seems to ignore Jordan’s traditional role as an interlocutor. He told Carnegie on Jan. 31, “The Trump administration is effectively treating Jordan as collateral damage.” He added, “Jordan cannot commit political suicide by accepting a plan that falls far short of meeting the minimal needs of the Palestinians and Jordan, regardless of any threats or incentives. This is an existential issue for the country.”

Political commentator Fahd al-Khitan, who is close to government circles, wrote in Al-Ghad Feb. 10 that senior officials are concerned that the US administration might suspend aid to Jordan to force it to embrace the Trump plan. “The unpredictability of the White House is a cause of concern,” he said. But he added that such a step is highly unlikely since Jordan continues to support US mediation efforts and remains committed to its peace treaty with Israel. Khitan added that Jordan is an important partner in the fight against terrorism and continues to have close security and intelligence coordination with the United States.

On Feb. 12, pro-government Al-Mamlaka TV reported that the Trump administration has allocated $1.3 billion in its proposed 2021 budget as aid to the kingdom. This year’s budget includes $1.274 billion in aid.

But while Jordanians have focused on the political aspect of the plan, little attention has been given to the economic incentives that the kingdom could receive if the plan is implemented. Former Minister of State for Economic Affairs Yusuf Mansour looked into the plan's offerings to Jordan. In a study published Feb. 13 by Arab Renaissance for Democracy and Development, he wrote that the plan proposes 15 projects worth $7.367 billion over 10 years.

Mansour concluded that most of these projects are understudied and unclear in terms of funding. Most are not a priority for Jordan, but meet Israel’s security needs and would end up adding to the kingdom's foreign debt with little direct benefit. The projects include improving transportation, building the first and second phases of the Red Sea-Dead Sea canal, supporting solar energy production and improving railway services.

Mansour added that financing for the projects would come at the expense of other projects already in the pipeline. The most negative outcome, he concluded, would be to add to the kingdom’s public debt burden, now standing at more than $42 billion, by another $2.9 billion.