Why king’s visit to Washington was essential for Jordan

King Abdullah’s visit to the United States, where he met with President Donald Trump, helped reassure Jordanians that US military and economic support for the kingdom will continue. 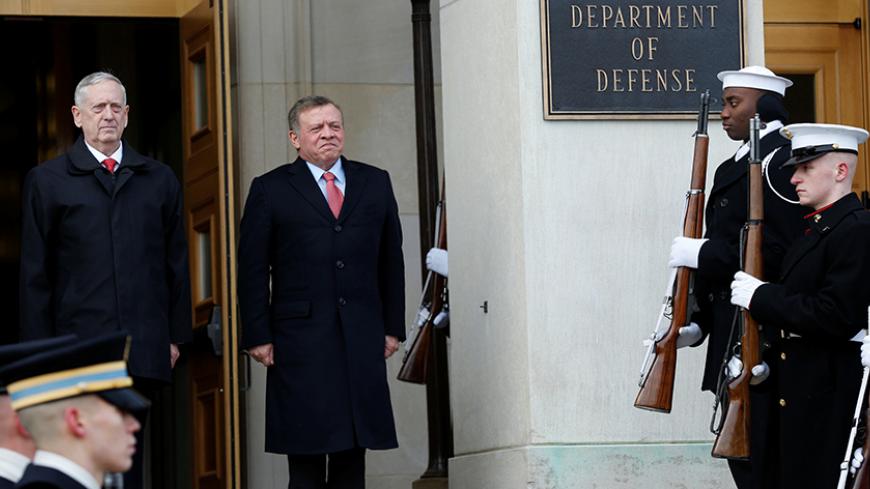 Jordanians are feeling a certain sense of pride following King Abdullah’s recent visit to Washington, where he conferred with key administration and congressional officials and became the first Middle Eastern leader to meet with President Donald Trump. Although Abdullah's Feb. 2 meeting with Trump was brief, taking place on the sidelines of the annual National Prayer Breakfast, it covered an array of issues of particular importance to the Jordanian monarch and the region. The White House issued a statement in which it said that Trump had “conveyed the US’ commitment to Jordan’s stability, security and prosperity.” It added that the president had “highlighted Jordan’s critical contributions to defeating IS [Islamic State] and discussed the possibility of establishing safe zones in Syria.” In addition, it said, Trump “underscored that the United States is committed to strengthening the security and economic partnership with Jordan.” These expressions of commitment signaled the success of the royal visit in the eyes of the king and a majority of Jordanians.

A royal court statement quoted by the Jordan Times said the two leaders also discussed the Syrian crisis, reviving Israeli-Palestinian peace negotiations and ways to boost their strategic partnership and work jointly to combat terrorism. The newspaper also reported, “The two leaders agreed to hold a summit meeting during an official visit King Abdullah will make to the US soon.”

Local media praised the king’s diplomatic breakthrough and one commentator, Fahd al-Khitan, wrote Feb. 2 in al-Ghad that Abdullah had fought a diplomatic battle in the US capital on behalf of all Arabs. He also noted that the Jordanian monarch had met the US president even before Israeli Prime Minister Benjamin Netanyahu had done so. A number of Amman dailies pointed to a Feb. 2 New York Times article in which the authors credited Abdullah for a shift in Trump’s policy on the construction of new Jewish settlements in the Palestinian territories.

In regard to the settlements, on the day of the Abdullah-Trump meeting, the White House issued a statement described by some as a warning to Israel after announcements of new approvals for settlement construction on the West Bank, including in East Jerusalem. The statement read, “While we don’t believe the existence of settlements is an impediment to peace, the construction of new settlements or the expansion of existing settlements beyond their current borders may not be helpful in achieving that goal.”

Trump's surprising position on one of the most controversial issues impeding the resumption of peace talks between Israel and the Palestinians was hailed by local observers as an important outcome of the king's visit. In fact, during his five days in Washington, Abdullah did not shy away from highlighting the risks in carrying out Trump's election promise to relocate the US Embassy from Tel Aviv to Jerusalem. A regular visitor to the US Capitol, Abdullah maintains good relations with senators and representatives on both sides of the aisle and met with chairs and members of various congressional committees Jan. 31. According to a royal court statement, “The king warned that moving the US Embassy to Jerusalem will have regional consequences that will diminish the opportunity for peace and reaching the two-state solution. It may also weaken the chances for a successful war on terror.”

Although diplomatically unusual, Abdullah’s working visit to Washington only a few days after Trump's inauguration was politically essential for Jordan. The king, who will host the annual Arab summit March 29, wanted to convey Arab concerns about key regional issues — such as Syria, the Israeli-Palestinian peace process, terrorism, instability in Iraq and other matters — before the new administration develops policy on them. Probably even more of a priority was Abdullah's desire to receive assurances that Jordan's strategic military and economic relationships with the United States will remain unchanged or perhaps be increased, which he did.

Jordan relies heavily on US economic and military assistance, which was boosted under the Barack Obama administration and in 2016 totaled $1.6 billion. The presence of more than 1.2 million Syrians in the kingdom (including more than 650,000 registered refugees), the war in Syria, the closure of the Jordanian border with Iraq and a decline in aid from Gulf states have exacerbated economic conditions in Jordan. In particular, 2017 will prove to be a difficult year for Jordanians as the government seeks to raise $643 million in additional taxes and tariffs.

Another issue Abdullah underscored during his visit was Jordan’s pivotal role in fighting IS, which presents a threat to the kingdom through its presence in southern Syria, close to Jordan’s borders, as well as internally. He raised the topic in a meeting with Vice President Mike Pence Jan. 30, and according to a royal statement, “The King emphasized that Muslims are [the] No. 1 victims of the outlaws of Islam, the Khawarej, who pose a global problem and do not represent any faith or nationality and target all of us who do not subscribe to their ideology of hate.” His defense of moderate Islam was important in the wake of Trump’s controversial Jan. 27 executive order banning entry into the United States by visitors from seven majority-Muslim countries.

Amman joined the US-led anti-IS coalition in fall 2014 and paid a heavy price when the terrorist group burned alive a captured Jordanian pilot whose plane had been shot down over Raqqa in December 2014. Although not much has been said about Jordan’s military operations against the organization in recent months, the Jordan Times reported the Jordanian armed forces as having disclosed on Feb. 4 that its jets had destroyed various IS targets in southern Syria. This latest operation indicated Jordan’s readiness to launch preemptive raids against IS targets not far from its borders, something that the Trump administration, which has put the defeat of IS among its top foreign policy objectives, apparently supports.

Political commentator Oraib al-Rantawi told Al-Monitor that it was important for Abdullah to hear Trump’s and other top US officials’ views concerning the Syrian crisis, especially in regard to developments on the southern front and the president’s desire to establish safe zones inside Syria. The king had met with Russian President Vladimir Putin in Moscow Jan. 25 and praised Russia’s role in trying to resolve the Syrian crisis and in fighting terrorism. “The king has managed to maintain good relations with both Moscow and Washington and followed a policy that safeguarded Jordanian interests away from regional polarizations,” Rantawi said.

In the eyes of former Prime Minister Taher al-Masri, the royal visit represented a triumph of Jordanian diplomacy. “The king managed to secure our national interests in this volatile and complex region,” Masri remarked. He told Al-Monitor that while Trump’s official position on Israeli settlements and Jerusalem remain in question, the king was able to influence the new US administration on these sensitive issues. “We hope the fruits of this visit will materialize soon and will spare this region further suffering,” said Masri.