Jordanian King Abdullah's two-hour visit to Ramallah was meant to send a number of signals to multiple parties. 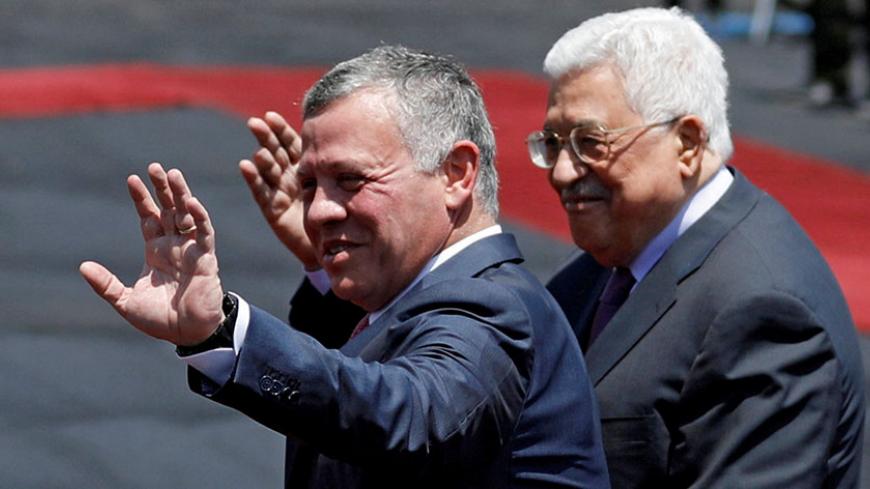 Jordanian King Abdullah’s Aug. 7 visit to Ramallah, his first in five years, was symbolically important for Palestinian President Mahmoud Abbas and was also intended to send signals to a number of other parties. Abdullah flew by helicopter from Amman to Abbas’ headquarters in the wake of two incidents that have tested Jordan's tenuous relations with Prime Minister Benjamin Netanyahu's Israel: the crisis over Haram al-Sharif (to Jews, the Temple Mount) that erupted July 14 and the killing of two Jordanians in Amman on July 23 by an Israeli security guard at the Israeli Embassy, which remains closed.

Abdullah's two-hour visit to Ramallah was seen by some observers as a snub to Netanyahu and a morale booster for Abbas. Palestinian sources told Al-Monitor that having suspended security coordination with Israel on July 30 to protest unilateral security measures it took at Haram al-Sharif, the site of Al-Aqsa Mosque, Abbas preferred to stay in the occupied territories rather than request a permit from the Israelis to travel abroad in accordance with bilateral agreements. Some reports suggested that he was confined to his residence by Israel in retaliation for his decision. He was also reported to have checked in to a local hospital, suffering from exhaustion.

The king’s short visit was meant to show solidarity with the Palestinian leader and to emphasize Jordan’s support for the “legitimate rights of the Palestinian people, stressing that the kingdom stands by them in seeking to establish an independent Palestinian state, with East Jerusalem as its capital,” according to a royal court statement. Abbas gave credit to the king for defusing the crisis over Al-Aqsa, according to the same statement.

For Abdullah, it was important to underline his personal role as a custodian and guardian of Muslim and Christian holy places in East Jerusalem. The royal court statement said that Jordan “will continue to safeguard holy shrines by working with the international community,” stressing the “need to preserve the historical and legal status quo in Jerusalem, warning that any meddling will have negative consequences on the region.”

There was more, however, than just sending a stern message to Netanyahu. The king also wanted to remind the Americans of their promise to revive peace efforts and of Abbas’ essential role in reaching a deal.

“The king also noted US President Donald Trump’s commitment to working toward peace between the Palestinians and the Israelis,” the royal court said. Abdullah highlighted the significance of working “with the US administration to push the peace process forward and relaunch serious and effective negotiations between the Palestinians and the Israelis, based on the two-state solution.”

Despite past differences with Abbas over policy — leading in 2015 to an unprecedented lack of personal meetings between the two men for many months — Jordan is now throwing its full support behind the embattled Palestinian leader, who faces growing domestic and regional challenges. For Amman, the revival of peace talks based on the two-state solution is a crucial cornerstone of its national security. Abdullah, who hosted this year's Arab League summit meeting in March, has been working his international and regional contacts to keep the Palestinian issue in the spotlight as the core of all conflicts in the Middle East.

Amman is worried, however, that Abbas, now 82, is running out of time. He has health issues, but in Amman’s view, he remains the only Palestinian leader capable of negotiating and delivering a peace deal with Israel, despite efforts by Netanyahu’s far-right Cabinet to demonize and discredit him. Israeli ministers often question Abbas’ credentials as a peace partner, and Netanyahu has accused him of inciting violence.

Amman is also concerned about the fate of the Palestinian Authority (PA), which faces severe financial troubles and may soon lose US funding if Congress passes the Taylor Force Act. The proposed legislation compels the State Department to cut off money to the PA unless Abbas terminates monthly stipends to families of Palestinians convicted for targeting US and Israeli citizens.

Adding to Jordan’s concerns is that Abbas has been unable or unwilling to reconcile with Hamas, the Islamist movement that took control of the Gaza Strip by force in 2007. More recently, Abbas launched an economic war on Gaza, firing thousands of Hamas PA employees and calling on the Israeli government to decrease the daily supply of electricity to the besieged area. While Amman has not commented on the recently concluded entente between Hamas leaders and Abbas’ rival, ousted Fatah leader Mohammed Dahlan, Jordan is concerned that Gaza’s political separation from the West Bank could become permanent. Right-wing Israeli ministers have often referred to Gaza as a Palestinian state and vowed to annex most of the West Bank to Israel.

In addition, Amman is worried that key Gulf states are preparing to normalize relations with Israel in the absence of a final settlement with the Palestinians, thus bypassing Amman and Ramallah. Like Abbas, Abdullah has pinned high hopes on US President Donald Trump delivering a new peace initiative, but the Jordanian monarch realizes that time is ticking on a solution. In a meeting with local lawmakers Aug. 6, the king was reported by the Jordan Times to have told them that there “would be no breakthrough in the peace process without a US push for a solution,” and that “the future of the Palestinian cause is at stake and applying solutions is becoming increasingly difficult.”

In the view of one local commentator, the Ramallah visit was meant to say that the Palestinians have only one legitimate leader who represents their aspirations. Writing in the daily Ad-Dustour Aug. 9, Oraib al-Rantawi said that the king’s visit sought to help Abbas recover from “political indisposition,” as “he has clearly lost any hope in Netanyahu and is frustrated with the Trump administration and remains suspicious of Arab governments’ meddling in Palestinian affairs.”