How far can Jordan’s king go in opposing the US president's Jerusalem stance without risking a backlash that could hurt his strategic relationship with Washington? 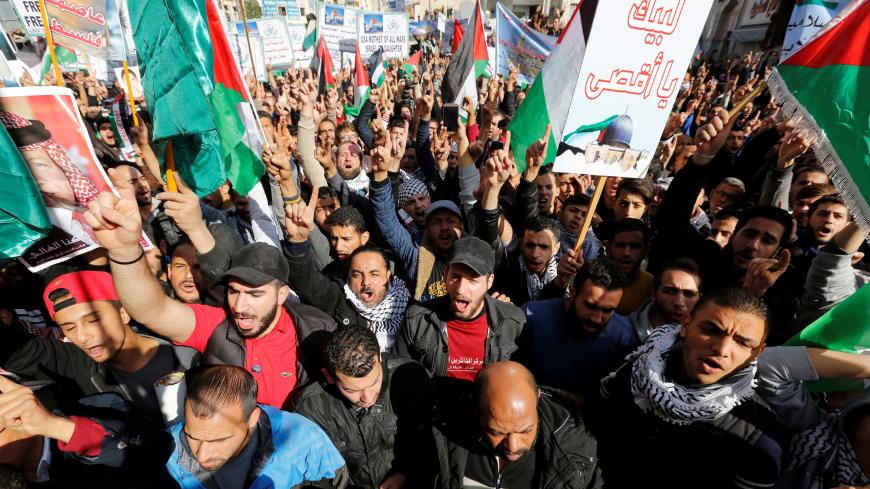 Apart from the Palestinians, Jordan stands to lose the most from President Donald Trump’s bombshell announcement on Dec. 6 that the United States recognizes Jerusalem as Israel’s capital and that it will relocate its embassy there. Jordan's King Abdullah took an accordingly hard-line position denouncing the decision while mobilizing international and regional diplomatic efforts to stand up to it. On Dec. 13, the king told representatives of the Organization of Islamic Cooperation (OIC) at its summit in Istanbul that the US move was “dangerous” and “a threat to peace.” He added that there was “no alternative to Jerusalem as the key to ending the historical conflict in the Middle East.”

Jordan was quick to react after Trump announced his decision, calling for an emergency meeting of the Arab League’s foreign ministers in Cairo on Dec. 9. Its own foreign minister, Ayman Safadi, announced that Jordan would host an “extraordinary” Arab summit without specifying a date. Safadi called US Secretary of State Rex Tillerson on Dec. 11 to present Jordan’s point of view and traveled to Brussels to meet with EU foreign policy chief Federica Mogherini on Dec. 12. Mogherini urged support for Abdullah as “the custodian of Jerusalem’s holy places,” calling him a “very wise man.”

The king had traveled to the Saudi capital Riyadh on Dec. 12 to meet King Salman bin Abdul-Aziz Al Saud. The two leaders discussed the ramifications of the US decision on regional security and stability, as well as on peace efforts, according to a royal court statement in Amman. The king had also discussed the US move in separate telephone calls with Palestinian President Mahmoud Abbas and Egyptian President Abdel Fattah al-Sisi.

Jordan’s diplomatic offensive to confront the US decision, which it described as “illegal,” underlines its growing concern over the fate of the two-state solution, which had become a cornerstone of its national security policy. It sees Trump’s move as pre-judging the future of occupied East Jerusalem, which is one of the major issues in the final status negotiations. It also sees the move as pre-empting purported efforts by the Trump administration to reach a final settlement between Israel and the Palestinians.

Furthermore, it sees the vague US recognition, which did not mention East Jerusalem by name and only referred to freedom of worship in the Holy City, as threatening its own role as custodian of Muslim and Christian sites in the occupied city. Jordan has clashed with Israel over the past few years, most recently in July, over attempts to change the status quo of Haram al-Sharif, or what Israel calls the Temple Mount. Since the Trump announcement, there have been repeated incursions by Jewish zealots of the Noble Sanctuary, where Al-Aqsa Mosque is located.

But Abdullah’s concerns go beyond the immediate effects of the Trump announcement, which is seen here as having delivered a fatal blow to the two-state solution. The escalation of Jordan’s diplomatic offensive against its most important financial and military backer underlines its anxiety over the long-term ramifications of the US move. By recognizing Jerusalem as Israel’s capital, the United States delighted Israel’s far right, which does not conceal its rejection of a peaceful settlement with the Palestinians and goes as far as claiming that Jordan is a Palestinian state.

The so-called Jordan Option, first suggested after the 1967 war and later popularized by right-wing Israeli parties in the 1980s, was put to rest after Jordan and Israel signed a peace agreement in 1994. But the claim was echoed by key Israeli ministers under Prime Minister Benjamin Netanyahu and his far-right and ultranationalist coalition partners.

Trump’s yet-to-be disclosed “ultimate deal” to reach a regional settlement of the Arab-Israeli conflict has amplified Jordanian existential fears. Jordan has not commented on recent reports that Trump’s Middle East peace team was coordinating with Saudi Arabia to force a take-it-or-leave-it proposal on Abbas, one that precludes Palestinian claims to East Jerusalem and drops demands of an Israeli withdrawal to the 1967 borders. More importantly, it could include an option to tie Palestinian urban centers to Jordan through a confederation formula.

This consideration explains why Abdullah has chosen to up the ante through a sustained diplomatic offensive and why he is backing Abbas, who has adopted extreme anti-US positions. But the big question here is: How far would the king go in opposing the US move, and Trump in particular, without risking a backlash that could hurt his strategic relationship with Washington? At a time when Jordan is becoming increasingly dependent on US economic and military aid, estimated at $1.2 billion in 2017, and as Amman and Washington seek to fortify a long-term security agreement, the king’s gambit looks risky at best.