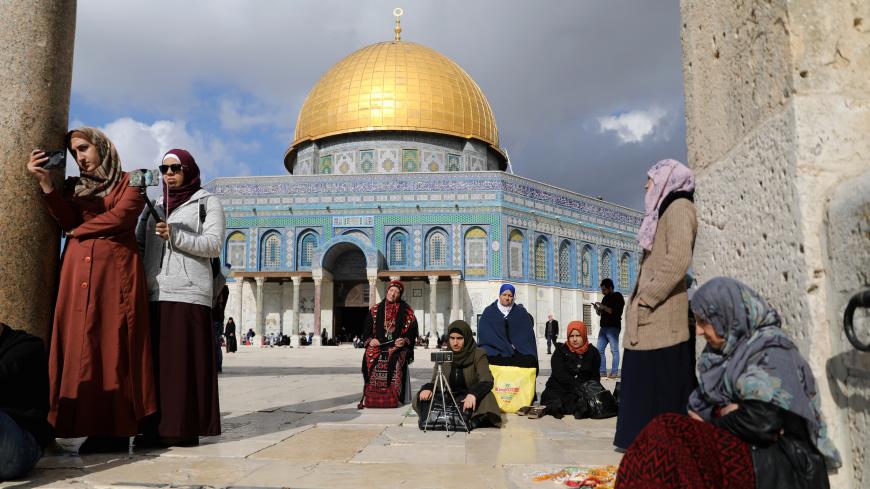 Worshippers sit around before Friday prayers on the compound known to Muslims as Noble Sanctuary and to Jews as Temple Mount in Jerusalem's Old City, as Palestinians call for a "Day of Rage" in response to US President Donald Trump's Dec. 6 recognition of Jerusalem as Israel's capital, Dec. 15, 2017. - REUTERS/Ammar Awad

The fallout from US President Donald Trump’s Dec. 6 decision to recognize Jerusalem as the capital of Israel is just starting to be felt, and Tehran seems ready to capitalize.

Although four Palestinians were killed in clashes with Israeli security forces in the West Bank and the Gaza Strip on Dec. 15, it would be a mistake to judge the reaction to Trump’s decision simply by the levels of violence on the “Arab street” just two weeks out.

As Daoud Kuttab writes, the US decision has unified Arab ranks and put Jerusalem at the top of the Islamic agenda. At Arab and Islamic leadership summits, the usual talkers and final statements on Jerusalem will no longer suffice. Muslims around the world, and especially in the Middle East, may ultimately hold their ruling elites accountable for an epic failure of leadership. Two weeks is the beginning of the beginning. This crisis will have a long fuse.

Trump’s decision was a windfall for Islamic Jihad, which is likely behind the increased rocket fire into Israel from Gaza. “In contrast to Hamas, which has chosen a mainly passive role at the moment regarding the Jerusalem proclamation,” Shlomi Eldar explains, “sources in Israel’s security system identify aggressive operational activities by Islamic Jihad. True, the organization did not accept responsibility for the rocket fire on Israel, but the type of rockets fired twice this week on Ashkelon turns the spotlight mainly in Islamic Jihad's direction. While Hamas views Salafist organizations as a real threat to Hamas' sovereignty and rule over Gaza, Hamas has a close relationship with Islamic Jihad. The military wing of the small, militant Islamic Jihad organization, called the al-Quds Brigades (Jerusalem Brigades), is estimated to number between 1,000-1,500 armed fighters. Hamas views these as its 'brothers in arms.”

Eldar adds, “The military alliance between the two organizations has known ups and downs over the years, but Hamas has never tried to disarm Islamic Jihad. There are two reasons for this: Both groups are supported by the same ally, Iran, and the cooperation between the military wings of the two groups served Hamas’ goals. It can be estimated that the two organizations cooperate in the underground tunnel digging project. In times of crisis, when facing threats from Israel, Hamas and Islamic Jihad work together. They combine forces and coordinate their positions.”

Eldar concludes, “Trump’s Jerusalem proclamation disrupted the tacit understanding between the two groups and renewed their war over public opinion in the Gaza Strip. While Islamic Jihad viewed the developments as an opportunity to take over the leadership of the Palestinian struggle, Hamas found itself in a Catch-22. On the one hand, it wants to avoid an all-out war with Israel, and on the other hand, it does not want the Palestinian public to view Hamas as forfeiting Jerusalem — and even preventing other organizations from retaliating. That would be a stigma that Hamas could not tolerate, and that may be why the rockets launched at Israel this week were probably carried out with Hamas’ tacit agreement.”

King Abdullah II of Jordan, one of Washington’s most valued allies, is reeling from the decision. Osama Al Sharif reports that Jordan “sees the vague US recognition, which did not mention East Jerusalem by name and only referred to freedom of worship in the Holy City, as threatening its own role as custodian of Muslim and Christian sites in the occupied city.”

Sharif said, “Abdullah’s concerns go beyond the immediate effects of the Trump announcement, which is seen here as having delivered a fatal blow to the two-state solution. The escalation of Jordan’s diplomatic offensive against its most important financial and military backer underlines its anxiety over the long-term ramifications of the US move.”

Trump’s decision on Jerusalem represents the gravest challenge to US-Jordan relations since Abdullah’s father, King Hussein, backed Iraqi leader Saddam Hussein’s seizure of Kuwait in 1990. The Jordanian monarchy exists on the razor’s edge, and cannot ignore the outrage of its citizens on this one. Abdullah can’t stomach talk of a “Jordan option” for Palestine, as Jordan already has a population that is half Palestinian, and has instead “chosen to up the ante through a sustained diplomatic offensive and [that is] why he is backing Abbas, who has adopted extreme anti-US positions. But the big question here is: How far would the king go in opposing the US move, and Trump in particular, without risking a backlash that could hurt his strategic relationship with Washington? At a time when Jordan is becoming increasingly dependent on US economic and military aid, estimated at $1.2 billion in 2017, and as Amman and Washington seek to fortify a long-term security agreement, the king’s gambit looks risky at best.”

Meanwhile, US-Turkey relations have sunk to new lows, if one thought that were even possible. Turkish President Recep Tayyip Erdogan convened an “extraordinary summit” of the Organization of Islamic Cooperation in Istanbul on Dec. 13 in response to the US decision on Jerusalem. At the same time, US national security adviser H.R. McMaster fingered Turkey and Qatar as key sponsors of “radical Islamist ideology.” The Turkish Foreign Ministry termed McMaster’s comments “baseless” and “far beyond reality, astonishing and unacceptable.”

Cengiz Candar writes that all this means that a “train crash between Ankara and Washington is more likely than the two erstwhile but estranged allies' cementing their strategic partnership.”

And this brings us to Iran, where Trump’s decision on Jerusalem has unified pragmatists and hard-liners. “The ultimate irony of the Jerusalem debacle is once again that Iran has been given the upper hand without having lifted a finger,” writes Reza Marashi. “Indeed, with the peace process dead, most of the world is blaming Trump, Israel and Saudi Arabia for tearing the region apart. But Jerusalem is only the latest in a long line of missteps over the past year that Iran has capitalized on. This has left Rouhani in a position in which he can now work across the political spectrum to reconnect the Islamic Republic’s ideological goal of opposing Israeli occupation of Palestinian territory with its geopolitical goal of avoiding international isolation — with increased international support for both objectives. Iran may not have drawn it up this way, but it will gladly accept the freebies being handed out by Washington, Tel Aviv and Riyadh.”