After Trump’s Jerusalem declaration Hamas found itself in a Catch-22: While it wants to avoid clashes with Israel, it also does not want the public to view it as hindering armed action in response. 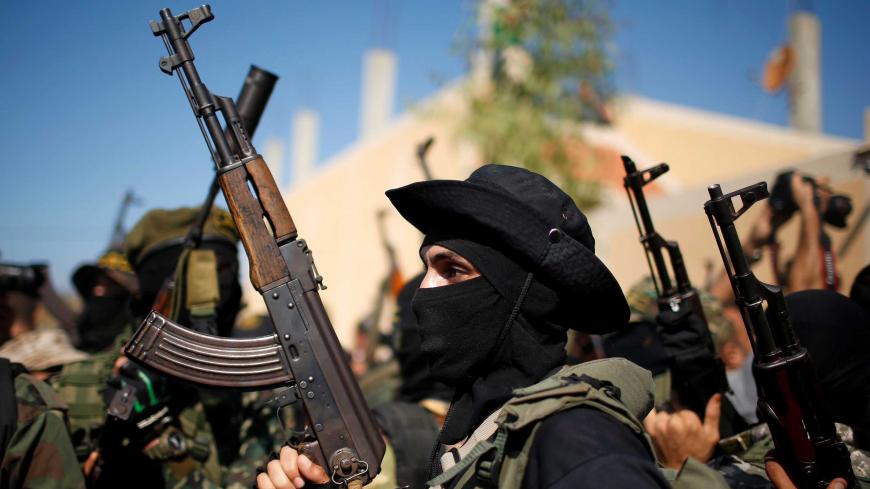 Palestinian Islamic Jihad militants hold up their weapons as they take part in the funeral of their comrade in the central Gaza Strip, Oct. 31, 2017. - REUTERS/Suhaib Salem

In recent days, the Palestinians have returned to launching rockets from the Gaza Strip at Israeli communities. On Dec. 11, Israel’s Iron Dome missile defense system intercepted a long-range rocket that was fired toward the town of Ashkelon. The Israel Defense Forces (IDF) reacted with relative restraint and only shelled a few Hamas targets in Gaza to avoid being pulled into an armed skirmish. But the measured response did not achieve its goal. Only 24 hours later, another long-range rocket was fired at Ashkelon.

The firing of long-range rockets requires relatively complex deployments; it cannot be done in hiding, far from the eyes of Hamas’ security force. It is also doubtful that small Salafist organizations have the required technical abilities to launch these rockets. Instead, the chances are that Hamas’ military wing or Palestinian Islamic Jihad’s Al-Quds Brigades — groups that the IDF frequently labels “Hamas’ operational contractors” — are behind the rockets.

The assessment is that this week’s launches were carried out by members of Islamic Jihad, while Hamas stood by and did not stop them. This is despite the fact that the Hamas heads are not interested in another war at the moment — no more than the Israelis.

True, on Dec. 7, Hamas political bureau head Ismail Haniyeh called on his people to begin a new intifada, in response to President Donald Trump’s Jerusalem proclamation. But there is a difference between a grass-roots uprising in the form of individual attackers (which are not attributed to Hamas and are not likely to invoke military retaliation from Israel) and a broad-based military confrontation that may well endanger the Hamas regime again. As I wrote in Al-Monitor Dec. 11, Israel’s evaluation is that Hamas wants a small-scale uprising in which civilians initiate acts of terror while the movement’s leadership sits on the fence and gives support from afar — in words, not in actions. This is what Hamas did during the individual terror wave that erupted in October 2015.

Hamas wants to divert public opinion from the terrible economic distress in the Gaza Strip to an emergency situation vis-a-vis Israel regarding Jerusalem, but without getting dragged into a war that will lead to thousands of deaths and massive destruction of Gaza Strip infrastructure, as had been the case in the 2014 Israel-Gaza conflict (Operation Protective Edge).

In contrast to Hamas, which has chosen a mainly passive role at the moment regarding the Jerusalem proclamation, sources in Israel’s security system identify aggressive operational activities by Islamic Jihad. True, the organization did not accept responsibility for the rocket fire on Israel, but the type of rockets fired twice this week on Ashkelon turns the spotlight mainly in Islamic Jihad's direction. While Hamas views Salafist organizations as a real threat to Hamas' sovereignty and rule over Gaza, Hamas has a close relationship with Islamic Jihad. The military wing of the small, militant Islamic Jihad organization, called the Al-Quds Brigades (Jerusalem Brigades), is estimated to number between 1,000-1,500 armed fighters. Hamas views these as its “brothers in arms.”

The military alliance between the two organizations has known ups and downs over the years, but Hamas has never tried to disarm Islamic Jihad. There are two reasons for this: Both groups are supported by the same ally, Iran, and the cooperation between the military wings of the two groups served Hamas’ goals. It can be estimated that the two organizations cooperate in the underground tunnel digging project. In times of crisis, when facing threats from Israel, Hamas and Islamic Jihad work together. They combine forces and coordinate their positions.

The main issue over which the two organizations disagree is in regard to public opinion — the struggle for hearts and minds. Islamic Jihad leadership in Damascus and heads of the organization in Gaza invest much effort trying to convince the Palestinian public in Gaza that they are the ones leading the struggle against Israel, while Hamas is bound by governmental, political and diplomatic constraints that divert them from the path of jihad. Islamic Jihad people tell the Gaza residents that despite the large army Hamas established in the Gaza Strip, it cannot fight for them over the future of Palestine and Jerusalem. In this challenge posed by Islamic Jihad, Hamas is always conducting a rearguard battle. It must find the balance between its roles as ruler, restrainer and supervisory agent and maintaining its image as the one to lead the armed struggle against Israel.

In the past, when Hamas heads felt that Islamic Jihad activists were adopting a too independent policy and were firing indiscriminately at Israel, Hamas’ military wing arrested Islamic Jihad people, arguing that the latter were harming Palestinian national interests. In some cases, Hamas even tried to show the Israelis their efforts in reining in the recalcitrant organizations in the Gaza Strip in order to avert another war in Gaza.

Even after Israel destroyed the Islamic Jihad’s underground tunnel on Oct. 30, in an explosion in which 14 members of the organization were killed, Hamas used all its strength to prevent the Al-Quds Brigades from retaliating powerfully. This was due to its concern over an unwanted confrontation with Israel.

Trump’s Jerusalem proclamation disrupted the tacit understanding between the two groups and renewed their war over public opinion in Gaza. While Islamic Jihad viewed the developments as an opportunity to take over the leadership of the Palestinian struggle, Hamas found itself in a Catch-22. On the one hand, it wants to avoid an all-out war with Israel, and on the other hand, it does not want the Palestinian public to view Hamas as forfeiting Jerusalem — and even preventing other organizations from retaliating. That would be a stigma that Hamas could not tolerate, and that may be why the rockets launched at Israel this week were probably carried out with Hamas’ tacit agreement.