While committed to keeping a quiet border with Israel, Hamas leaders fear the alliance between Iran and Islamic Jihad, and prefer Israel’s wrath to Iran’s anger. 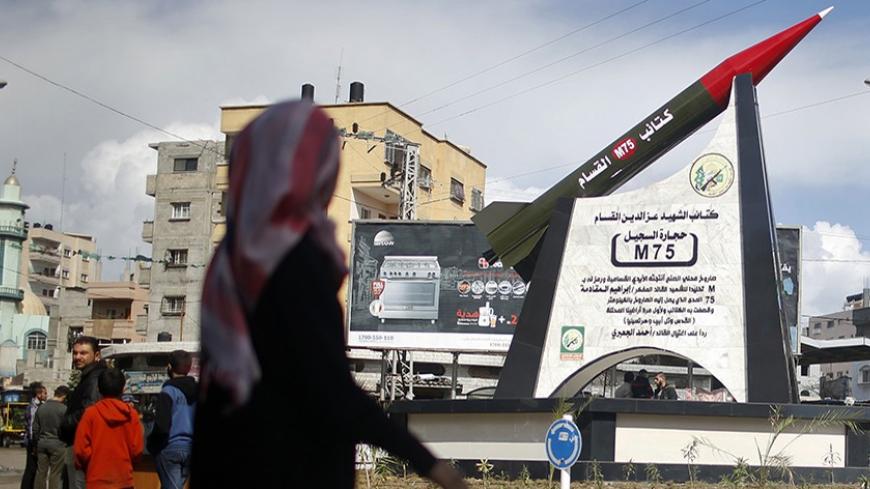 A Palestinian girl walks past a monument of a homemade M75 rocket in the middle of a square in Gaza City, March 10, 2014. - REUTERS/Mohammed Salem

At the end of Operation Cast Lead in January 2009 and after three weeks of Israel Defense Forces (IDF) attacks throughout the Gaza Strip, Palestinians had taken about 1,400 casualties, thousands more wounded and enormous damage to local infrastructure. The group responsible for this escalation, which is dragging Hamas and Israel into another bloody round of violence, is the same group that fired dozens of rockets on southern Israel March 12: Islamic Jihad.

About two weeks before the launch of Operation Cast Lead on Dec. 16, 2008, the IDF killed Jihad Nawahda, a senior member of the military wing of Islamic Jihad, in the West Bank village of Al-Yamoun. In response, the Al-Quds Brigades, the movement’s military wing, began firing a heavy barrage of rockets at Israel, destroying all efforts to bring about a cease-fire between Hamas and Israel.

Islamic Jihad did it again this week. One day after the IDF attacked a squad of Islamic Jihad militants, killing three Palestinian militants while they were firing a mortar right next to the border fence, the group has “succeeded” in dragging Hamas into an adventure that it hardly wants, and at the worst possible time. Islamic Jihad fired some 60 rockets at Israel, which responded by attacking dozens of targets in the Gaza Strip. The escalation continued on the morning of March 13.

It is interesting that Hamas has been unable to prevent Islamic Jihad militants from operating along the border with Israel, in an area that is supposed to be off limits to them. This, despite having recently stationed its Izz ad-Din al-Qassam Brigades in the area to ensure that no rockets are fired from it. But what is actually stopping Hamas, a group that even Israel recognizes as the sovereign authority in the Gaza Strip, from disarming the Al-Quds Brigades? Who or what is preventing fighters from the al-Qassam Brigades, whose military strength is several orders of magnitude greater than Islamic Jihad’s military wing, the Al-Quds Brigades, to enforce their authority? And what made the Hamas slogan of “concentrating military power in one hand” so hollow and meaningless?

Shortly after Hamas seized control of the Gaza Strip in July 2007 and expelled the Fatah leadership, the al-Qassam Brigades launched an extensive military operation to disarm the other organizations operating there. The Dormush clan, a powerful crime and terror family, was beaten up and other small organizations, including radical Salafist groups, were hunted down until they handed their weapons over to Hamas and promised to accept not only the organization’s authority, but also the principle of concentrating all arms in the hands of Hamas.

Only two groups were entitled to extensive “relief” from this campaign: the Popular Resistance Committees and Islamic Jihad. Both of them benefited and continue to benefit from generous aid from Iran, both financial and military. But of these two groups, Tehran’s favorite child is Islamic Jihad. The leader of the movement, Ramadan Abdullah Mohammad Shallah, is a welcome guest in the Islamic Republic, and militants from the Al-Quds Brigades regularly receive advice, training and arms from the Revolutionary Guard Corps. According to Israel, the weapons seized from the Klos-C were intended for Islamic Jihad and not for Hamas.

In the past, activists in the al-Qassam Brigades and the leader of the movement’s political branch enjoyed similar treatment. Iranian money flowing into Gaza did more than just keep the Hamas movement alive. It also gave it a vast military advantage over Fatah. The romance between Hamas and Iran began during the second intifada, after the Iranian regime was surprised by the movement’s military capacities and its becoming the most prominent group then launching attacks against Israel. Once the operational capabilities of Hamas were established and the Iranians saw that Hamas really did pose a threat to Israel, Iran’s relationship with Hamas drew closer, and the regime in Tehran decided to nurture these relations. In other words, Iran decided that it would send financial aid and arms shipments to Gaza on a regular basis.

Today Hamas is a political movement that rules the Gaza Strip, thanks to considerable Iranian aid. With that aid, it was able to defeat Fatah, exile it from Gaza and take over all the centers of power and authority. But that generous aid and strong backing, which provided Hamas’s leaders with a considerable (and sometimes exaggerated) sense of security, was suddenly cut off when Hamas decided to side with the rebels in the Syrian civil war. The deterioration of the relationship between Iran and Hamas happened very quickly, and the romance ended with a bitter feud.

Right now, the leaders of Hamas are looking at Islamic Jihad and coming to the conclusion that the Al-Quds Brigades are capable of doing to them exactly what Hamas did to Fatah seven years earlier. They can achieve military superiority, thereby posing a threat to Hamas and especially to its position of seniority in the Gaza Strip.

Iran favors Islamic Jihad. Hamas realizes this, and is not trying to disarm it. For its part, Islamic Jihad now knows how to take advantage of the crisis facing Hamas and the movement’s weaknesses. This leaves the leaders of Hamas caught between a rock and a hard place. On one side they have Israel, which threatens them with a large scale military attack if the rocket fire doesn’t stop. On the other side is Iran, which will not stand silently by if Hamas causes any harm to the members of Islamic Jihad or to Iranian interests in Gaza.

The leaders of the Hamas movement are being forced to evaluate the options and choose between Israel or Iran. Which frightens them more? Which poses a greater threat, as far as they are concerned? Which threat has far-reaching implications for their future? From which threat will they emerge with damage they can tolerate? Hamas tends to choose Iran.

In just a short time, Hamas lost all of its supporters, including Iran and Syria, and became an enemy of the new Egyptian regime. That's why Hamas would rather not exacerbate the rift with Iran, preferring instead to absorb a single Israeli military assault in Gaza, which will be over in a few days. On the other hand, attacking Islamic Jihad could put an end to the relationship between Hamas and Iran and ensure that the movement continues its drawn-out demise without any future prospects and without hope. Neither Hamas political bureau chief Khaled Meshaal nor Hamas Prime Minister Ismail Haniyeh have any interest whatsoever in reaching that point.

But as it turns out, Israel is also caught between a rock and a hard place, between Hamas and Islamic Jihad, between the enfeebled ruling power and the claimants to the throne. A military strike on Gaza along the lines of Operation Cast Lead or Operation Pillar of Defense will not only fail to embolden Hamas to take control over Islamic Jihad, but will actually further strengthen Islamic Jihad. So what can be done?

Israel’s response to the rocket fire was carefully thought out. The IDF attacked dozens of targets, most of them belonging to Islamic Jihad, and only one belonging to Hamas. This was a signal to Hamas to encourage it to do something, but at the same time, the heads of Israel’s security establishment are fully aware that there is not much Hamas can do.